10 curiosities about Croatia, Argentina’s next opponents 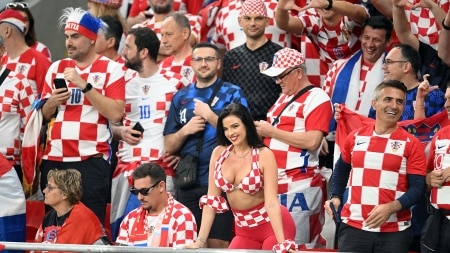 in football they can repeat the final

Football, as in almost all European countries, is the main sport. And they have 3rd place in the World Cup in France 98, and most recently 2nd place in Russia 2018. Curiously, if they beat Argentina, and France does the same with Morocco, they will have a repeat of the last World Cup final. , Its best player in history, Luka Modric (Real Madrid, 38 years old) was present in Russia and then in Qatar.

The tie, as the name suggests, is a Croatian invention.

The birth of the current tie dates back to the late 17th century, with the arrival in France of Croatian mercenaries, who wore a piece of white cloth on their chest, which they called “hrvatska” (“Croatian”). in Croatian). The French loved the croquette, so they adopted it and called it “cravet,” which became tie in Spanish. During the French Revolution, the tie acquired a political value: the revolutionary wore it black, while the counterrevolutionary wore white.

Fingerprint recognition is an Argentine “invention”, from a Croatian

Ivan (Juan) Vucetić, the creator of the identification of people through fingerprints in Argentina, was born in 1858 on the island of Hvar, Croatia, before emigrating with his family to South America. A criminologist and anthropologist, he was a pioneer in identification systems that solved thousands of cases around the world.

an ancient country but born 30 years ago

Croatia is separate from Yugoslavia (South Slavic). In other words, despite having a thousand-year history, strictly speaking it was born after the collapse of the Soviet Union in 1991, which led to the disintegration of the nation apart from Croatia, Bosnia-Herzegovina, Slovenia. Macedonia, Montenegro and Serbian. he is the only one of them Its majority religion is Roman Catholic, Despite the differences and wars, in both Croatia and Bosnia, “hello” and “goodbye” are said with the same word: “bog”.

Homeland of the inventor of alternating current

Nikola Tesla was born in Smiljan, present-day Croatia. Considered one of history’s greatest inventors, he is the originator of alternating current, which greatly simplified the use of electricity in homes. Because he has Serbian ancestry, he is also considered to be of heritage from that country. He became a naturalized American, where he patented at least a hundred inventions.

Where was “Game of Thrones” filmed

The Balkan nation has dozens of cities that seem lost in time. One of them is Dubrovnik, its ancient walls contain the progress of the Ottoman Empire. The highly successful series with a medieval air, “Game of Thrones”, was filmed there. Even at present, tours of the filming locations are made.

It has barely 3.8 million residents, and is trending downward. is that Croats are more numerous abroad than in their country of origin. It is estimated that 7 million people in the world speak Croatian. In fact, it has the second highest emigration rate in the world after Ireland. In such a diaspora, one must take into account the harshness of the former Yugoslavia, and then the war of independence.

islands for every taste

With a long coastline, it has 1,200 islands and islets, second only to Greece in that number. For this reason, tourism is a strong point and represents no less than 15% of the country’s GDP. Its beaches display extremely crystalline waters, and have been home to Madonna, Bill Gates, Beyoncé and Steven Spielberg. As a counterpart, there are some islands that are considered “anomalous” because they are completely rocky, without vegetation, as if they belong to deserts.

Croatia, although inserted into Yugoslavia during that war, was marked by its role on the side of Nazi Germany. This was due to the actions of the so-called “Eustaches”, led by Ante Pavlić, who espoused a perceived racial superiority over the Serbs. With the collapse of the Axis, many of them fled to Italy and South America.

They have the peculiarity of wearing a single square shirt with white and red colour. Its flag, red, white and blue, is the result of the merger of the Kingdoms of Croatia and Slavonia (whose flag was blue and white) in 1848.

How the Golden State Warriors and Stephen Curry Build a Dynasty