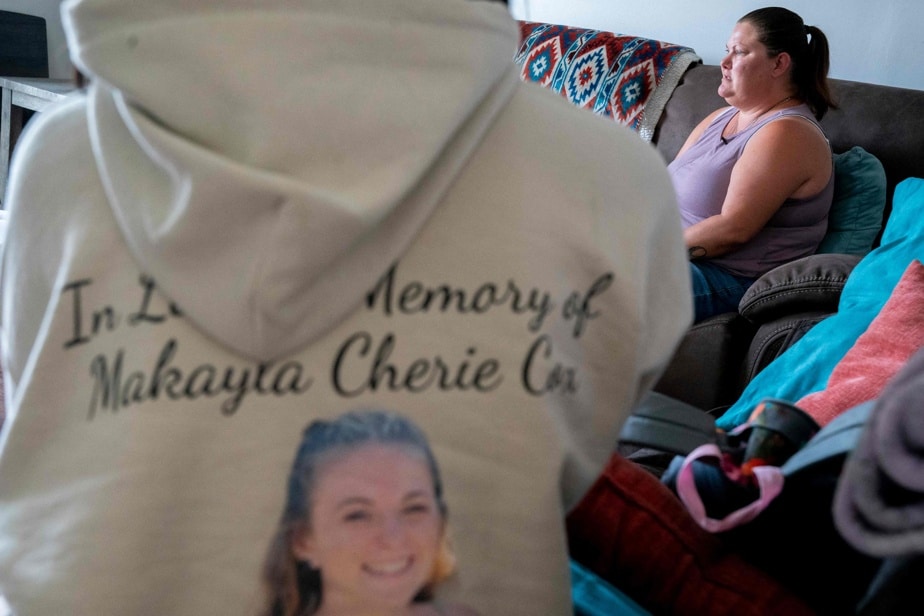 (Virginia Beach) Makayla Cox, an American high school student in Virginia, thought she was taking painkillers and sedatives given to her by a friend.

But the pill he swallowed two weeks after he turned sixteen turned out to be fentanyl, a synthetic opiate 50 times more potent than heroin. She died almost immediately.

One January evening, after watching a movie with her mom Shannon, Makayla looked great as she went to her bedroom with her dog, a husky, who often slept on her bed.

But the next morning, Shannon found Makayla half-sitting, leaning against the head of the bed, an orange liquid flowing from her mouth and nose.

“She was very tough. I shook her, shouted her name, called for help,” Shannon told AFP. “My neighbors came and tried to resuscitate her, but it was too late. After that, I don’t remember much. »

In the United States, the opiate crisis is reaching catastrophic proportions.

More than 80,000 people died of opiate overdoses last year, mostly caused by designer drugs like fentanyl — seven times the number a decade ago.

“This is the most dangerous epidemic we have ever seen,” said Judge Ray Donovan, a senior official with the US Drug Enforcement Agency (DEA). “Fentanyl is unlike any other illicit drug, it is instantly lethal. »

And the number of deaths among young people is growing especially fast. In 2019, 493 American teenagers died from drug overdoses. In 2021, there were 1146.

They purchase counterfeit medicines through social networks. And, without knowing it, they take pills containing fentanyl.

They often replace the name of the drug with emojis. Thus, highly addictive oxycodone takes the form of a half-peeled banana. Xanax, tranquilizer, chocolate bar.

According to Wilson Compton, associate director of the US National Institute of Substance Abuse, the number of Americans using drugs has remained fairly stable in recent years, but how dangerous these substances are is changing.

Fentanyl is so powerful that the difference between life and death is less than a gram.

“It takes a very small amount for it to turn into a poison that stops you from breathing,” Wilson Compton told AFP.

In the United States, most of the illegal fentanyl is produced by Mexican cartels from products shipped from China.

This drug is good business for these criminal groups because the effectiveness of fentanyl makes a smaller dose enough to fill a pill.

A kilo of pure product bought for about $12,000 turns into half a million more easy-to-carry tablets that can cost up to $30 each.

Last year, the DEA seized almost seven tons of fentanyl, enough to kill every American. Four out of 10 tablets contained a lethal dose.

In the lobby of the drug enforcement agency’s headquarters, pictures of “fentanyl faces” hang on the walls. The collection of portraits pays tribute to a dozen people whose lives were recently taken by drugs.

Under one of them: “Makayla -16 forever”

A model student and cheerleader, the young girl loved to draw, play with her dogs and hoped to study law at university, says her mother, Shannon Doyle, 41.

Since her parents’ divorce, Makayla has struggled with pandemic-exacerbated anxiety.

Last summer, a friend introduced him to counterfeit drugs.

The blue pills found in Makayla’s bed were actually fentanyl. The police investigation is ongoing but has not yet resulted in any arrests.

“Before, when you were addicted to drugs, you had 5, 10, 15 years to try to beat the addiction,” explains Shannon Doyle at his home in Virginia Beach, a coastal town about 330 km south of Washington.

You don’t have that chance anymore. »

The Drug Enforcement Administration (DEA) has launched a fentanyl risk prevention campaign, and the initiatives are aimed at increasing the availability of naloxone, an antidote that can save a person from overdosing.

Makayla’s ashes rest in her bedroom, a room that Shannon still looks into in the morning and evening, as he did in life.

On Makayla’s behalf, she set up a foundation to try to prevent such tragedies – a way to deal with her grief, she says.

The teen’s best friend, 16-year-old Cadence Blanchard, is spending her first summer without her. She is trying to fulfill their shared dreams: to get a license and go to the beach.

But for Makayla, “the future will never come,” she stresses. “She will never carry out any of the projects that we presented together. »