2022 in America: From the war in Ukraine to the re-emergence of Trump 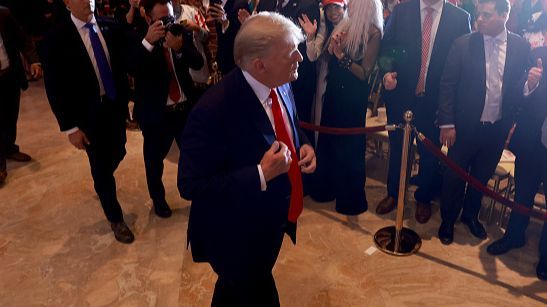 The end of a year marked internationally by Russia’s war in Ukraine, the ravages of the pandemic and the consequences of it all: supply shortages, energy crises and high uncertainty. after result 12 months in a row with the same conditionit has become a general price rise That even in the United States the middle class has been shaken to its foundations.

inflation The result, in turn, has been the protagonist of the recent midterm elections, in which Biden survived better than expected while for the bad omens of the last elections Republican Party duration Separate Among those supporting Trump, the next presidential candidate again, and Ron DeSantis, the brand new conservative sensation.

The pandemic has taken away a lot from us. But as tough as it has been, there are bright spots everywhere.

Our kids are back in school. People are back to work. And if we keep doing our bit and getting vaccinated, COVID won’t be able to control our lives.

We are making real progress. pic.twitter.com/o1agSlxjKq

On the way, Democratic leader Nancy Pelosi said goodbye Progressive presidency of the House of Representatives and with it a long career at the forefront of politics. and all the time Country remains polarizedAs seen after the Supreme Court struck down abortion rights, and plunged into a ideological war,

Economic data has been more and less in the last few months. Recent upbeat results on employment data and household consumption have raised hopes that the recession experts expect next year could be avoided or mitigated.

In fact, data from Unemployment already show levels similar to those before the pandemic (3,5%) And this internal consumption the country has developed 0,8% Compared to the previous quarter, above expectations. But these figures will mean that the Federal Reserve will continue to keep interest rates high to control inflation, and markets will not react well.

Washington’s support for Kyiv has been clear since the start of Russia’s war in Ukraine. in all these more than 300 days of struggleAccording to Secretary of State Antony Blinken’s final words on the matter, the Biden government has managed to “convince the world” to believe that the invasion was a “strategic failure”. In addition to financial support, the collaboration includes hundreds of drones for strike and surveillance missions, as well as thousands of Javelin anti-tank and Stinger anti-aircraft missile systems.

“Since February 24, we have brought together dozens of allies and partners to boost economic, humanitarian and security assistance to the Ukrainian people in defense of their democracy, their sovereignty and their country’s independence. our collective support, which now includes $1.85 billion in military aidcombatants in Ukraine to retaliate, liberate their population and regain their territory”, Blinken added following Volodymyr Zelensky’s recent visit to the US Congress to demand more aid.

Meanwhile a controversy has arisen within the country conflict between the states and the federal government, Over the year, a dozen states have implemented mechanisms to develop so-called “parental rights bills,” giving parents increased oversight over what their children learn in public schools, most recently it gave rise to controversy.

based on books Topics such as racism, discrimination based on sexual orientation, written directly by African-American people or members of the LGTBQ+ community They are being questioned to the point of being withdrawn from the school curriculum of public libraries and educational centres. This censorship has arisen, in some circles, as a reaction to the development of WoWhen, Which was implemented after the success of the Black Lives Matter movements, against racist police violence and after the rise of MeToo, against sexual harassment and abuse.

In June, the country’s division deepened with the overturning of the landmark decision known as Roe v. Wade, which guaranteed abortion rights in the United States since 1973. This Supreme Court ruling by a vote of 5 votes to 4 opened the way for states that wanted to be able to make voluntary termination of pregnancy illegal in their territory.

And all this despite the fact that 55% of Americans consider themselves in favor of the right to decide, according to a poll conducted by Gallup at the time. this decision led to A cycle change that could last for many years, to the detriment of women’s rights.

On the other hand, the November midterm elections gave a Republican majority in the House of Representatives and a Senate majority to the Democrats. The latter managed to hold several governors in states that will be key to the upcoming 2024 presidential elections, such as Arizona and Pennsylvania, and unexpected support.

other results were Voter support for Florida Governor Ron DeSantis, which has been touted as a great conservative asset in the face of his party’s primaries and the official candidacy of Donald Trump for the presidency. The two will likely fight it out for the White House amid a split in the Republican Party, which will have to be decided between the two.

and he is Return Donald Trump announced last monthAlready in his candidacy speech Maga has revealed his intention to present himself as the country’s necessary savior according to the universe (Make America Great Again, his general election campaign slogan).

end of a democratic era

soon after, the past 17 Novemberprogressive leader Nancy Pelosi (From 82 years) announced that he was leaving the front line of politics and the presidency of the House of Representatives. Thus, an inevitable generational change occurred, verifying that the few main Democratic references, apart from Pelosi, are all octogenarians.

in these their own President Biden (80 years)who have not yet decided whether to seek re-election; James E. Clyburn (82)longest serving member of the black congressional caucus and Hoyer Walls (83)House Democrat Majority Leader, who also announced his resignation.

These last two and Pelosi have already been replaced by a new batch of politicians 30 years younger than their predecessors, becoming the youngest generation in power in several decades. And the challenge will be greater as the achievements during these years have been many and far reaching. This was remarked upon by Pelosi in her resignation speech, recalling 90 party ladies who choose to hold positions of power than currently 12 that when she ran for her first internal election, in 1987,

another test for 2023 It comes with many, perhaps too many, political, economic and social unknowns.