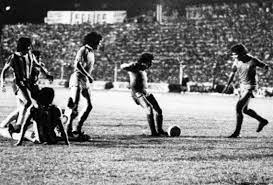 The Independent will face Toleres for the Copa Argentina, with whom they already knew how to make history 44 years ago.

The victory against Newells is over, and now we have to quickly turn our heads down in a duel with Talares. Next Wednesday, starting at 4:00 PM, Independiente and Córdoba will face each other in the Chaco for the quarter-finals of the Argentine Cup. The meeting promises to be difficult, But history shows that the greatest already knows how to overcome adversity.

On 25 January 1978, when Riccardo Bocchini turned 24, El Rojo was a hero without incident. At Córdoba, and before the tee, Avelaneda’s men had to improve to 1–1 in the double viscera, and the approach was complicated. Those led by Jose Pastoriza won 1–0 with a goal from Norberto Outs, But then the Roberto Barreiro show began.

With a non-existent penalty, the locals equalized through Riccardo Cherini, and then converted it thanks to a goal from Angel Bocanelli. Following the anger of the independent players, Barreiro expelled Omar Larosa, Rubén Galvan and Enzo Trocero. But it ain’t gonna stay there, there’s gonna be another one, And it was nothing more and nothing less for the birthday boy.

After an excellent game between Mariano Biondi and Daniele Bertoni, the ball was dropped at the foot of 10. Yes, fate is best called, the only one, who knew it had to appear to turn history, and it was so. Bocchini got in the middle of the local defense in the field, and with incredible Vaseline, he made the final 2-2. Yes, off goal, the Independent were the champions with two fewer players.

Now the two have another local cup match coming up, this time in Chaco, where Rojo will try to reach the Argentina Cup semi-finals. History testifies to the devil, but even so, the test will be tough, and Cordoba still feels the pain of that achievement. Win it, King!