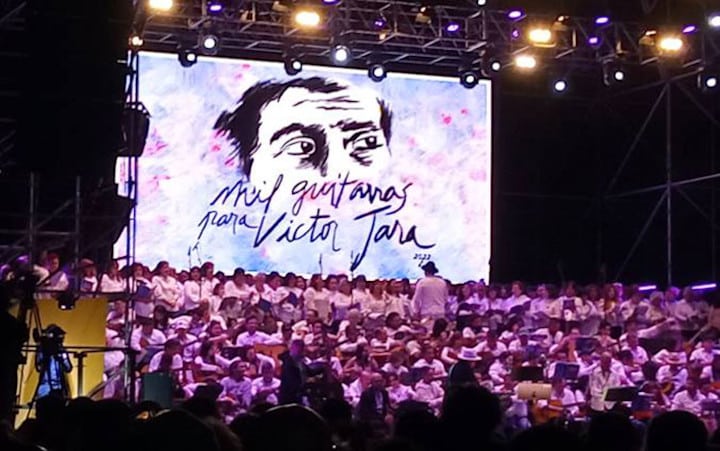 Thousands fill Plaza de la Paz during the Thousand Guitars concert for the Victor Jara concert, in the Chilean capital, which resumed in person after a two-year ban due to COVID-19.

Nearly twenty artists took part last night to pay tribute to the legendary singer-songwriter and emblematic figure of Nueva Canción, who was assassinated by the dictatorship of Augusto Pinochet in 1973.

Songs such as El Cigarito, I Remember You Amanda and Plagaria a Un Labrador were performed during the concert organized by the Cultural Corporation of Recoleta Commune.

For the first time, the Citizen Choirs performed by Victor Jara, directed by the troubled Francisco Villa and Ibarra Roa brothers.

Jara was an artist with a strong social and political commitment and supported the Popular Unity government of President Salvador Allende, who named him a cultural ambassador.

After the coup of September 11, 1973, he was arrested when he went to perform his duties at the State Technical University and was subjected to long sessions of torture, until his assassination on the 16th of the same month. According to the post-mortem report, there were 44 bullet marks on his body.

“It is an act of memory, repair, truth and justice,” declared Daniel Jadu, the mayor of the municipality.

Jadoo thanked the guitarists, artists and everyone who paid this tribute to the singer and composer in his 90th year of birth.

The mayor called on all Chileans to continue working to build the country they have so dreamed of and recalled that the struggle today is to obtain a new constitution that replaces the one in force since the dictatorship.

Today, with this act of love, we are meeting again after a long time without seeing each other’s faces, the Communist Party extremist also said, referring to ending the use of masks from this weekend.

Zara concluded the concert with the symbolic song The Right to Live in Peace to condemn the war against Vietnam, but several versions of which have been written, including the most recent one during the 2019 social outbreak. Condemns repression and expresses willingness to bring about structural changes in the country.