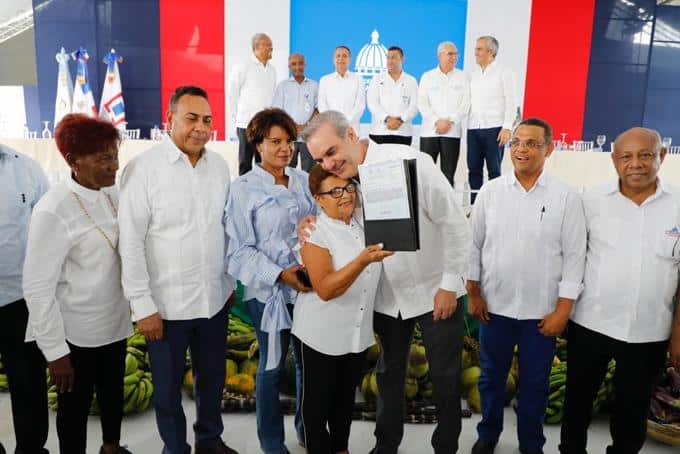 Yesterday, the President of the Republic, Luis Abinador, granted 535 property titles to more than 500 families in the municipality of Mazagual in Monte Plata, while in San Luis he commissioned an electrical substation and began construction of the Washington Capital Photovoltaic Park Solar Park. 2 and 3

During the distribution of titles, the President said that it gives government confidence to citizens, gives hope to families and complies with a constitutional mandate that guarantees people all rights to enjoy good housing.

“I am a firm believer, and I have always said so, that there is no more effective way to promote change than by getting people to have their roof and recognizing the right to land,” Abinadar said at the ceremony. Distribution.

The President highlighted the work of the State Land Titling and the Execution Technical Unit for the Dominican Agrarian Institute, which he said joins the norms and efforts to continue this splendid job of recognizing the property rights of our compatriots at the national level Huh.

The government’s investment in issuing them was RD$42,800, representing a personal cost of RD$80,000.

Merido Torres, Executive Director of the Executive Technical Unit for State Land Titling, stressed that this is the third installment to be done in Monte Plata, with the first on 23 November, the second on 20 March this year and so forth. They add up to 1,419 certificates of title distributed in this municipality.

The Director of the Dominican Agricultural Institute, Francisco Guillermo García, expressed that the properties of the settlement are devoted to mixed livestock, but also to the production of corn, pumpkin, sweet potato, pigeon peas, yams, bananas, yucca, cocoa, youtia, passionfruit are dedicated. Fruit, coffee. , sour orange, banana, among others.

On behalf of the graduates, Pablo Antonio Delgado expressed the feeling of being part of the hero receiving the title of his estate.

in st louis
Yesterday, the President put the Cabreto-San Luis substation in operation at 345/138 kV, an electrical work that will improve the quality of energy supplies given to citizens and expand the transport capacity of the transmission network.

This work was done with an investment amounting to RD$1,455.6 million.

The President reaffirmed that with the start-up of the Cabreto substation, it would allow for greater reliability in the National Interconnected Electric System (SENI), greater energy transport capacity in the South, North and East of the country and allow the entry of new electric power systems. generation projects.

With the commissioning of the substation, several transmission lines connecting the new Cabreto substation at 345/138 kilovolts (kV) were also left in operation.

The substation had an investment of RD$1,455.6 million, which was financed by the KFW Development Bank (Kreditanstalt für Wiederaufbau, for its abbreviation in German), design, supply and assembly by the German company Siemens, as well as the consulting company ETEE and supervision . ETED.

These are two projects with a maximum power of 50 nominal MVA each and each park will have over 149,000 photovoltaic panels, 20 inverter-transformer stations, 138 kV 60 MVA altitude substations and approximately 25 km of line at 138 kV.

The Minister of Energy and Mines, Antonio Almonte, highlighted the incentives given to renewable energy projects by President Abinador.

“It’s not a fashionable issue, it’s a matter of pre-planning before coming to power,” Almonte said.

Schauffele has Scottish advantage of 2 shots, looks for the second consecutive victory

Jump 165Hz at the lowest price ever with this gaming monitor