After a year of violence, American schools try to tame tensions 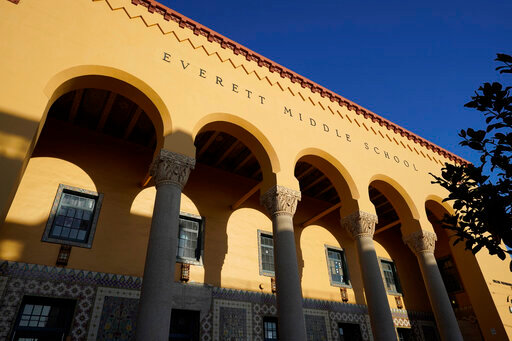 SAN FRANCISCO ( Associated Press) – The first week of school was supposed to mark a triumphant return to the classroom at Everett High School in San Francisco after more than a year of distance learning.

But last fall, when computer science teacher Yesi Castro-Mitchel greeted a class of sixth graders, one of her students started hitting her again and again.

Castro-Mitchel wrapped her arms around her head and hoped the blows would stop. She remembers the stunned silence in her class as the other students witnessed the attack. The teacher suffered a concussion, a dislocated jaw, chipped teeth and hearing loss in her left ear, which now requires a hearing aid.

In America, one of the most difficult school years was also one of the most brutal. Experts who track school behavior across the country say fighting and other violent behavior, including shootings, appear to have increased. Now, as students go on summer break, schools are analyzing what went wrong and how to fix it.

In Everett, many of this year’s problems were no different than they were before the pandemic, but “they were absolutely more serious, intense and more frequent,” said Chris Garza, a teacher in Everett for eight years and a spokesperson for the teachers’ union.

According to several teachers and parents, in addition to the attack on the teacher, fights between students broke out almost daily. As a result of one fight, a student was hospitalized for at least two days. In other cases, groups of students broke into classrooms, disrupting lessons and sometimes destroying school property.

Educators and psychologists say the pandemic has contributed to instability in schools, causing a surge in student mental health issues, trauma at home, a lack of social opportunities and a shortage of teachers and counselors that have reduced adult supervision and guidance.

There is no national data tracking school fights and assaults, but education officials across the country say violence has flared up more frequently and more acutely.

“No doubt we hear everywhere that schools are experiencing significantly more crises related to school violence and emotional behavioral crises,” said Sharon Hoover, co-director of the National Center for School Mental Health at the University of Maryland School of Medicine. .

The same problems are likely to resurface in the fall, she says, if struggling teens don’t get the help and structure they need.

Students in Everett have felt the effects of the pandemic keenly. About 70% of the school’s 600 students are Hispanic, many learn English, and most are economically disadvantaged. According to school social worker Bridget Earley, many have lost parents and grandparents to COVID-19 or lost their homes because families were unable to pay rent.

Castro-Mitchel said no one warned her that her assailant had behavior problems. After the attack, the teacher transferred to another school, but left before the end of the year as she struggled with post-traumatic stress disorder.

Several Everett employees have complained that the pandemic rule aimed at improving air circulation had the unintended effect of encouraging bad behavior. Teachers were not allowed to close and lock classroom doors, and groups of students who skipped classes roamed the hallways and broke into other classrooms during class.

According to the organization’s executive director, Mo Kanadi, reports from members of the National Association of School Inspectors suggest there have been more guns on school campuses, more assaults and more fisticuffs across the country.

The Clark County School District in Las Vegas, one of the largest in the country, said it would provide teachers with panic buttons after an increase in violence, including an attack on a teacher in April that left her unconscious in her classroom. County Police Chief Mike Blackie said the 2021-22 school year was the busiest in his department’s 40-year history.

Hoover said that when the pandemic hit, young people in particular lost what defined their lives: they were cut off from school and isolated from their peers.

Many schools have tried to address the root causes.

When students returned to Savannah High School in Anaheim, California, it was “fight after battle after battle,” said Penny Hatzis, the school’s lead counselor. The school has hired a restorative justice specialist who emphasizes mediation over punishment, although next year they are aiming for more balance with discipline. In October, they used the grant money to open a “relaxation room” where students could talk to a mental health consultant.

“We opened it up and saw a huge reduction in fights and discipline issues. It was night and day,” Hatzis said. The school also held support groups for bereaved students, LGBTQ+ students and others, sometimes several on the same day.

Savannah’s freshman, Clara Oliver, struggled with anxiety, which worsened when she returned to full-time school, and found it difficult to have face-to-face conversations with her classmates. For her, the rest room became a refuge. Over time, it became easier to communicate with people.

“A room would give us a break from everything,” she said. “When we were nervous about school, we just went to this room. There was someone to talk to, there were snacks, there were fidget toys and card games. We could relax and then go back to class and continue our day.”

In Everett, school authorities have attempted a “January reset” with new strategies for bringing students together, trying to make classes more fun and more social-emotional work with children, Earley said.

But they couldn’t do it. As elsewhere, the micron surge of the coronavirus pushed teachers into the background, exacerbating the personnel crisis at the school, which already lacked security guards and substitutes.

“In a year when mental health was more important than ever,” Early said, “she spent most of her time ‘putting out fires.’ She often served as a substitute.

Parents were worried about the safety of their children and urged them to stay away from dangerous areas.

“My son didn’t usually use the toilet. He waited until school was over,” said Dheanira Calaorrano, the mother of a seventh-grader who had not had a science teacher, a music teacher, or a physical education teacher for several months.

Principal Esther Fensel quit at the end of the school year and did not respond to interview requests.

During the year, she said, the school district hired an additional security guard, expanded coverage, and required students to lock cell phones during class.

Next year, Early said the school will open a grant-funded wellness center with a therapist and other staff to focus on students’ social and emotional needs.

“What all children need, especially children who have experienced trauma, is consistency and stability,” Early said. “We couldn’t provide them with this all year.”

Earthquakes caused by industrial activities: what are the risks and how can they be reduced?

Alcaraz now beats Djokovic and will play the final in Madrid