After declaring a state of emergency, the Peruvian government is considering imposing a curfew. They demand the intervention of the interior minister for repression. 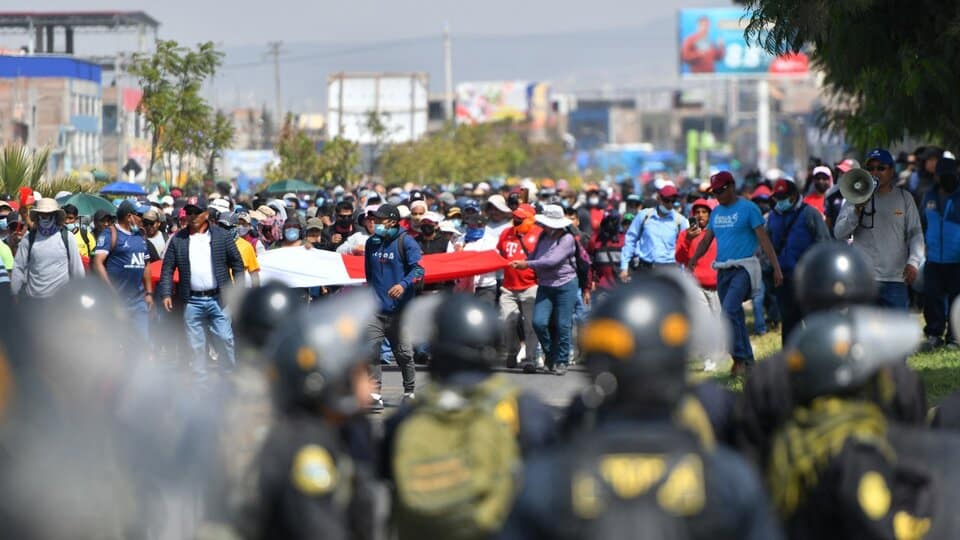 The Peruvian government announced this on Wednesday state of emergency throughout the country for thirty days while he evaluates the possibility of imposing a curfew. The left-wing Bankada Peru Libre, supported by other coalitions, called for Home Minister’s appeal, while Juntos por el Peru – also from the left – requested motion of no confidence in the prime minister

The government implemented the measure following protests and riots in various parts of the country in recent days, with seven confirmed deaths among protestors and over a hundred injured police officers.

Defense Minister talking to the press from the forecourt of Government Palace Alberto Otarola said that “It is approved to declare a state of emergency for the whole country, due to acts of vandalism and violence, the seizure of highways and roads that are already immobilized and controlled by the National Police and the Armed Forces; A strong response and authority from the government is required,

Minister Otalora informed that in a few hours it will be made official in a special edition of the official newspaper a man from peru the criteria by which it is decided national emergency 30 days, meaning that the Peruvian National Police, with the support of the Armed Forces, exercises control over internal order. “I want to remember that the declaration of a national emergency means Suspension of rights of assembly, inviolability of home, freedom of movement and freedom of assembly“, Otrola indicated. And he explained that the measure was motivated “so that citizens can have security and certainty that we are controlling the internal order and then we are going to ensure free transit and peace for all citizens, Stating that protecting strategic infrastructure is necessary to ensure the well-being and peace of the citizens. There is a possibility of imposing curfew, But they have to define the legal framework of the standard.

Protests that have taken place in recent days, particularly in the south of the country, call for Convocation of a Constituent Assembly, progress of elections, dissolution of Congress, resignation of President Dina Boluarte and release of former President Pedro CastilloIn custody for seven days after the failed self-coup.

This Monday, protesters attacked the airport and a dairy plant in Arequipa, the country’s second city. And this Tuesday they occupied a gas plant in the department of Cuzco and in different parts of the country there have been many roadblocks, looting of businesses or setting fire to public institutions.

Motion for objection against the Minister of the Interior

Spokesman for the Peru Libre Caucus, Flavio CruzWith the support of Peru Democrático, Peru Bicentenario and non-aligned parliamentarians, presented a Motion for interpolation against the Minister of the Interior César Cervantes, because of For the actions taken by the National Police of Peru in relation to the protests. The initiative wants Cervantes to answer a list of questions: if he considers himself responsible for the “bloody repression” and deaths, and If you are planning to resign from your post.

no confidence motion for the new prime minister

Peruvian Women’s Congress Sigrid Bazan and Ruth LukeFrom the leftist group Juntos Por el Peru, presented this Tuesday in Parliament Motion that seeks to censure the recent Prime Minister, Pedro AnguloFor the “disproportionate repression” of the police in the protests.

The resolution, which Luke and Bazan shared on Twitter, noted that the actions taken by the government “have not contributed at all to the resolution of the conflict and, on the contrary, His statements and especially the measures adopted by his cabinet are dangerous for the restoration of peace and social tranquility.“. Angulo was appointed three days ago as prime minister of the government headed by President Dina Boluarte, who took office last Wednesday to replace former President Castillo.

IMDb. According to, the 10 Best BioWare Video Games Ranked

Barcelona pledges its future to a quick resurgence