After recapturing Kherson, Ukraine is considering a new counteroffensive in the east and south 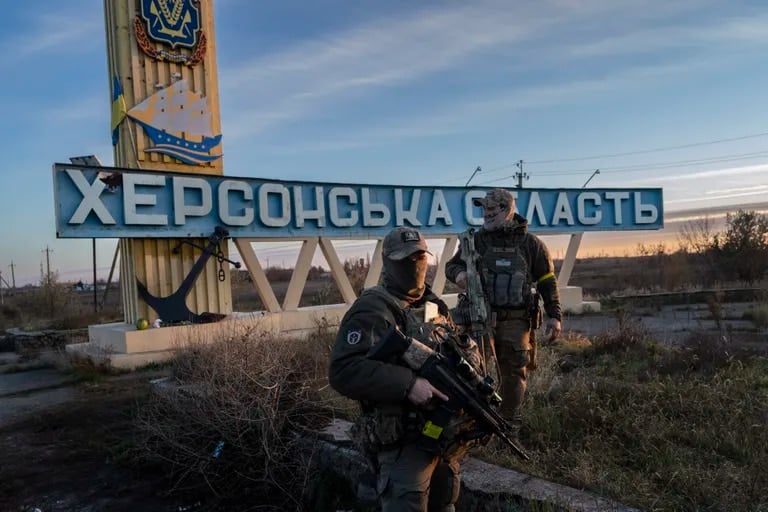 ZAPORIJIA.- The way to victory for Ukraine, or at least the clearest way, It probably opened to the south through the marshes and lowlands of the Zaporizhia region.

After the withdrawal of the Russians from the city of Kherson, the only regional capital captured by the Russians since the invasion ordered by the President Vladimir PutinUkrainian forces had few options as to how to approach their next offensive to retake the territory they had captured and eventually expel the aggressor.

but now more attention is going to Zaporizhiathe southernmost front line and less than 100 miles north of the Sea of ​​Azov, Where Ukrainians aim to cut the “land bridge” linking mainland Russia to the Crimean peninsula, which the Russians illegally invaded and annexed in 2014. The Kyiv government also intends to liberate cities such as Melitopol and Enrhodar, where the region’s nuclear plant is located.

for his part, The Russian army is strengthening its defensive positions in the regionClear anticipation of the battles to come.

But beyond all reasonable speculation, there is little evidence of troop gatherings in the streets and military bases near the front line, nor is there any indication that the Ukrainians are preparing an offensive on Zaporizhia any time soon, Mujica and other analysts said.

Viktor Dadak, deputy battalion commander of Ukraine’s territorial security, can’t say whether his country’s next major offensive will take place in the region. “It’s a military secret,” says 35-year-old Dadak. “But I think the military secret will be revealed within a few days.”

In the middle of the year there were persistent rumors of an imminent Ukrainian counteroffensive in the Kherson region in the south of the country. Instead, he launched a lightning strike and surprise to the north, in the area of Kharkiv,

For now, Ukrainian soldiers in the Zaporizhia region appear to be on stand-by in the mud, waiting for the ground to freeze as winter progresses.

Dadak says these were the last few days Coldest since Ukrainian soldiers They are stationed in the area, and the ground is starting to freeze, but there is still a lot of mud and military vehicles can slip or get stuck. Dadak is hopeful that the conditions will improve in the coming days and the vehicles will have better traction.

A little more than a kilometer from the front line, Dadak walks across the field towards a group of soldiers who have taken refuge in the only possible place: under a row of bare trees that do little to block the biting wind . The bright sun overhead is deceptive: The temperature has dropped almost to the freezing point. The soldiers take turns warming themselves in a pit that barely has room for two cots and a salamander.

The main objective is to maintain that defensive position near the front line, and prevent the Russians from advancing north along a route connecting Zaporizhia with the Donetsk region.

But the long-term goal, Dadak says, is to push south to the Sea of ​​Azov. with the right impulse, Ukrainian forces may currently encircle the Russians on the east bank of the Dnieper Riverbesieged Kherson and the cities on the west coast.

According to Ukrainian intelligence, Dadak says, there are about 30,000 Russian troops on the east bank of the Dnieper in the Kherson region. Furthermore, to strengthen the Russian presence in Zaporizhia, the troops that had left Kherson were redeployed to the east. Since then, says Dadak, the artillery shelling has intensified.

Muzak says the density of Russian troops is higher, meaning there are more soldiers per square kilometer than at any time before the war. “If Ukraine attacks, it won’t be cheap”Says the analyst.

Although the flat terrain and the absence of rivers in the Zaporizhzhya region would facilitate the Ukrainian advance to the south, troops would have fewer places to hide.

“I think the Ukrainians are watching some areas for a possible counter-offensive,” says Muzyka. “And the most obvious is Zaporizhia, so it’s probably there.”

One of the Ukrainian military’s long-term goals, says Michael Kofman, an expert on Russian military forces at the Center for a New American Security, a Virginia-based think tank, will be to push south into the occupied city of Melitopol.

“Unknown whether they will attempt a delayed offensive in Zaporizhia in winter or next spring”Kaufman says.

Ukraine is trying to stabilize the front line in the city of Bakhmut in the Donetsk region, and a second group of forces is trying to push back Russian forces in the Lugansk region.

The question is whether the Ukrainian army has enough soldiers and ammunition to mount a southern offensive in the coming months, especially after suffering casualties at the Battle of Kherson.

For most of the day, Ukrainian towns near the front line were virtually abandoned, with residents only emerging from their bunkers at dawn, when the Russian shelling had subsided briefly. A month and a half earlier, during a missile attack on the town hall of the city of Gulyapol – the birthplace of Ukrainian anarchist revolutionary Nestor Makhno – the mayor and one of his aides were killed. And a more recent attack destroyed the city’s large public library, leaving behind a mountain of rubble.

A few steps away is a statue of Majno, surrounded by sandbags to protect it from shelling.

Deputy Commander Dadak says the Russians are using more helicopters than before, adding that a nearby Ukrainian unit supplied rockets for the specific purpose of shooting down Russian helicopters.

A small group of Ukrainian soldiers stationed a kilometer from the front line say shelling from Russian mortars and artillery has intensified.

“So we are night and day”, says a soldier who identified himself as Volodymyr while smoking a cigarette in a dark and cramped bunker, adding that the shelling has worsened since the liberation of Kherson.

The temperature is dropping fast, but Volodymyr is not worried about the winter, as he has been given plenty of warm clothes. “It doesn’t matter that this winter is very cold: the important thing is that it is not swampy.”

by Samantha Schmidt and Sergey Korolchuk

Technological Revolution In Education: How Does Technology Impact Student Learning?

The Chicago Bears added 3 more players, including Eddie Goldman and Artie Burns, to the COVID-19 Reserve / List, bringing the total to 5.