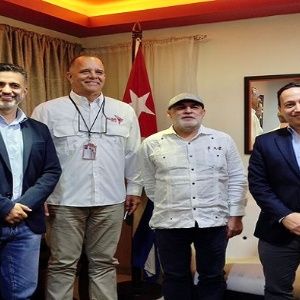 Sacha Lorenti, executive secretary of the Bolivarian Alliance for the Peoples of Our America-Peoples Trade Treaty (ALBA-TCP), arrived in Cuba on Tuesday to attend the XXII Summit of Heads of State and Government of the entity.

Upon arriving in the Latin American and Caribbean country, the politician said he felt “extremely privileged”, and noted that the member states are ready to hold the meeting, as well as celebrate the 18th anniversary of ALBA-TCP. .

In the same way, Llorenti thanked and welcomed the reception that Cuba had given him and Carlos de Céspedes Piedra, director of South America at the Ministry of Foreign Affairs, for “always being generous”.

Likewise, the ALBA-TCP secretary highlighted the company of Ruben Dario Molina, Vice Minister of the Venezuelan Ministry of Foreign Affairs for Asia, the Middle East and Oceania, and Raul Licossi, Vice Minister for the Caribbean.

From his account on the social network Twitter, Llorenti described the first meeting between the historical leaders of the Venezuelan and Cuban Revolutions, commanders Hugo Chávez and Fidel Castro, respectively, on December 13, 1994, saying that “ALBA began with that embrace.” Happened”.

Meanwhile, the Cuban Foreign Ministry, in connection with the commemoration on 14 December of the 18th anniversary of the creation of ALBA-TCP, specified that the entity is based on the principles of solidarity, social justice, cooperation and economic complementarity, which is the result of political. the will of its founders.

Scientists make a big breakthrough in the fight against COVID