ALBA-TCP remains a beacon of solidarity and hope 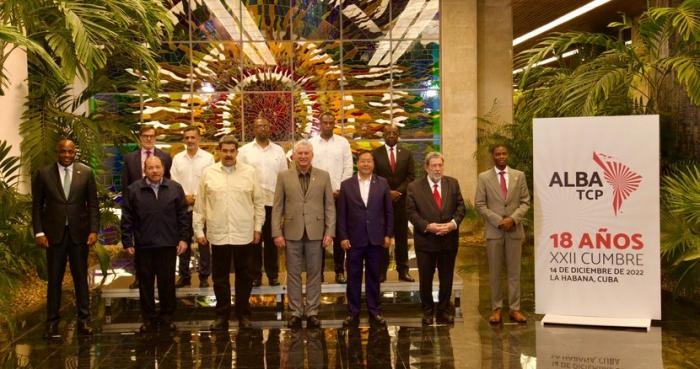 Eighteen years later, the Bolivarian Alliance for the Peoples of the Americas-Peoples Trade Treaty (ALBA-TCP) remains a beacon of solidarity and hope for our peoples. The XXII Summit of this Integration Mechanism, which met this Wednesday afternoon at the Palace of the Revolution, confirms the full validity of its founding objectives.

The meeting took place shortly after the conclusion of an extraordinary session of the National Assembly of People’s Power, convened at the Palacio de Convenciones to celebrate this new anniversary of the ALBA-TCP, born of the visionary drive of Fidel and Chávez. At the headquarters of the Presidency of the Republic, the heads of delegations from the ten member states were received by Miguel Díaz-Canel Bermúdez, First Secretary of the Central Committee of the Communist Party and President of the Republic of Cuba.

Following the official opening of the event, where the Cuban head of state gave a few words of welcome, the meeting was held behind closed doors, with the aim of evaluating a set of topics of interest on the regional agenda. Nicolas Maduros Moros, President of Venezuela; from Nicaragua, Daniel Ortega Saavedra; and from Bolivia, Luis Arce Catacora; as well as the Prime Minister of Saint Vincent and the Grenadines, Ralph Gonsalves; from Dominica, Roosevelt Skerritt; and from Grenada, Deacon Michel, along with other heads of delegation from member states.

Solidarity, peace… building together. ALBA countries have come to Havana this December, like so many others for the past 18 years, and together they continue to chart the best path forward for our people.

After the conclusion of the working day, where complementarity and unity became the protagonists, Nicolás Maduro Moros, the President of Venezuela, made statements to the press on various issues of vital importance to the region and which were at the center of the meeting.

Regarding the many more immediate challenges facing ALBA-TCP today and its importance for the region, the dignitary assured that “the tasks remain immense.”

«Commander Fidel Castro and Commander Hugo Chávez took the founding step, and demonstrated a great potential to generate a unifying dynamic throughout Latin America and the Caribbean; A unitary dynamism that has not been seen since independence, in the time of Bolivar”, the President assessed.

President Maduro later commented on these many challenges, reiterating the enormity of the tasks left by the two leaders, and that “they have to create integration with the capacity for action for the daily lives of citizens in our countries.”

All this, he stressed, “has been demonstrated in education, in health, in energy, despite imperialist attacks, despite being situationally weak for the time being, as we saw in the private meeting.”

ALBA has been strengthened to overcome these and many other attacks. This was also commented on by the Venezuelan President, who assured that now the member states are “re-launching Petrocarib with even greater force.”

And so, he insisted, “we must resume all programs, because ALBA, as a political, cultural, social and economic vanguard in Latin America and the Caribbean, must show in practice that it is capable of any better than other mechanisms that are known and moreover, we can generate solutions to the real problems of our people ».

The tasks of today – he stressed – are enormous, “What Fidel left us is a huge legacy, what Chávez left us, and the task of today is to increase commitment and a lot of creativity, a lot of Capacity and capability are needed.” Apart from a lot of union ».

Alba’s support for its people

In his statements to the press, the Venezuelan President also announced that as of 14 December, the Bolivarian Alliance for the Peoples of Our Americas has a new executive secretary, unanimously appointed by the member states: Venezuelan diplomat Félix Placencia.

Specifically regarding the events currently taking place in Peru, Maduro Moros explained: “We evaluate with great pain the tragedy that the Peruvian people are experiencing, the violence, the killing of large numbers of people in the streets , a large number of people were arrested, injured, persecuted, and how the coup was carried out».

ALBA has taken a step forward – he explained – “to qualify as a coup what has ended in Peru, and as a result we are going to act in different examples in Latin America.

«At CELAC we are going to speak directly with the President pro tempore of Argentina, President Alberto Fernandez, in order to respect the rights of the Peruvian people, to respect the rights of Professor Pedro Castillo and, moreover, one of our sisters, Peru, who is suffering a lot. facing a crisis, it has been carried forward in a peaceful, democratic and constitutional manner ».

about another matter that is also very important for the region, such as what happened with the 2023 census period by the oligarchs in Santa Cruz, Bolivia, and the response that the Luis Arce government has given to this issue President Maduro Moros commended him “It is no secret to anyone in Bolivia or Latin America that there was an attempt to destabilize Bolivian society.”

“Thousands of working families have suffered huge economic losses just because of the census issue and there is a whole plan to try to create a new coup situation,” he said.

“We believe, as we have said unanimously in ALBA, that President Lucho Arce has handled this whole situation with great intelligence, great wisdom, and allowed peace, stability and peace to triumph for the Bolivian people Is.”, confirmed the Venezuelan dignitary.

In the ALBA Joint Declaration – he concluded – we “express our full support to President Lucho Arce for stability, peace and the full exercise of the sovereignty and democracy of the Bolivian people.”

Why is Marcus Rashford not in the England team? Man Utd star’s absence explained