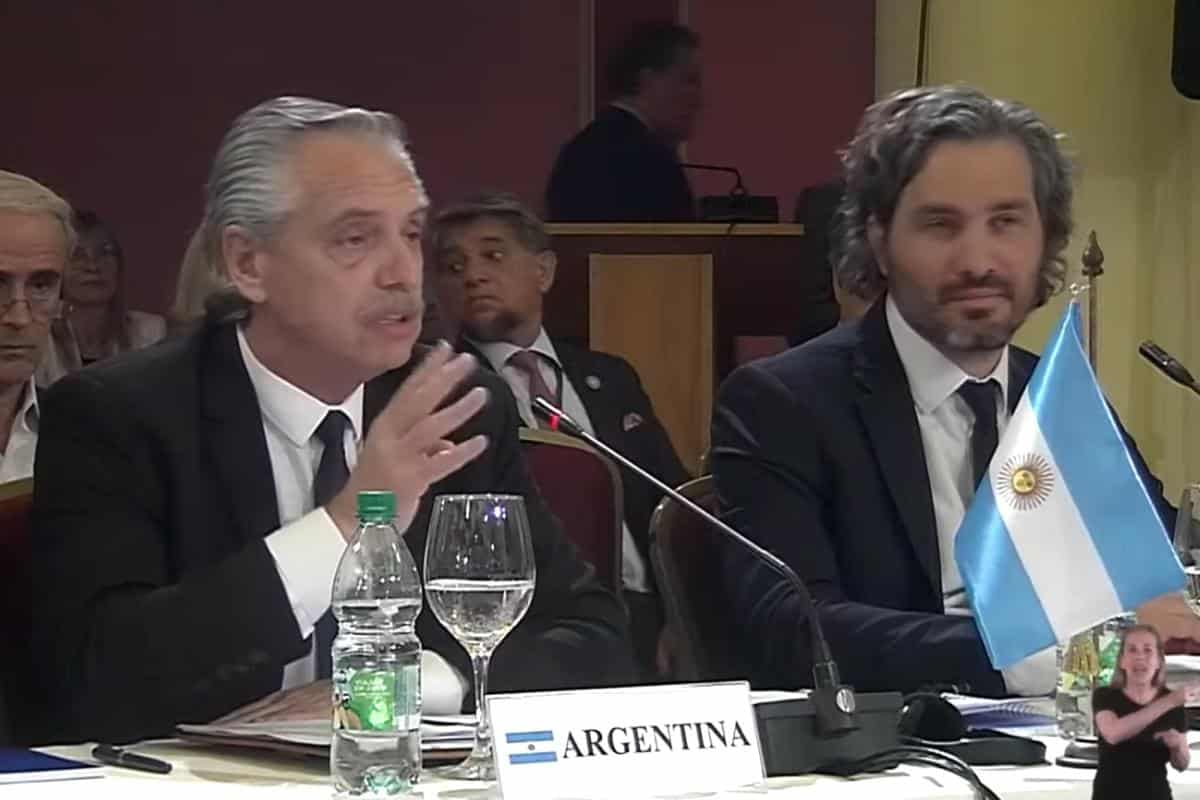 “Louis, you say nobody wants to break, but when someone isn’t following the rules, they’re breaking,” the president said with a smile. alberto fernandezwith the President of Uruguay louis lacle pou as the recipient. As expected, and at the plenary session of the Presidents of MERCOSUR In what has been done in Montevideo, the presidents of Argentina and Uruguay directly disagreed regarding the neighboring country’s negotiations to obtain agreements with countries outside the region without the consent of the bloc.

“The issue is how to unite efforts, Mercosur’s problem is the heterogeneity between its partners, but if the solution is for each one to do what they want, and every man for himself (…) China’s A pact together is complex, it’s hard to do individually. Why don’t we start thinking about how to join efforts to do it together?” Shortly after, Lacalle Po expressed his determination to move forward on this and other agreements, the president said, and then “invited” his regional partners to follow suit. ,

“Firing Squad”: who are the three judges who decide whether to sentence Christina Kirchner

“Uruguay needs to open up to the world and have a vocation, of course it’s much better if we go to the bar, and that’s what we’re looking for. But we’re not ready to sit still” , Lacalle Poe said, and defined Mercosur as “one of the most protectionist regions in the world”. Anticipating the President’s reaction, Lacalle Pou reiterated: “We are negotiating to start, but we are going to say, Argentina, Brazil, Paraguay, are we all going together? Same is the case with others. The point here is not to break, but to remove the tension, we have to look within ourselves., There have been two cuts to the Common External Tariff in recent months, and they were not unanimous. And that’s okay! We cannot be an obstacle to the progress of countries”, added Lacalle Po under the watchful eye of the President, who was accompanied by the Minister of Foreign Affairs santiago cafiero and ambassador to Uruguay, alberto ireburn,

In turn, Fernández insisted that Uruguay was “breaking the rules” and even floated the idea of ​​a common central bank, rejected by the President of Uruguay. “Why don’t we start thinking about joining efforts to do this together?” It’s not crazy to think of a normal central bank, eh, all we want is to promote our business. I don’t see everyone taking their impulse to see how their lives continue,” the president insisted.

The two presidents agreed on their critical approach to the delayed agreement with the European Union, although the president was more emphatic. While Lacalle Po affirmed that the counterparty was “complicating” the agreement with requests in environmental matters, Fernandez accused Europe of “lying” according to its vision, the real reason why the agreement between the blocs is not progressing. Is.

“If we look at the agreement that was signed, we can continue to blame the fact that we do not treat the Amazon well, but it is true that there are protectionist countries in Europe that Don’t want meat, our grains and our food.” to enter. Let’s ask Europe to stop lyingWe are concerned about taking care of the Amazon, but that is not the reason, is that you continue to subsidize and take care of agriculture and livestock production in that region”, the president sent, referring to France and Poland. Other countries that protect their agricultural production.

after the session, fernandez will take office as interim president today in Montevideo MERCOSUR by the hands of his Uruguayan counterpart louis lacle pouWhich was targeted by its partners in the bloc for its decision last week to move forward in a bilateral agreement with the Trans-Pacific Agreement, led by Australia and New Zealand.

Yesterday, the foreign ministers of the four member states clashed harshly over Uruguay’s decision at the MERCOSUR headquarters in the Uruguayan capital, and showed disunity over Uruguay’s “unilateral” actions in accord with Argentina, Brazil and Paraguay. Argentina too santiago cafiero Warned of a possible “breakup” of the regional bloc.

“From Uruguay, we already have an important vision: MERCOSUR had to rise to its times and challenges, and no one to dwell on byzantine discussions, We are still noticing the same shortcomings, said the Uruguayan foreign minister. francisco bustillowho presented last week on behalf of the President louis lacle pouProposal for an agreement with the Trans-Pacific Agreement, chaired by Australia and New Zealand.

“We are concerned about some one-sided approach, we have expressed this in the note,” recalled the foreign minister, referring to the letter of protest presented by Argentina, Brazil and Paraguay against Bustillo’s efforts in Oceania. “It is contrary to the rules of MERCOSUR, it violates the rule of unanimity, the basis of MERCOSUR. The one-sided nature of some decisions worries us”, said the foreign minister, who warned that this “unilateral path” “could lead to disengagement”, something the neighboring country rejects.

Chancellor regarding the delayed agreement with the European Union santiago cafiero warned about the “risks” of the deal, while Brazil made it clear in the voice of its foreign minister Carlos Franceto accelerate integration during the next presidency of luiz inacio lula da silvaWhich is starting from 1st January.

The personal and political relationship between Fernandez and Lacalle Po deteriorated during both presidencies. From that friendly barbecue at the Ancarena ranch near Colonia in November 2020, it moved into a harsher pattern in March 2021, when Uruguay’s president called Mercosur a “ballast” and Fernandez “invited” him to withdraw from the common bloc. , Meanwhile, frequent visits to the country by former President José “Pepe” Mujica, leader of the opposition Uruguayan Frente Amplio, led to Kirchnerism’s renewed sympathy for that area of ​​Uruguayan politics.

Uruguay’s decision to pursue bilateral agreements such as the Trans-Pacific Agreement and China exacerbated differences between Buenos Aires and Montevideo, in a MERCOSUR that awaited Lula’s inauguration to define a common strategy.

$60,000 reward being considered to solve murder of teen Thionee Theus