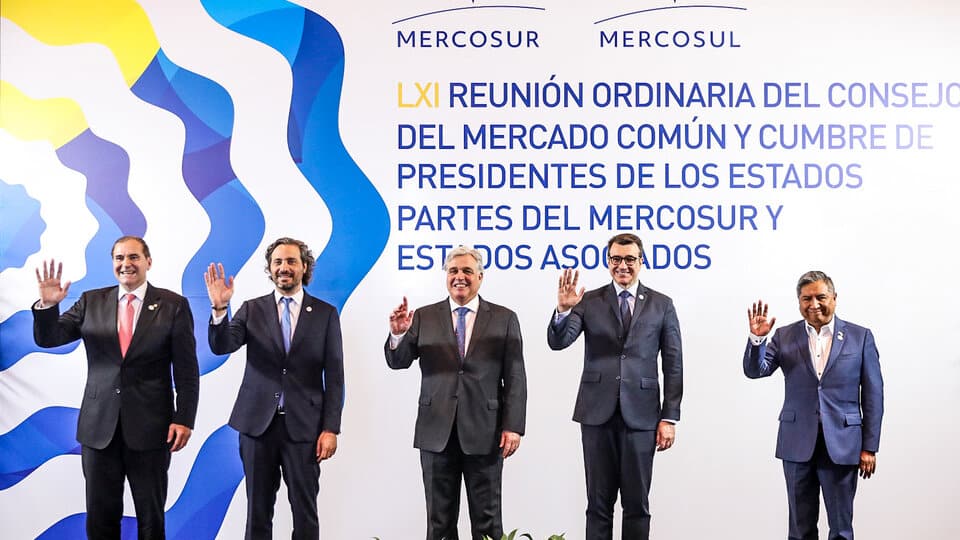 Alberto Fernandez will assume the provisional presidency of Mercosur today in Montevideo amid the bloc’s tensions with Uruguay, which is seeking to join the lone Trans-Pacific accord. The issue came up again in the foreign ministers’ meeting yesterday. The Uruguayan, Francisco Bustillo, once again criticized MERCOSUR as an “incomplete” and “languid” scenario. And Argentina, Santiago Cafiero, replied: “We do not aspire to a future convergence within the bloc, on the contrary, we observe with concern a path that appears to be one-sided and that is most likely going to to break”.

The President of Argentina would take office in that scenario. This will be the last summit attended by Jair Bolsonaro’s administration for Brazil, represented by his vice president. Paraguay’s president, Mario Abdo Benitez, and Uruguay’s Luis Lacalle Po, who is stepping down as interim president, will also attend. The bloc faces the challenge of reinvigorating the development of internal supply chains and hopes for a change in the balance of forces following the inauguration of Luis Inácio Lula da Silva on January 1.

Tensions with Uruguay mark tomorrow’s meeting and will mark the meeting of the presidents. “We are concerned about the problems that will inevitably arise from individual negotiations: legal and commercial problems,” said Brazil’s Foreign Minister Carlos França, along the same lines as Argentina. And the Paraguayan, Julio Arriola, spoke of the same position: unilateral positions “are insufficient,” he said, adding that “they undermine Mercosur’s image” and urged “respecting the founding texts.”

A little over a week ago, Lacalle Po announced the first formal steps to join the Comprehensive and Progressive Trans-Pacific Partnership agreement made up of eleven countries in Asia and the Americas and criticized the bloc that includes Brazil, Argentina and Paraguay . His chancellor defended that position yesterday. He questioned the “willingness” of Mercosur countries to “update” and “modernize” the bloc that was launched 31 years ago. “We do not have agreements with the main powers of the world,” Bustillo said, adding that Mercosur, since its formation, has achieved and maintained only eleven existing agreements and only four of those were with “extra-regional” actors. together for business.

The position is not shared by the block. The Asunción treaty prohibits unilateral agreements by MERCOSUR countries, it is in its DNA, and Uruguay has threatened not to comply. On the other hand, he says to the rest of the bloc that Mercosur broke internal and external trade records during these nine months of 2021 and 2022. Build”, they maintain in the chancellery. During the last summit, Uruguay had already expressed its intention to sign a free trade agreement with China, although its administration acknowledges that China and the Trans-Pacific countries Bilateral talks with the U.S. could take years to materialize. In any case, Uruguay’s position drew criticism from partners then and now.

“Undoubtedly, negotiating as a bloc is more work and requires more time, but we are convinced that the best strategy is not to rush to conclude agreements, which, subsequently, with other states or blocs will allow our productive and deepens the scientific-technological gap.” Said the Argentine foreign minister “some unilateral approaches are worrying,” Cafiero continued, “oriented toward bilateral dialogue with third countries outside the bloc’s consensus.” “We have expressed this through a note with the national coordinators of Brazil and Paraguay, we believe that it is contrary to MERCOSUR rules, not only, or not only, because it violates Article 1 of the Treaty of Asuncion to build is incompatible with a customs union but, above all, because it violates the rule of consensus, a fundamental principle of MERCOSUR”.

Cafiero commented on the bloc’s progress with Indonesia, saying the “logical” step for the bloc was to move forward with the Caribbean. He also pointed to negotiations with the European Union from where new demands arise. “Sometimes the ball,” he said, “just isn’t on our side.” “The EU continues to move forward with the approval of the Green Deal and at each stage, far from softening the scope of the regulations, it makes them more burdensome in the interests of countries that export agricultural commodities,” he explained. “Many exportable products will become more difficult and some will even be forced out of the European market”, he cited as an example. “In a world that is in retreat, plagued by the challenges of inequality, hunger, war, climate change,” he said, “moving together” is imperative and added “unilateralism” to his list of global ills. Of.

Brazil revealed itself along the same lines. A diplomat from Jair Bolsonaro’s government said, “Brazil is open to discussing flexible modalities in our external negotiations of the bloc, provided they are done in a clear and transparent manner and at the bloc’s precedents.” “We believe that balanced trade will be critical to the growth of income and well-being of our people. We have a true free trade area in South America. This is an achievement that should not be underestimated,” he said. Seemed like a direct response to Uruguay.

Paraguay took the same position with respect to Uruguay as the rest of the bloc’s partners. Foreign Minister Arriola said without losing the calm tone of diplomacy, “Alone we may move fast, but together we will move.” Regarding the global situation, marked by the effects of the Covid-19 pandemic and the war in Ukraine, Ariola prepared a scenario to “take advantage of the stability of the Mercosur bloc as an area of ​​peace” and “deploy” . Green agenda area”. And he pointed out that MERCOSUR countries “have a lot to offer to the world as food producers in terms of food security and sustainable production.”

Bolsonaro’s foreign minister bids farewell to his Mercosur comrades at Soccer Chicana. At the end of his speech at yesterday morning’s meeting, the head of Itamarati thanked those present and said that “being foreign minister of a complex country” was the biggest challenge of his career. He said, “My contact with you was very learning. You can always listen, you can learn together.”

However, at the end of his speech, he pointed directly to Argentina’s Foreign Minister Santiago Cafiero, who will take his place in the regional block from today: “I want to wish you good luck at work. I found out that whatever Lucky they have bad luck in football. I want to wish them much success”, said Franca and smiled at everyone in attendance, referring to a possible cross between Argentina and Brazil in the semi-finals of the World Cup in Qatar. And clapped.