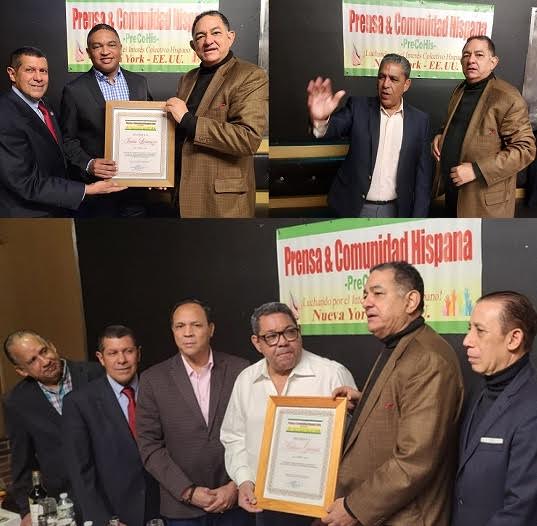 Lorenzo, who came from the DR invited by “Prensa and Comunidad Hispana” (Precohis) and asked to participate and be recognized during the Christmas gathering held last weekend in upper Manhattan, said that he presented an initiative that repeals the obsolete law 716. wants to modify. 1944 on the public ceremony of the Dominican consulates , https://docs.republica-dominicana.justia.com/nacionales/leyes/ley-716.pdf

“I want to call on the Dominican community abroad to be vigilant and, in any scenario and whatever it may be, to fight this” privatization, Lorenzo said in front of dozens of distinguished guests (elected officials, businessmen, politicians, professionals, journalists). Endeavor”, and the community), present at the event.

“If we allow the government to do this, consular services will become more expensive, besides, we will open up the space so that it can later also“ rely ”on national symbols.”

“It is a claim, the only thing we can offer the diaspora, which sacrifices so much for the Dominican people, is to revise this law, because it is not possible that in the middle of the 21st century a Dominican Guna is paying what is the value of a service in New York in DR to enrich political workers,” he said.

He recalled that on one occasion Milagros Ortiz Bosch said that the government was not going to become plunder for the Permeista leaders, “however, we have said repeatedly that we approve of this law, that we will remove that plunder.” Give what Dominican politicians have.”

“We are talking about how a consul can add more than a million dollars to his monthly account at the cost of the sacrifices of the Dominican people,” the senator said.

Congressman Adriano Espilette, who was late to the activity due to commitments related to his duties, exchanged views on community issues over the phone with Senator Lorenzo, who is also the State of New Jersey to meet community and family commitments. Had left for

In addition to Lorenzo, PreCoHis also recognized the well-known and prominent sports writer of DR, Héctor García, for his 53 years in communication and that with his sports perspective, comments and analysis he reaches Dominicans abroad, because Sports is one of the things that we give most follow-ups here and there.

In giving thanks, García expressed the importance he attaches to the Dominican community: “I had the honor of representing the newspaper El Nacional in New York in 1984-85, I know the struggle, the Dominican life, the value of this extraordinary community, it Must be the best of all of us who have come to serve and seek this American dream.

“I have great faith in this community, I do not take for granted the little things involving the Dominican people, because we have enormous values, we have contributed and will continue to contribute to the development of this great nation,” he said.

On his part, Assemblyman from The Bronx, Jorge Alvarez, recognized Garcia, saying: “It is an honor for us to be here to see this type of recognition that goes to people who have truly contributed to our community.” Have given.” ,

The event was held at Restaurant 809 (La Casa Dominicana) located in Upper Manhattan, with a buffet, whiskey, wine, beer and soft drinks.

Big Pharma’s ethical dilemma: should they keep selling to Russia?

When the Real ID is activated, the passport also cheats