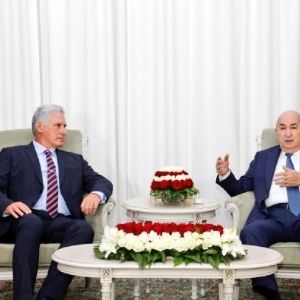 Algerian President, Amdjid Tebboune, on Thursday confirmed to his Cuban counterpart, Miguel Díaz-Canel Bermudez, the decision to cancel bilateral debt services payments and then to postpone their repayment to another time.

Tebboune expressed himself in these words in connection with an official visit by the Cuban president to the North African nation, as part of a tour that will also take him to Turkey, Russia and China.

According to the Algerian president, his country “feels in duty to commit itself to Cuba, a friendly nation with which we share past and present ties.”

,@DiazCanelB: our presence #Algeria This is an indication of the importance we attach to bilateral relations, and also reaffirms our desire to continue the brotherhood forged by the historical leaders of the two countries.#CubaArgelia pic.twitter.com/0d8ku0xn7r


The Algerian President also reported on agreements related to the supply of fuel to Cuba and the offer of a solar power plant for the generation of electricity.

They also talked about cooperation in the production of medicines and vaccines between the two countries, which have a close relationship in the field of public health.

Regarding the announcements made by the Algerian President, the Cuban President acknowledged that “they are important areas in which we are going to work together and show mutual benefit,” pointing out that “they mean a lot to our country”. important support.”

Cuba and Algeria have maintained close ties for six decades, when the nascent Cuban Revolution offered support to Algerian fighters in the midst of a war of independence against France.