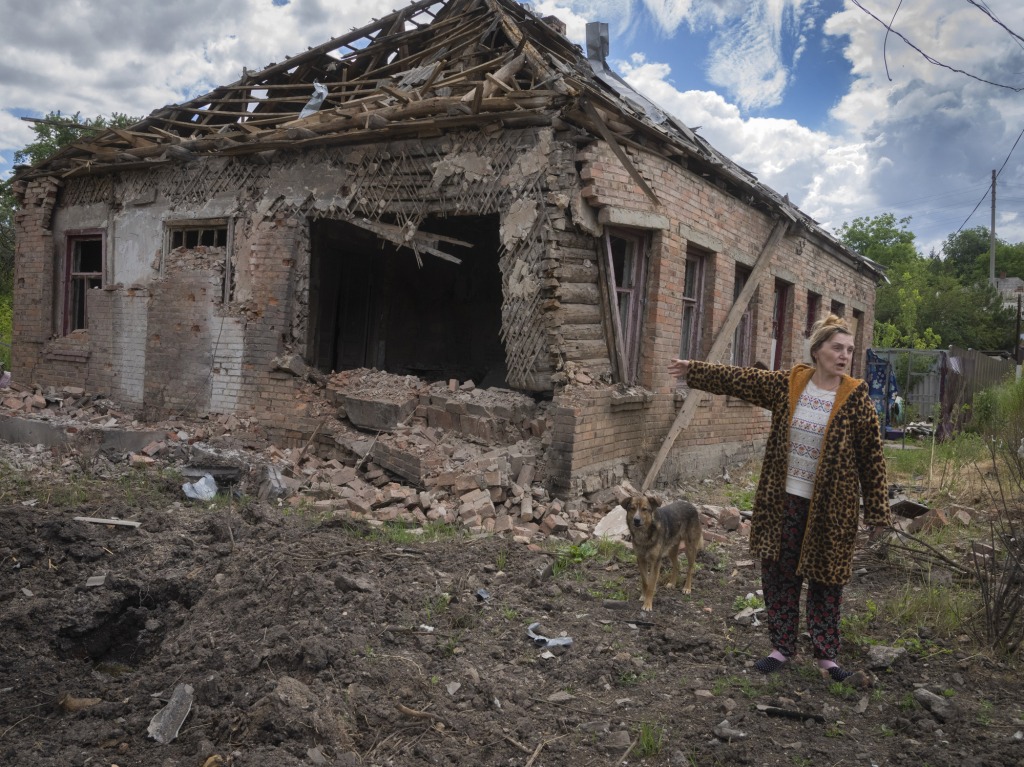 Kyiv, Ukraine. The European Union’s decision to make Ukraine an EU candidate gave war-weary Ukrainians morale and hope for a safer future on Friday, when the country’s militaries ordered their fighters to retreat from a key eastern Donbass city. .

Ukrainian President Volodymyr Zelensky hailed the EU leaders’ decision as confirmation of his country’s four-month struggle against Russian aggression and said he was determined to keep Ukraine free to decide whether it belongs to Europe or is under Moscow’s influence.

“This war began just when Ukraine declared its right to freedom. To choose your future. We have seen this in the European Union,” Zelenskiy said in a televised address to the nation late on Thursday. “That’s why this EU decision is so important, motivates us and shows that we are not the only ones who need all this.”

Others recalled the 2014 revolution that toppled Ukraine’s pro-Moscow president, prompted in part by his decision not to pursue an association agreement with the EU. Russian President Vladimir Putin opposed the deal, just as he demanded that NATO never accept Ukraine as a member of the alliance before sending troops into Ukraine on February 24.

Arseniy Yatsenyuk, an opposition leader who became prime minister after the revolution, expressed joy at the candidate country’s status but also “bitterness” at the “terrible price Ukraine pays for wanting to be a free, independent European state.”

“Thank you to our soldiers – they won this decision,” Yatsenyuk wrote. “Ukraine is a great country that will inevitably become a member of the EU and just as inevitably a member of NATO.” Ukraine applied for membership less than a week after Russia’s invasion of the country and must go through a complicated months-long process to be eligible to join the bloc of 27 countries.

The EU has also granted candidate status to the small country of Moldova, another former Soviet republic that borders Ukraine and also has territory controlled by pro-Russian separatists.

Russian Foreign Minister Sergei Lavrov said the European Union and its potential enlargement poses “no threat or risk” to Russia because the bloc is not a military alliance like NATO. But he said the Kremlin believes the EU’s stance and outlook have become more anti-Russian.

“We are well aware that the EU has evolved over the past few years, acquiring an aggressive ideological background, primarily a Russophobic one,” Lavrov said.

In Pokrovsk, a small town near the front lines of a four-month war in eastern Ukraine, few residents wanted to discuss the EU candidacy as they rushed to collect their daily aid. Some of those who shared their thoughts said the decision would send a strong signal to Russians trying to take over towns and villages a few miles away.

“Next stop is NATO. Now there is no way back. I was born in the times of the USSR, but there is no return (to this),” said Valery Terentyev, a resident of Pokrovsk. “Ukraine wanted something else, and, in my opinion, this is right.”

The Chairman of the Verkhovna Rada of Ukraine said that the path to EU membership would remind the country’s soldiers that their struggle, which has received international recognition, is worth the trouble.

“This is a powerful political message. Soldiers in the trenches will hear it, every family forced to flee the war abroad, everyone who helps bring our victory closer. But it will also be heard in the bunker,” said Ruslan Stefanchuk.

Encouragement aside, the reality remains that the European Union sometimes talks a lot about solidarity and support, but lacks concerted action to deter external threats, even though the treaty obliges EU countries to help another member. faced with armed aggression.

To gain EU membership, countries must fulfill a variety of economic and political conditions, including adherence to the rule of law and other democratic principles. The EU executive has indicated that Ukraine will also have to curb entrenched corruption and implement other government reforms.

Belgian Prime Minister Alexandre de Croo said the EU’s embrace of Ukraine was “an important symbolic signal, but it is the beginning of a beginning.”

Some Ukrainians realized that their country still had a long way to go to meet the tough criteria for membership.

“We still need to grow,” says another Pokrovsk resident, Yevgeny Zaitsev. “There is a lot of corruption. There are a lot of lies.”

While the EU has accelerated its consideration of Ukraine’s membership application, the ongoing war could complicate the country’s ability to meet the entry criteria. Russian forces have slowly advanced in recent weeks in their offensive to capture the Donbas region, where pro-Russian separatists have controlled much of the territory for eight years.

Ukrainian forces were ordered to retreat from the besieged city of Severodonetsk, one of the last Ukrainian-held areas of the Luhansk region, to avoid complete encirclement.

The city faced relentless Russian bombing, while Ukrainian troops fought the Russians in home battles before retreating to a huge chemical plant on the outskirts of the city.

The governor of the Lugansk region, Serhiy Gaidai, said the retreat was ordered to prevent encirclement by Russian forces, which have carried out the capture of Severodonetsk and neighboring Lysichansk in recent days.

There are fears that Europe is closest to a war in decades. What caused the Russia-Ukraine crisis?