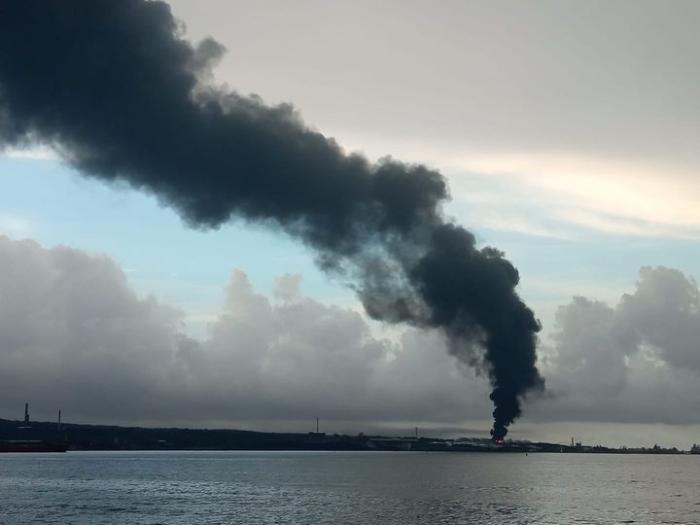 Matanzas.- A fire broke out this Friday from the impact of a lightning discharge in one of the fuel tanks located at the supertanker base on the outskirts of the city.

The reservoir held approximately 25,000 cubic meters of domestic crude oil, about 50 percent of its maximum capacity, when lightning struck the facility’s dome, known as the geodesic dome roof.

explained Rigel Rodriguez, regional division director of Matanzas Fuel Marketer, who immediately took over the task of extinguishing the fire and preventing the flames from reaching other similar containers located in the area.

Originally using water and foam, special media and forces from the Ministry of the Interior and the Revolutionary Armed Forces joined forces to control and suffocate the fire, causing a large column of smoke to erupt from somewhere in the small town. was also visible. ,

Evert Eduardo Díaz, director of the same unit, said it was also necessary to move water from a nearby bay to quell the pace of the fire.

Top officials of the party and the region’s government were present at the accident site.

Although the cause of the incident is yet to be evaluated, it appears that there was a malfunction in the lightning rod system that could not withstand the energy of the electrical discharge.

Misbel Palmero Aguirre, general director of the António Guitaras Thermoelectric Power Plant, clarified that the said unit remains in service and that the burnt tank has nothing to do with pumping fuel into the plant.

Fire caused by an electrical discharge at the base of a super tanker #Massacre, Officers, Fire Department, MININT, FAR are at the spot. believe the situation will be under control #ForceMatanzas #cuba #Massacre @DiazCanelB @DrRobertoMOjeda pic.twitter.com/OCxqMxtIlx