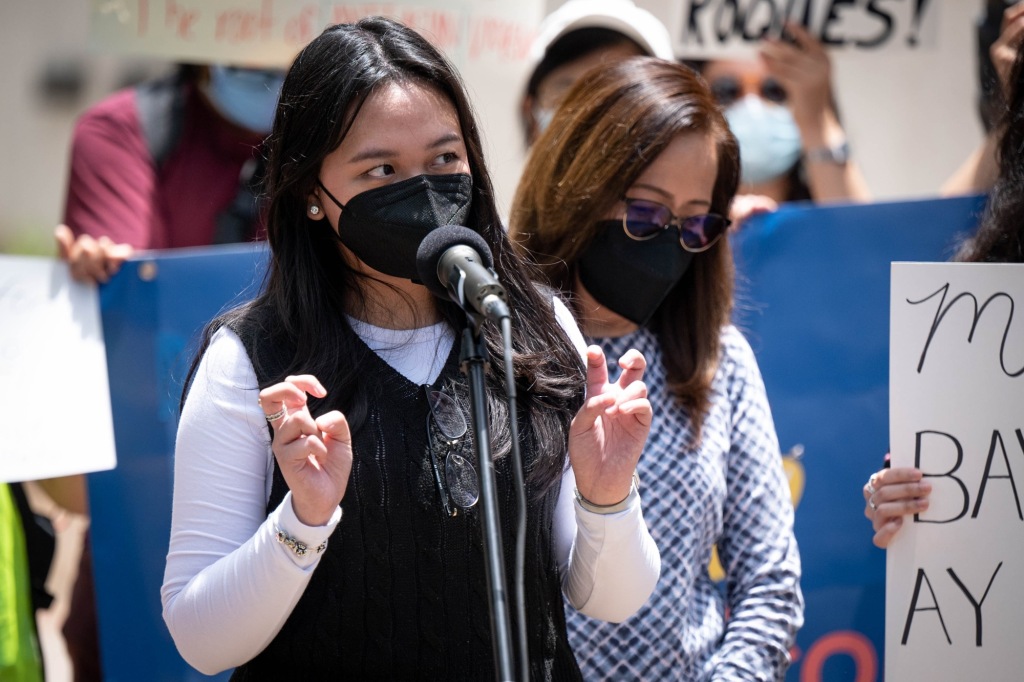 Dozens of activists gathered on Friday, June 17, standing next to members of a Filipino-American family who were victims of an anti-Asian attack in May when a man in a jeep ran into their vehicle while waiting in a McDonald’s passage in North Hollywood.

The Roque family was surrounded by activists gathered in front of the Van Nice courthouse demanding justice for the suspect Nicholas Weber, who is accused of attacking a family father and mother who, along with their daughter, ate french fries at McDonald’s on Victory Boulevard, 13. May.

“We are here to hold the government accountable for their lack of response and to demand that District Attorney George Gascon prosecute Nicholas Weber to the fullest extent of the law,” said Katie Joaquin, chairwoman of the Philippine Migrants Center.

The victims state that the father suffered a broken rib, and the mother was strangled, but she survived. A video of their daughter shows a man verbally attacking the family with racist language and movements, mocking their Asian background.

On June 5, the district attorney’s office indicted Weber for hate-motivated violence, including a felony related to “grievous bodily harm.” An arrest warrant was issued for Weber after he did not appear at the court hearing on June 8.

Patricia Roque, a daughter, said they were “still scared for our lives” and learned that the alleged attacker lived near them in North Hollywood. Family and neighbors are worried that he will continue to attack them.

The activists who gathered on Friday belong to groups active in the Philippine community, including those fighting for workers’ rights. They shouted “Justice for the Roque family” and called on the authorities to do more to investigate and prosecute the hate crime case.

Some were concerned that the case had not been fully investigated by Los Angeles police.

Joaquin, from the Philippine Center for Migrants, said that the members of the Roque family have taken over for their community, and that now it is the turn of the community to take care of the family.

She said that she first met her mother, Nerisa Roke, when she struggled to “return back wages (for health workers) from a large millionaire employer”.

Nerisa’s son, Patrick, is an activist who “fights for the rights and well-being of migrant workers,” Joaquin said.

Other groups that gathered behind the family included the National Alliance for Philippine Care (NAFCON), Migrante Los Angeles, the Kabataan Alliance, the Bajanihan Collective and Anakbayan.

Patricia Rock told the Los Angeles Daily News that she was disappointed with the response of law enforcement agencies to the attack on her parents. She said police arrived an hour after the incident was reported. She stated that Weber was taken to the hospital, released and issued a citation. She says police officers told her family that Weber should have been taken to the LAPD station.

She is now worried that Weber could target her family and others, after he did not appear at the hearing.

“It is really unfortunate that such cases of Asian hatred are not really a priority, unless the media and the community and lawyers are involved,” Roxas said.

The incident followed a series of hate incidents against Asians nationally and in Orange County. Locally, in 2020, a Filipino-American woman was the victim of verbal abuse by a woman who filmed her screaming racial epithets.

Patricia Rock, who described herself as introverted, said she chose to speak more because people in her community and other communities prone to hate attacks should not face such a reality.

At one point, she cried as she listened to the performer recite a song about attacks on Asian women. She was calm during the media interviews about the attack on McDonald’s, she said, but at that moment she said: “It struck me that the Philippine community … the Asian community and other vulnerable communities have been dealing with these years.

“It struck me that this has been going on for so long, and we just stood by and watched it happen, and it’s sad,” she said.