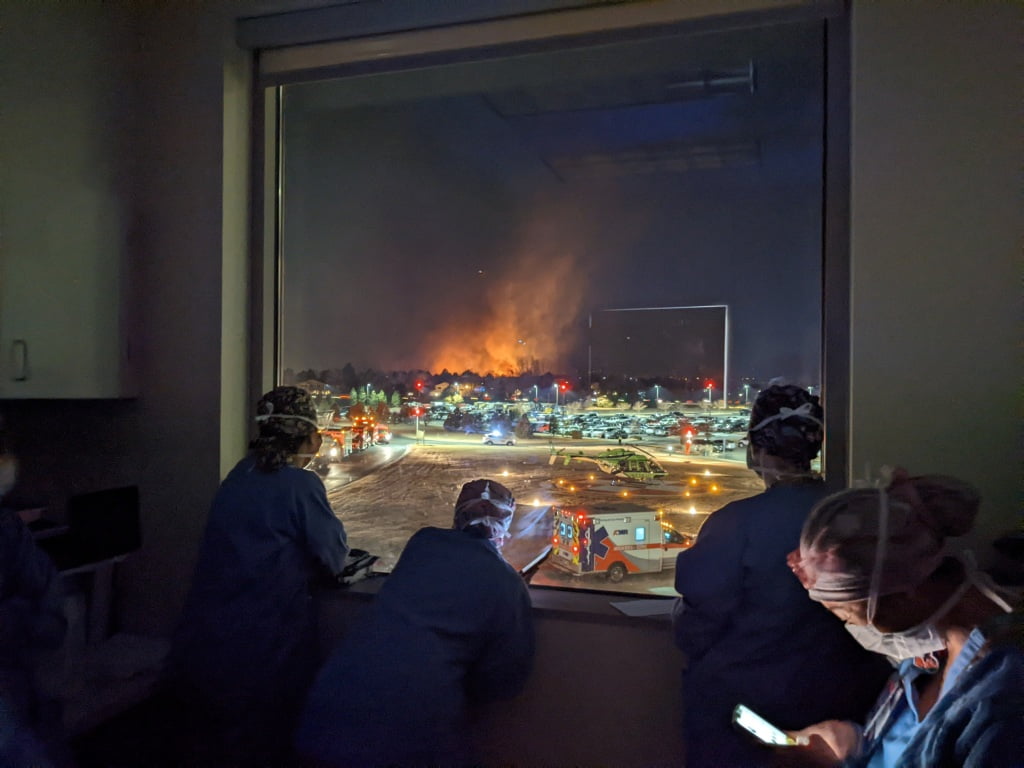 Medical staff – and a patient – were walking hand in hand, each carrying a baby from the neonatal intensive care unit, down the stairs and out toward the waiting ambulance.

They were evacuating Centura-Avista Adventist Hospital in Louisville on December 30 as winds blew Marshall’s fire toward the hospital. The group decided to take the stairs out of the hospital, considering the elevator ride too risky.

NICU nurse Alison Brown takes a picture of herself and her baby while boarding an ambulance on the way to St Anthony North Hospital in Westminster.

“It was really meant as a timestamp, like anything but, ‘This is me and this is who I’m with and we’ve made it this far,'” Brown said. my life.”

In a span of about three hours, the hospital evacuated 51 patients that day – 21 went home and another two at Centura hospitals: 25 St. Anthony North and five Longmont United – as well as 100 staff members, according to a hospital spokesperson. The flames came within feet of the liquid oxygen tank on the hospital’s west side, but the hospital eventually stood. Still, extensive smoke damage has put it off indefinitely as crews work to decontaminate and clean up the consequences.

The hospital’s CEO, Isaac Sandros, was on his way to the mountains with his family and had gone to the Netherlands when he heard that Avista was on fire, so he turned quickly. Strong winds were of particular concern.

Sandros, who worked in Florida, had a habit of preparing hospitals for hurricanes, but in those situations, you have a lot more time to plan. When he arrived in Avista that afternoon, he went straight to the emergency room department and saw a queue of patients getting ready to be transported.

Everything was moving fast. Patients were being transferred per protocol, but on a much larger scale. The COVID patients on ventilators were to be looked after by people who were wearing the right protective equipment. One mother was in mid-delivery.

By the time Sandros himself left, he said the neighborhood was in flames, the fire had jumped across the street and engulfed fields near the front parking lot, with smoldering trees.

“The team was calm and the team focused, and the team, to some degree, knew what was happening around them, but they understood that their priority was to get these patients out,” Sandros said of the evacuation. He said he saw “selfless acts of courage” that day.

Hospital staff members who lived nearby, including Brown, did not know if they would return to their homes and find they had been destroyed by the fire or if all their family members, friends and pets were safe. But he had to put a lot of it aside as he got his patients out of harm’s way. They bundled the babies with warm hats and blankets, stored frozen breast milk in coolers, and grabbed the babies and equipment and began their journey.

Some of the kids who were on CPAP (continuous positive airway pressure) came off the machines that morning, so “we were really lucky to have a strong and stable bunch at the time,” Brown said. And some parents were able to pick up their kids and carry them, but Brown said pulling out those scared parents was one of the most heartbreaking things she’d ever done.

“I think everyone can remember that first car ride home … with your new baby. And then to think that we’re putting these kids in the car in the meantime — it was like it was the apocalypse outside.” , with just the wind and smoke and the bits of fire and ashes that you could see flowing – and we’re putting these moms and dads in the car and hugging them and just telling them, ‘You do this You can, you’ll get home safely and you can do it,’ and that’s just not the way we want to say goodbye,” Brown said.

For Sunni Pantin, a patient access representative, her workday began quite normally—she was training a new staff member and checking in on people in the emergency room department in the morning. But it didn’t take long for the day to change. Soon, nurses were coming down with the kids through the ER and she was trying to help the patients out quickly before they were sent to the hospital in Longmont to provide assistance. She said her job felt almost like that of an air traffic controller.

“I reacted by thinking versus during it,” Pantin said. “I jumped in, we were throwing blankets over the patients to go outside for coverage because some of them didn’t have jackets, and even more so to keep the smoke from getting into their lungs.”

When she was finally able to let herself go, Pantin said the smoke was gushing. She could see the flames all around her, and at one point at a stoplight, she saw the lights go out all around her. “It was an Armageddon-y experience,” she said.

It’s not something Pantin or many of his colleagues ever considered doing, but like others, he appreciated how efficiently and quickly the employees worked as a team to get people out safely.

Mark Dougherty, head of North Metro EMS, who helped manage the evacuation of patients without waiting for additional resources due to the rapidly growing fire, said the biggest challenge was finding available beds for patients, especially emergency responders. Tried to coordinate other evacuations.

“Health care workers, first responders, firefighters, paramedics, everyone has been so stressful over the years and in some ways has been at breaking point and staffing has become difficult and overtime has become overwhelming,” Dougherty said. But the respondents were professional, skilled and resourceful, and they were proud to work with them, he said.

a nearby hospital evacuation

Earlier that afternoon, staff at Good Samaritan Medical Center in Lafayette were preparing to accept Evista patients six miles away when they learned that a rapidly growing fire had forced its evacuation.

Brian Fleming, director of systems emergency management at SCL Health, owner of Good Samaritan, said, “As we began to prepare for their ability to receive patients, we quickly realized that we were not self-evident.”

The campus where the hospital sits has only one good escape route—west to US 287. That north-south road acts as a barrier, but if it is breached, any evacuation will prove difficult. Acres of dried up fields engulfed the area, which along the way provided a path for fires in Boulder County’s more densely populated suburbs.

The hospital discharged patients who were ready to go and sent visitors home. The emergency room was closed and labor and delivery services stopped. The hospital called on ambulance staff for help when an evacuation was needed.

“We got tremendous support from EMS agencies who supported us. We had countless ambulances staged in the area,” Fleming said.

If closed roads make transportation difficult or if the power supply fails, the most vulnerable patients are given priority and shifted as a precaution. About 55 critical patients were transferred to Lutheran Medical Center, St. Joseph’s Hospital and Platt Valley Medical Center, SCL sister facilities.

Wendy Cardona, an operating room registered nurse, had only been working at the hospital for five weeks before the fire broke out. She was already at work when she received a message from her fiancé about a fire near Boulder. He had felt the strong winds that morning and started worrying, but he continued with his day. A few hours later, while she was preparing an operating room, the surgery was stopped.

They were in a holding pattern. That’s when he took a picture that has since garnered a lot of attention on social media about a fire that broke out from a west-facing hospital window in a dark X-ray room.

In the photo, other nurses look out the window where ambulances are carrying patients, a fire raging in the distance behind them. Another nurse, masked, is looking at her phone intently.

“The lights and fire from outside were very strong, and … it was a fascinating sight,” she said.

At around 8:30, after the temperature cooled down, everyone started breathing easier and by midnight another emergency response team took charge. The hospital did not need to evacuate the remaining 100 patients still in its care.

Data Shows U.S. Allies Are Contributing Much to the Decline of Global Democracy