Apple is the only major technology company that has dodged the wave of layoffs. it’s been their secret 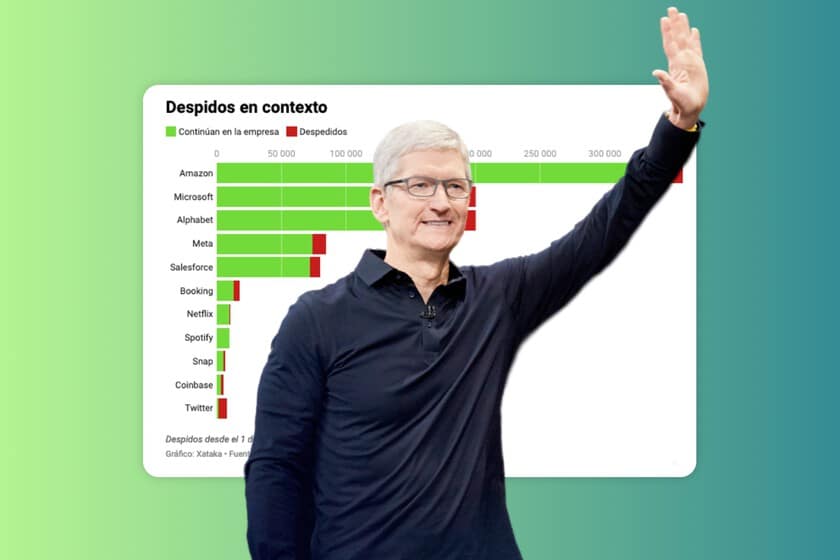 October 2021. this was the moment The party’s over for tech companies, After a short-lived scare at the start of the pandemic, the lockdown era skyrocketed stock market valuations of tech giants and the venture capital party added to the excitement.

Few imagined then, on Halloween night, how the next months would continue. Stocks, a common early indicator, began to fall. Most are still far from their all-time highs, venture capital has frozen and the parade of layoffs that began a few months ago is continuing into early 2023 for nearly all of the tech giants that haven’t yet joined them.

The pandemic was economically toxic candy for tech companies. Contributed to the skyrocketing demand:

We should also add the rise of cryptocurrencies from late 2020 to late 2021, when a large increase in value gave way to a decline that has only partially recovered in recent weeks.

Both anticipated demand and triggered demand were the result of the pandemic which paved the way for a drastic return to normalcy.

After all this, a gradual return to normalcy that acknowledged a reality: high demand for these products and services during the pandemic This was not permanent, although some companies entered into contracts as if they were., They exaggerated the effects of the pandemic, treating what was old as a perennial.

There was both an anticipated demand (those who refurbished TVs earlier than planned or took the opportunity to replace their laptops) and a triggered demand (eg more subscriptions to video-on-demand services) which later caused deflation. Made.

While Microsoft and Alphabet grew their workforces by more than 50%, and Meta by more than 90%; Apple was less ambitious, or more realistic, and stopped the counter at a 20% increase.

In January 2023, Apple has not announced layoffs, Microsoft and Alphabet are going to lay off 5% and 6% of their employees; And Meta boosts the dismissals ratio to 13%. The figures are largely in line with workforce expansion during the pandemic.

One nuance: Amazon factors in layoffs to its corporate workforceExcept for warehouse workers, that adds up to a million more employees.

It’s also worth noting a special case of Twitter. Elon Musk took control of the company in late 2022 and soon began laying off employees.

according to internal documentation to which he has access cnbc, Now only 18% of the employees who existed before his arrival are left. From about 7,500 employees, they are down to only 1,300. And only 550 of them are full time engineers. Musk assures that the actual figure rises to 2,300 employees, although definitions are sometimes quite vague by interested party.

There have also been layoffs in the national subsidiaries of these companies in Spain., Meta is laying off 18% of its Spanish workforce and Twitter was operating without all of its local staff, although it is now a paralyzed process. In the case of Microsoft and Alphabet, it remains to be seen who appears on the lists and how much the teams in Spain are eroded.

An eloquent graph is one that shows the magnitude of the layoffs, but also the workforce at each of these companies, and what the number of layoffs represents proportionally. Adding to this list is Spotify announcing the last 600 layoffs, 6% of its workforce.

To put the size of Apple’s workforce into perspective, it would fall somewhere between Alphabet and Meta: it’s 164,000 employees And it didn’t lead to mass layoffs for 25 years, when Steve Jobs returned to the company after eleven years away. At the time, he found 11,000 employees on the payroll, of whom he fired 4,100. There have been no mass layoffs at the Cupertino company since then.

This comparative success is by far not forever, and in fact wall street journal They point to the upcoming presentation of quarterly results complicated by the announcement of billing data for the final months of 2022.

Supply fell against demand due to restrictions in the Chinese production line, although a return to normalcy after the end of China’s aggressive anti-COVID policy could restore order in the balance sheet for the first quarter of the year.

for now, Apple survives while others fix miscalculations due to excessive hiring, And one more detail: a few days ago, the Apple shareholders’ council decided to cut Tim Cook’s salary by 40% (though not the salaries of the rest of the executives).

Paradoxically, in a pandemic everything seemed more stable.

Vikings 2022 Off Season Preview: Where Does Minnesota Stand in the OL?