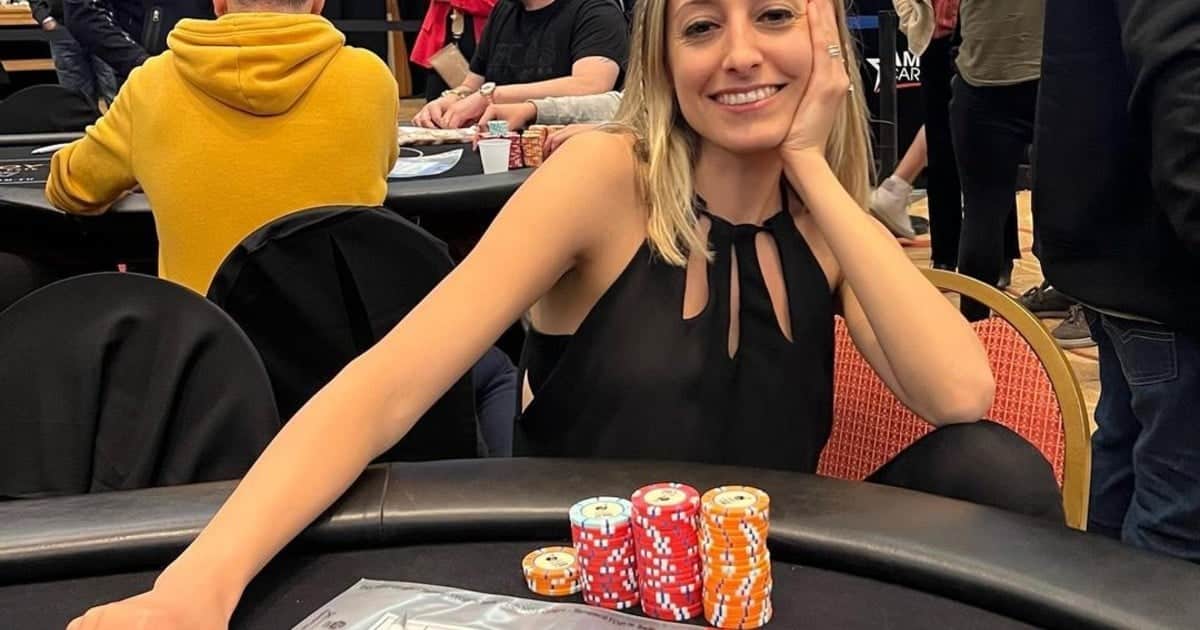 She is happy pamela balzano With his debut at the World Cup of Poker to be held in Punta del Este until 10 December. In her first game, the 26-year-old Argentinian finished 13th out of 104 participants and was able to “get paid”, circumstances that inspire.

know it photographer, content creator and, more recently, professional poker player, quite a rare bird Within a discipline historically directed by men. “We are very few, but slowly women are making a place for themselves and there are women’s tournaments,” she says.

Influenced by his older brother, Ivan, a gaming professional, Balzano first approached poker as a photographer, “with the aim of showing behind the scenes, An atmosphere that is invisible and has nothing to do with poker’s bad reputation, In what he painted, he tried to remove those sordid and gloomy atmospheres filled with smoke and whiskey bottles”, describes the influential man from Buenos Aires, who, thanks to his colorful and relaxed style, is gaining popularity among poker players. managed to get the world’s largest online sponsor to notice him.

“As if it were a university degree, you have to study poker and it can be a job opportunity,” he says.

“It’s a girl’s dream to get that accolade,” on the roof of the Enjoy Hotel in Punta del Este, where the tournament, with participants from around the world, takes place.

“I’ve been working in this universe since 2016, from the very bottom, and I was able to reach the most Gross who allowed me My social media posts got more exposure, which attracted the attention of GG Poker And it gave me an opportunity to create different content about the sport,” he explains.

Yup, Pamela called the game, and she justifies it. ,Requires discipline, training and concentration, It is believed that because it is associated with the casino, the place where it is usually played, it is a game of chance and has nothing to do with it. Poker is 80% skill and 20% luck.“, he vehemently defends. “There are players who go to the gym, do yoga or mental control before games, because sometimes games are marathons and the mental exhaustion is tremendous.”

Defending her position that poker is a sport, Pamela points to prominent Brazilian Andre Accari, “who 2016 Olympic torch bearer, in the Janeiro River. Do you understand what I’m going to do? It’s a fight I’m not ready to lose, so I guess I’m contributing Remove the aura of coercion, misconduct and bad living from poker, At that time, in Rio, the world saw how a poker player received one of the highest honors in the world of sport.”

A woman with goals to meet, Pamela gradually became an expert when it came to showing the universe that was so unknown to the common man. ,I just needed to go play and I was encouraged in 2018being part of smaller tournaments”. Until he reached the elixir: “In July I played my first World Cup in Las Vegas, where the world’s most important poker event is held, and I Ranked 36th Out Of 1,000 Women, Earned My First Strong Financial Income of my life of about four thousand dollars”.

Pamela considers herself a “novel player, with a lot ahead of her”, but without arrogance she feels like “the most relevant poker personality in Argentina”. Why? “That’s why from my place i try Give poker the dignified and honest image it deserves. On the other hand, as a player, it gave me the management of patience and persistence. I would say that’s my biggest strength when it comes to playing… I don’t rush, I’ve learned to wait for the right time.”

Pamela Balzano reflects, “It will be important for tournaments to punish men who underestimate women, creating a hostile environment.”

,Poker can be a job opportunity if you stick to it. But you have to study deeply, four or five years, as if it were a university degree. Today you can not only practice online but for a small amount of money you can participate in tournaments through the internet and win money. But you have to take it seriously”, something that sometimes doesn’t happen with women. “It will be important that the tournament is sanctioned men who put women down, harass them, or behave macholy“He became

“As it was always a male activity, the presence of the female could make him uncomfortable, unstructured, but he Not able to generate hostile environment Slipping comments like ‘But you, beautiful’, ‘You came with lipstick, it seems’, Or the one who asks you if you asked your boyfriend’s permission to play. I’m leaning in, but I know there’s a stigma against women… There’s no shortage of people picking you up or people looking at how you’re dressed. It works against women when it comes to cheering up.”

But Pamela says she is encouraged to continue urging her social networks to “produce content to inform in the face of so much misinformation. Because There’s a lot of fiction around poker, that whenever it appears in movies it’s among gangsters And it’s not like that, and it’s not that bad poker face, what does this mean? There is no such thing as a poker face, it’s more a myth of movies than real life. during the game You have to be an idol, don’t show any emotion to avoid being readable And no matter how hard it is, losing track of money is essential, because for better or for worse it eludes you.”

Pamela, who needs to be “barely” rested and well-fed to withstand extensive matches that take ten hours, highlights another quality of her favorite sport. “One of the things that most learn to cope with frustration, he is omnipresent In sport, I insist, it takes a lot of skill, insight and intelligence. But one card, just one, can undo the making of a great play.”

Desasna Balzano, one of the most complicated things to do Decide all the time about your steps to follow With incomplete information, because you don’t know what cards the other has, and it is also complicated to put yourself in the other’s place, analyze them, observe them, try to extract cards from them, which will help you mentally and mentally. It’s exhausting”.

Look back at the time that saw the Argentine national team take a break, but on this second day of the World Series of Poker, the most important game on Saturday night will resume its playful activity on Main Event Day, the iconic Punta del Set of poker tournaments in the world closing in on Est.

After a decade, Delta returned to London-Gatwick

They find 36 apps infected with malware and spyware on Android