As Virginia Students Get Slapped With Suspensions For Not Wearing Masks, Parents Direct Frustration at Governor 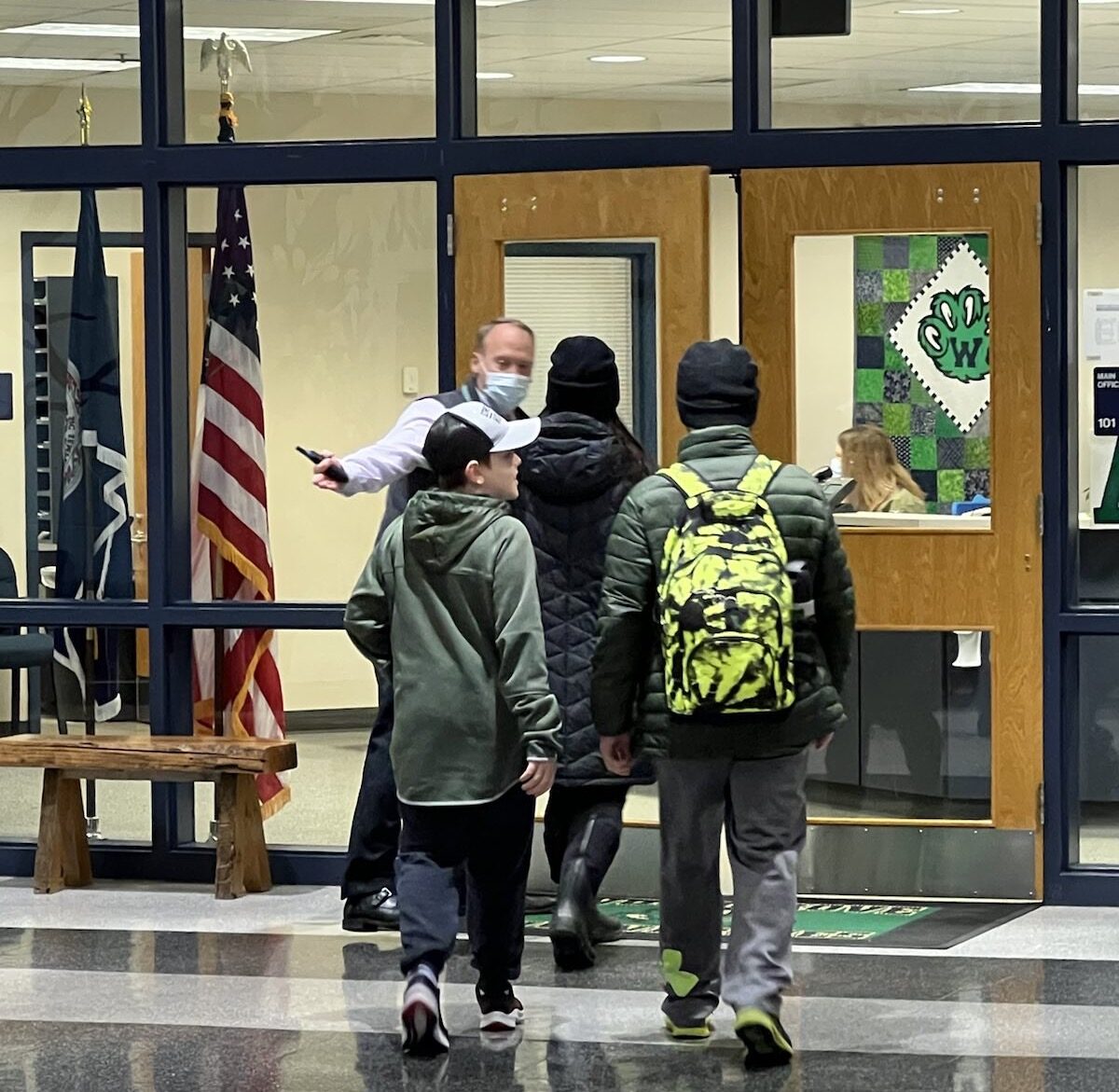 FAIRFAX COUNTY, Va.—As more and more students across Virginia receive suspensions for following a state executive order by not wearing a mask in school, parents and students have expressed disappointment at the new governor’s handling of the matter, saying that they feel he doesn’t ‘t have their back.

On his first day in office, Gov. Glenn Youngkin signed an executive order reversing a state-wide mask mandate in public schools to make mask wearing optional. Before the order was due to take effect on Jan. 24, more than 60 out of Virginia’s 137 school districts they announced would necessarily continue mask mandates, citing state health laws and CDC guidance.

The order has been challenged in three separate lawsuits: one filed by a group of 13 Chesapeake parents at the Virginia Supreme Court on Jan. eighteen; another filed by seven school boards at Arlington Circuit Court on Jan. 24; the third case was filed on Feb. 2 by parents of children with disabilities, arguing the mask-optional order heightens their childrens’ risk to serious illness.

On Jan. 21, three days before the order was due to take effect, Youngkin issued a statement saying he was confident the Virginia Supreme Court would uphold his order, adding, “In the meantime, I urge all parents to listen to their principal and trust the legal process.”

Administrators at the counties retaining the mask mandate, which includes all counties in northern Virginia, have latched onto this wording.

Tyler Johnson, 18, a senior at James Madison High School in Virginia’s largest school district Fairfax County, chose to abide by the governor’s executive order on Jan. 25, the first school day after the order took effect. He told his principal that he would follow the executive order, not a tweet or a statement.

For choosing not to wear a mask in school, Tyler has been on excused absence since then. Fairfax County Public Schools (FCPS) had continued its mask mandate, and is one of the school boards challenging Youngkin’s order at Arlington Circuit Court.

Tyler said he was “disappointed” with Youngkin’s statement on Jan. 21. He said his school administrators had been quoting the words “listen to the principal.”

“I felt disappointed, especially I voted for him to do what he said he wanted to do,” said Tyler.

Tyler’s father, Mark Johnson, a business owner and a licensed attorney, told the Epoch Times that he understood Youngkin is a negotiator. “We appreciate the negotiation process and going through the legal process.” However, “it really feels he’s backpedaling or betraying the very people that wanted him in office to do just this.”

Mark said that Youngkin “should probably create a middle ground” for students like Tyler to have an exemption from the mask mandate. “They [schools] are holding over these kids the leverage of a suspension on their record,” he added.

Jarod Missler, a senior at Woodgrove High School in neighboring Loudoun County, also voted for Youngkin. He was put on suspension on Feb. 2 for “defiance of authority” as a result of refusing to wear a mask at school.

The senior had applied to some universities, all in Virginia. He recalled that at least one college said if a suspension occurred after the application, the applicant would need to contact the college about that. “It would be fantastic if he [Gov. Youngkin] was able to scrub it from our record,” the student said.

Jarod is an Eagle Scout and a public safety cadet with a local police department. His father Andrew Missler, a local police sergeant, told The Epoch Times, that his son has “never been in trouble. [He’s] a good kid with not a single disciplinary action. Then he gets suspended for not wearing a mask.”

Scott Mineo, a father of a student in Loudoun County Public Schools, told The Epoch Times, that with his Jan. 21 statement, Youngkin “pulled the rug out from under us, or actually gave the rug to the principals to pull out under us.” He added that administrators cited Youngkin’s statement to many Loudoun County parents, including him.

Mineo’s daughter, a junior at Stone Bridge High School in Loudoun, received a 10-day suspension on Feb. 2 for not wearing a mask to school. Now with a suspension on her record for “defiance of authority,” Mineo questioned whether the honor roll student’s GPA would be modified as a result. Are you [Youngkin] going to expunge any sort of suspension that’s on a record for not doing anything?” He said, sharing the same concern as Jarod Missler.

The Epoch Times has reached out to Youngkin’s office and Loudoun County Public Schools for comment.

Tyler Johnson is not on suspension, but rather an excused absence. An excused absence turns into unenrollment after 15 school days. And, he was told on Jan. 25 that if he went to school unmasked again, he would receive a suspension.

Based on the principal’s words and FCPS Superintendent Scott Brabrand’s message about religious exemptions at the community virtual town hall on Jan. 24, Tyler’s father Mark reapplied on Feb. 1 and was rejected again.

“FCPS is not able to accommodate your request to not wear a mask at school in order to ensure student health and safety, particularly given the current levels of transmission in our community,” Douglas Tyson, assistant superintendent of FCPS region 1, wrote in an email to Mark Johnson on Feb. 2, citing the Virginia law (Senate Bill 1303) that would require the FCPS to follow CDC guidance “to the maximum extent practicable.”

He continued, “As Governor Youngkin has urged, please continue to follow your school’s mask rules while we await guidance through the legal process. If your child is unable to participate in a particular religious observance or ritual due to the mask requirement, please provide specific information regarding the accommodation you request (for example, when, where, and how often your child will need the exemption).”

The language used was almost identical to the rejection notice received in October, except for the paraphrasing of Youngkin’s statement.

Mark said both rejections cited FCPS policy as reasons, but didn’t address the actual exemption application, in which he listed health, development, and religious faith grounds.

The father added that he didn’t know anybody who had been granted a religious exemption at his son’s high school. So even though Superintendent Brabrand noted at the virtual town hall that a religious exemption was possible, “I’m saying ‘no.’ I think they [school administrators] are lying,” he said.

The Epoch Times has asked the FCPS about the number of religious exemption applications and outcomes, but did not receive a response by press time.

Tyler is unique for a student in that he owns a local landscaping company, and plans to continue running his business after graduating from high school in a few months. College isn’t in his immediate future plans. Still, he said he didn’t want to lose his high school diploma.

During the excused absence, Tyler is learning through Schoology, the school’s virtual learning platform, but cannot take tests. Therefore, according to him, he may put on a mask to take a test in school for his AP (Advanced Placement Program) Environmental Science class.

However, he doesn’t want to go to school masked all the time. “I wanted to stand up and make a statement that I didn’t really want to go along with this [mask mandate],” Tyler said.

According to Mark, instead of mandating parents and students to follow school board policies until the Supreme Court of Virginia reaches a decision, school boards should follow the executive order until the court decides otherwise.

However, in Mark’s view, FCPS is not likely to countenance this option, even if the court ultimately sides with the school board, because administrators fear losing control if parents and students are allowed to have the taste of being maskless in school.