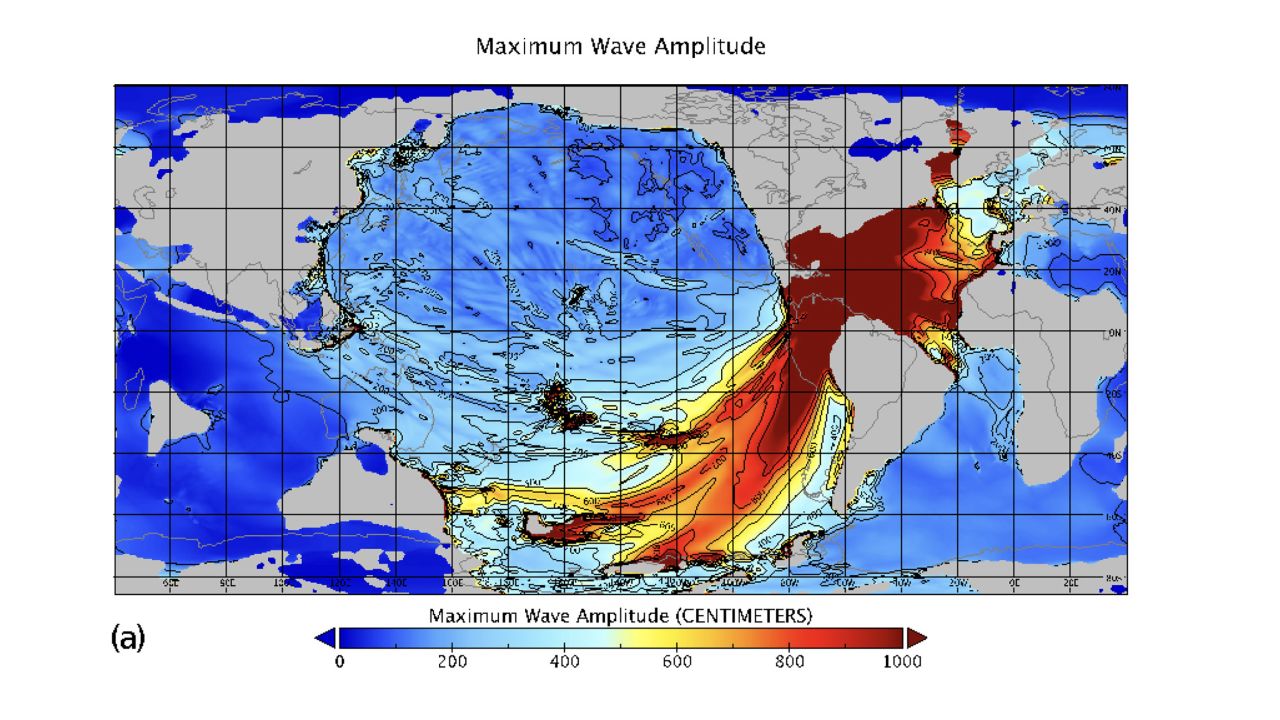 When a city-sized asteroid struck Earth 66 million years ago, it wiped out the dinosaurs and sent a monstrous tsunami that spread across the planet, according to new research.

The asteroid, about 14 kilometers wide, left a crater about 100 kilometers in diameter near the Yucatan Peninsula in Mexico. In addition to ending the dinosaur rule, the direct impact caused the mass extinction of 75% of animal and plant life on the planet.

This model shows the maximum amplitude of the tsunami wave after the asteroid impact 66 million years ago. credit: De Range et al

When the asteroid struck, it created a series of cataclysmic events. Global temperatures fluctuated, plumes of aerosols, soot and dust filled the air, and wildfires ignited as fragments of burning material from the impact re-entered the atmosphere and rained. Within 48 hours, a tsunami had engulfed the world, and was thousands of times more energetic than a modern tsunami caused by earthquakes.

The researchers set out to better understand the tsunami and its extent through modeling and found evidence to support their findings about the tsunami’s path and strength by studying 120 ocean sediment cores from around the world. A study detailing the results was published Tuesday in the journal American Geophysical Union Advances.

According to the authors, this is the first global simulation of a tsunami caused by the Chicxulub impact to be published in a peer-reviewed scientific journal.

According to the study, the tsunami was so powerful that it could produce waves more than a mile high and devastated the ocean floor thousands of miles away from where the asteroid struck. In fact, it erased the sedimentary record of what happened before the event as well as during it.

“This tsunami was strong enough to disturb and erode sediments in ocean basins halfway around the world, either due to a gap in the sedimentary record,” said lead author Molly Range, who began work as an undergraduate in the study. Or leaving a mess of old sediment.” student and completed it for his master’s thesis at the University of Michigan.

Researchers estimate that the tsunami in the Indian Ocean was 30,000 times more energetic than it was on December 26, 2004, the largest ever recorded, killing more than 230,000 people. The energy of the asteroid’s impact was at least 100,000 times greater than that of the Tonga volcanic eruption earlier this year.

Tracing the Path of an Ancient Tsunami

Brandon Johnson, a co-author of the study and an associate professor at Purdue University, used a large computer program called Hydrocode to simulate the first 10 minutes of Chicxulub’s impact, including the formation of the crater and the start of the tsunami.

This included the size and speed of the asteroid, which was estimated to be moving at 43,200 kilometers per hour when it struck the granite crust and shallow waters of the Yucatan Peninsula.

According to the simulation, less than three minutes later, rocks, sediment and other debris pushed up a wall of water from the impact, creating a 4.5-kilometer-high wave. This wave subsided as the detonated material fell back to Earth.

But as the debris fell, it created even more chaotic waves.

Ten minutes after impact, a ring-shaped wave about one kilometer high began to move across the ocean in all directions from a point 220 kilometers away from the impact.

This simulation was fed into two different global tsunami models, MOM6 and MOST. While MOM6 is used to model deep-sea tsunamis, MOST is part of the National Oceanic and Atmospheric Administration’s (NOAA) Tsunami Warning Center tsunami forecast.

Within 24 hours, the waves entered the Indian Ocean from both sides, passing through the Pacific and Atlantic Oceans. And within 48 hours of impact, large tsunami waves had reached most of Earth’s coast.

The underwater current was strongest in the North Atlantic Ocean, the Central American Sea, and the South Pacific Ocean, exceeding 643 meters per hour, which is strong enough to pull sediment from the ocean floor.

Meanwhile, the Indian Ocean, the North Pacific, the South Atlantic and the Mediterranean were protected with the worst of the tsunami’s underwater currents.

But gaps were also found in the sediment records of the North Atlantic and South Pacific Oceans.

The researchers were surprised to find that the sediments on the eastern coasts of New Zealand’s northern and southern islands were heavily disturbed by several lagoons. Initially, scientists thought this was due to plate tectonic activity.

But the new model shows that the sediments are directly in the path of the Chicxulub tsunami, despite being 12,000 kilometers away.

“We believe that these deposits are recording the effects of a tsunami impact, and this is perhaps the strongest confirmation of the global significance of this event,” Range said.

Although the team did not estimate the effect of the tsunami on coastal flooding, the model suggests that coastal areas of the North Atlantic and the Pacific coast of South America were probably affected by waves higher than 20 meters in height. As they approached the shoreline, the waves increased, causing flooding and erosion.

According to study co-author, University of Michigan professor and physical oceanographer Brian Arbic, the extent of the global flood after the impact and how far the effects of the tsunami can be felt will be studied in the future.

“Obviously the biggest floods would have been near the impact site, but even farther away the waves were probably much bigger,” Arbic said.