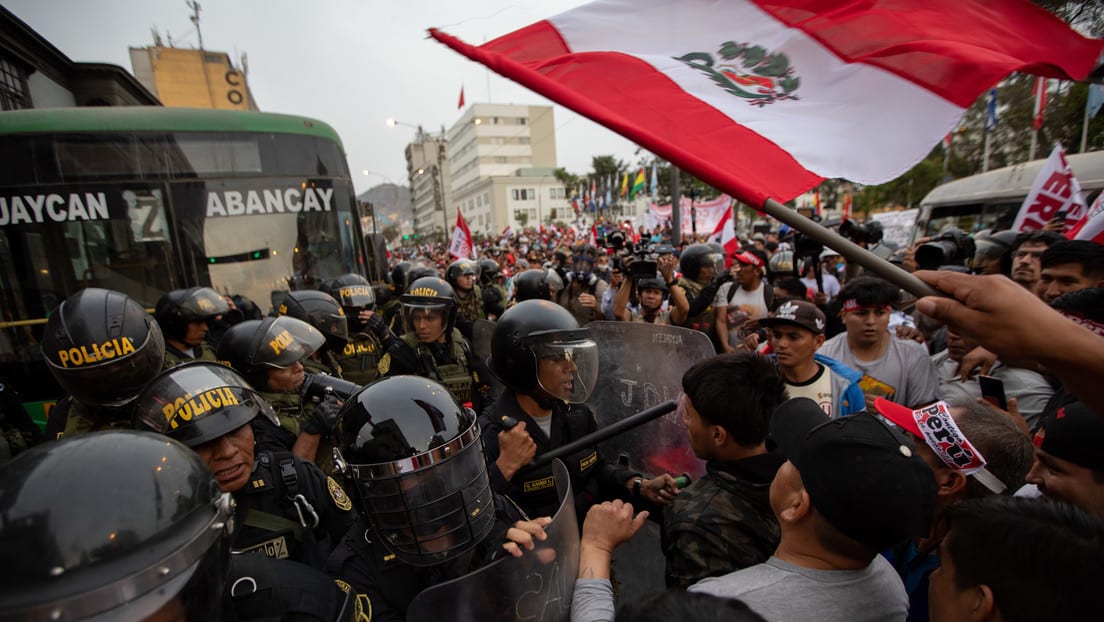 Thousands of people took to the streets of Lima and other parts of Peru yesterday to protest an exception imposed to prevent protests Demand for the resignation of President Dina Boluarte and the closure of Congressin a day in which Seven people were killed and more than five dozen were injured during clashes in the southern province of Ayacucho.Where the army released tear gas shells from the helicopter against the protesters.

without curbing the growing demonstrations, which After President Pedro Castillo was ousted by Congress, which has already left 16 dead and more than 200 prisoners, the new government decided to impose a curfew in 15 provinces.

In addition, the court ordered preventive detention for the ousted former president for 18 months, pending his investigation by the National Prosecutor’s Office for the alleged crime of insurrection, conspiracy, abuse of authority and serious disturbance of public peace after his failed attempt. Can be done Stopping legislation from the previous day and setting up a government of exception 7.

Pressure was maintained on the roads, with blockades on more than a hundred highways in at least 13 of the country’s 24 departments. In the south, five airports were closed in the provinces of Andahuales, Arequipa, Puno, Cuzco and Ayacucho.

The government assured the day before that the protests were orchestrated by “professionals” and “extremists” linked to “terrorist” and/or rebel groups Sendero Luminoso and Túpac Amaru, but yesterday the chief of the Ayacucho regional police, Antero Mejia, alleged that “vandals came to the exterior of the local air terminal with firearms, and fired at law enforcement officers.

The ombudsman’s office demanded that the armed forces “immediately cease the use of firearms and tear gas bombs dropped from helicopters” following clashes at the airport in Ayacucho.

For now, the Ayacucho regional executive held Boluaarte and the ministers of the interior, César Cervantes, and defense, Luis Alberto Otarola, responsible for the violence, and pegged the balance of conflict between protesters and elements at seven deaths and 52 injuries. Alfredo Mendeville Duarte Airport reported RPP Network. Thousands of people took to the streets around the Congress in Lima, which led to clashes with the police. The mobilization in the capital was part of a “day of struggle” called by the General Confederation of Peruvian Workers, one of the country’s largest unions.

The government decided to impose a five-day curfew in the 15 provinces of Arequipa, La Libertad, Ica, Apurimac, Cusco, Puno, Huancavelica and Ayacucho departments as part of a nationwide state of emergency due to massive social protests.

The measurement starts at 6, 7 or 8 pm depending on the location, and lasts till 4 am the next day.

Trains for Machu Picchu tourists have been suspended and hundreds of tourists are stranded. About 2,000 Bolivian cargo trucks are blocked at the border between the two countries.

Congress President Jose Williams pointed out that the debate will continue today to analyze whether to go ahead with the 2023 general elections, in addition to reduction in presidential and parliamentary mandates.

(with information from La Jornada)

The opposition compared the arrest of the Vice-President of the European Parliament with the situation of Christina Kirchner: “Nobody talks about the law”