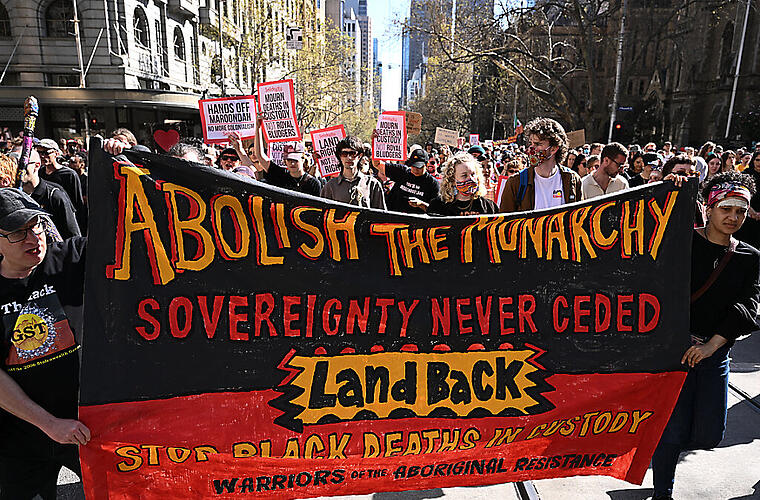 Australian media reported that thousands took to the streets on Thursday to demand the departure of the Taj and the country to turn into a republic, on the occasion of a national mourning holiday declared by the government. Demonstrations took place in other metropolitan cities including Melbourne, Sydney and Adelaide.

In front of the British Consulate in Brisbane, protesters burn an Australian flag – the national flag features the Union Jack, the national flag of the United Kingdom, in the upper corner. In Sydney, tribute to Elizabeth II was painted in the colors of the Australian Aboriginal flag.

Many Aborigines particularly want to break away from the monarchy, as they associate it with the colonization of Australia and the oppression of indigenous peoples. At the time, tens of thousands of Aboriginal children were taken away from their parents to be “re-educated” in homes and Christian missions according to the views of white immigrants.

“Today is about reflecting on the pain and trauma that the monarchy has brought to our country,” a protester in Melbourne told 9News. “When will anyone mourn for the people we have lost? For all my ancestors who mourn for them?”

In a referendum in 1999, 45 percent of Australians wanted their country to become a republic – the rest voted against at the time. However, since the death of the Queen, there has been a growing demand for a new referendum.

Prime Minister Anthony Albanese recently said that he is not currently planning a referendum on the issue. Now is the time to pay tribute to the late queen. However, in the past, he has repeatedly indicated plans to make Australia a republic. (SDA/DPA)

Biden-Putin square off as tensions rise along Ukraine border