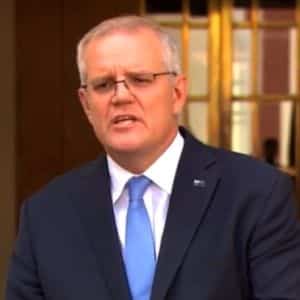 Australian Prime Minister Scott Morrison called parliamentary elections this Sunday for May 21, seeking re-election to a fourth three-year term, but Anthony Albanese’s Labor opposition looks like the favorite in the election.

Australia declares state of emergency due to flooding

The Governor General will formally suspend the 46th Parliament and dissolve the House of Representatives on Monday morning, allowing the issuance of instructions for a six-week campaign.

News in development: Canberra-Australia. Prime Minister Scott Morrison visited the Governor General and issued a decree dissolving the Australian Parliament and calling for an election to elect a new government on 21 May. pic.twitter.com/6yd8XFmcOe


Morrison is keen to portray the upcoming race as an election over the country’s economic security, which he called the most volatile and uncertain time since World War II.

He also portrays Anthony Albanese’s opponent, who, according to polls, is going to become prime minister, an unknown risk.

In the previous election in 2019, Morrison and his government won a narrow victory despite opinion polls pointing to the leadership of the centre-left opposition Australian Labor Party.

Morrison’s governing coalition has 76 seats in the House of Representatives, the minimum required to remain in power.

Polls show that there will be a change of government, and the opposition Labor Party, led by Albanese, will become a candidate for office.

But Albanese continues to pressure Morrison, portraying the race as a referendum on government, saying the Coalition report showed he did not deserve re-election for a fourth term.

The Labor leader said he was “honoured” to run for prime minister and said he was ready for a “better future”.

“Australians deserve better. This government has no agenda for today, much less a vision for tomorrow,” Albanese said.

Australia concerned about publication of stolen data in cyberattack