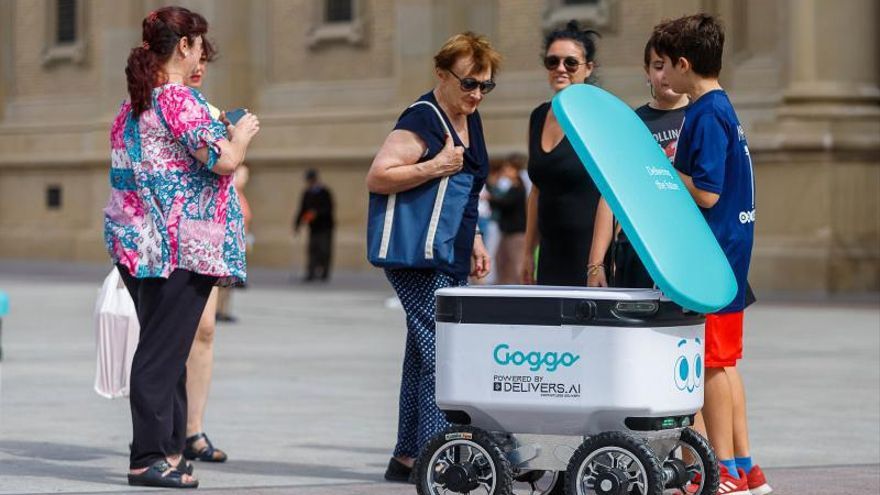 The future is here. Autonomous Delivery Robot from the company Gogo will enter service Zaragoza Later this month after ending the tests done from last summer. Initially there will be five and they alone will be able to pick up orders and carry them to their recipients However, yes, as long as they are in the area of ​​operation that has been initially demarcated.

The project was presented last July and then attracted the attention of many citizens and the media. Mayor, George Azcon, and councilors for mobility, Natalia Chueca, They participated in the announcement and since then these friendly-facing robots have been mapping the streets of the city center to establish a kind of digital image and thus learn of the environment through which they will roam alone.

Thus, Gogo’s delivery robots have already been spotted around town during the summer, although there was always a person with them checking that everything was going according to plan.

«These days they were working with all the sensors turned on to capture everything and we are testing that they work. It was about seeing that the wait and delivery times were adequate and the maps they worked for,” explains the now vice president of the company, Eduardo Uriarte. They have already made mock requests to analyze how the robots responded and, in the absence of minor changes, everything is going according to plan.

“It was fun to see how people reacted to them. Many people came to ask what they are and for what. The truth is that we’ve got a lot of support on the road.”Acknowledges Uriarte responsible for the technology and expansion of the Gogo network.

Thus, with everything almost ready, the company expects to start delivering orders for the five robots they are permitted to have at the end of the same month of September. So far, up to 15 companies have been interested in the services, says Uriarte. aunt To get your package and food to your customers. they are among them Glovo, Telepizza and Carrefour, Among others dedicated to electronic commerce and clothing sales.

The area of ​​operation will be limited to an area of ​​1.2 square kilometers in the heart of the city for the time being. This area will be delimited, from east to west, by Paseo la Mina and Paseo Independencia, and from north to south by Plaza del Pilar and Paseo Damas.

Once the project is consolidated and proven that it works correctly, it is expected to double the surface on which these robots will work, as well as their number. for now, Gogo gets permission from the city council to take five of these self-employed delivery men on the road. But they expect to reach 10 or 15 in the coming months.

For users, nothing will change when it comes to buying food at home. When ordering a hamburger through Glovo, for example, customers will receive a message a minute before they arrive through this app so that Go to your portal and be able to get dinner, because you don’t climb the stairs at this time. “We promote exercise”, laughs Uriarte, The robot drawer will open with a code that will be sent to the customers.

Robot, similar to a four-wheeled car, a . can walk on Maximum speed is 5 kilometers per hour And load up to 30 kg. They are equipped with the latest technology: they have internal sensors and video cameras that allow them to see their entire environment and use artificial intelligence to avoid any obstacles from people, animals, cyclists, furniture or any elements. give. comes their way.

These sensors allow the robot to self-detect and recognize the environment with high precision in real time, which allows it to adapt its trajectory and speed to change its course and avoid any impacts or if necessary. Allows you to stop.