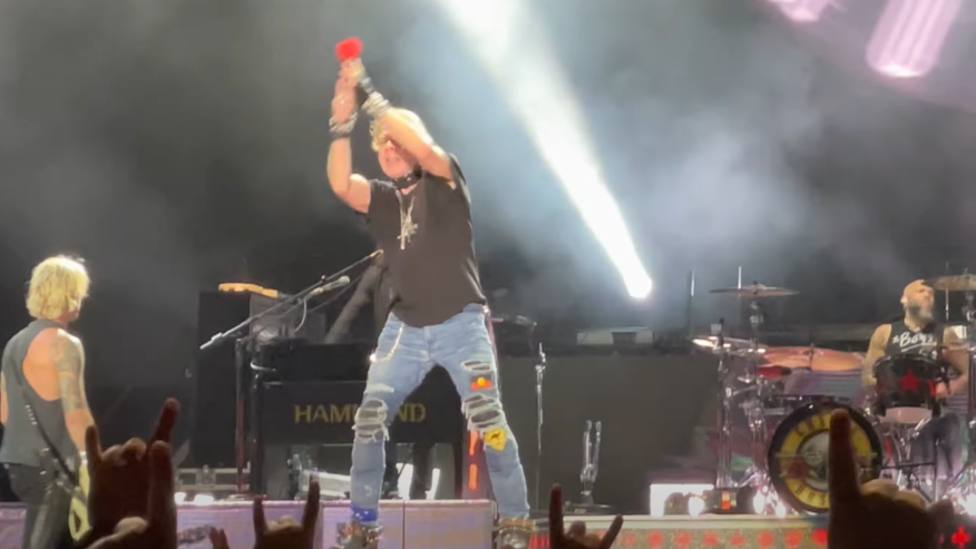 Axl Rose Responds to an Australian woman’s complaint that the singer’s microphone hit her in the face during a concert guns N Roses Tuesday (Nov. 29) in Adelaide, Australia. according to blabbermouthThe alleged incident occurred while Rose and her bandmates were performing the last song of their set, “Paradise City”, At the end of the song, the singer threw the mic towards the audience, reportedly hitting the woman in the face.

A woman with facial scars told ABC: “I was just warning people: If Axl sings ‘Paradise City’, be prepared to back away and take cover”and added: “I didn’t intend to win anything”, The woman told the Adelaide Advertiser that the microphone hit the bridge of her nose. She said an off-duty policeman pulled her over after being beaten up, tended to her and tried to stop her bleeding nose.

“I was in shock and hyperventilating”, she claimed. “I was like, ‘Oh my god, my face is sunken'”, He said he was concerned that other concert-goers would be injured as Guns N’ Roses continued their tour in Melbourne on 3 December.“What if the microphone was a few centimeters to the right or left? I could have lost an eye. If they turned my head and hit me on the temple, it could have killed me.”Declared affected woman.

In response to the woman’s complaint, Rose posted a lengthy message on social media: “I have learned that a fan may have been injured at our concert in Adelaide, Australia, possibly by being hit by the microphone at the end of the concert, when I traditionally always throw the microphone at the fans.”wrote. “If true, of course. We don’t want anyone to get hurt at any of our concerts.”

He clarified what his next concert would be like: “After throwing the mic at the end of our shows for over 30 years, we’ve always thought it was a familiar part of the end of our performances that fans wanted and knew about when they got the chance to grab the mic. However, In the interest of public safety, from now on We will refrain from throwing microphones or anything else at the fans during the performance.”

He ended with a message to explain what happened: “Unfortunately, there are people who, for reasons of their own, have chosen to cast this issue in a more negative and irresponsible light that could not be further from the truth. We hope the public and of course our fans understand that sometimes this happens. Thank you all very much for your understanding.”

Apparently, another fan ended up with a microphone thrown by Axl into the audience. It was not the first time that a microphone had been thrown by Rose into the crowd at an Australian music festival, causing injuries. in 2013, A Perth man was allegedly beaten A microphone thrown by Axel entered his mouth, damaging his two front teeth. After what happened, he appealed to the courts to demand Compensation To enable him to recover the cost of A$5,000 in dental fees.

A BC man survives at sea for six days after a boat sinks in the Caribbean. World Nation News

Sweden to give Pfizer vaccine to children aged 12 to 15, rejects Modern