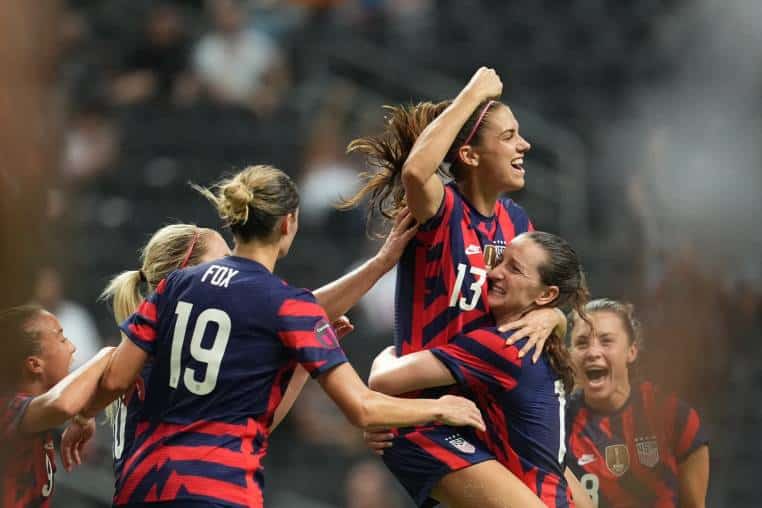 Progress is constant and the passion for women’s football is growing all over the world, thanks to the fight for talent and equality.

Women’s football is gaining ground around the world. After a long struggle in an environment dominated by men, the best female soccer players are already writing their own history, and doing it in a big way. The attraction grows among fans and also for those who have fun through https://www.betfair.com.co/apuestas-deportivas/futbol/sp-1/ .

To reflect on the enormous growth of women’s football, it is enough to look at the past major tournaments. At Euro 2022, played in England, 87,000 people attended the final and over half a million fans registered in total over the entire tournament.

The rise of women’s football is also beginning to flourish with big brands coming in for sponsorships and investment. In addition, the television channels of the main European women’s football leagues, especially the Spanish one, cooperate to promote the game.

Looking ahead, there is one big target ahead: the 2023 World Cup. The best female soccer players will be present at the World Cup to be played in Australia and New Zealand. This will be the ninth edition and the first to feature 32 teams, the usual number in the men’s world championships.

As revealed in a recent statement by FIFA, they aim to reach 60 million female football players worldwide by 2026. And for this they believe that the World Cup will be a decisive factor in attracting the public and the players.

American striker Alex Morgan is one of the best female soccer players and without a doubt, one of the most media and famous.

At the age of 33, Alex Morgan plays for the Diego Wave of the National Women’s Soccer League. With the United States team, he won 2 World Cups and a gold medal at the London 2012 Olympic Games. Furthermore, he won 4 national titles and the Champions League when he played for Olympique Lyon in 2017.

But beyond the titles, it is one of the faces that best reflects the evolution of women’s football around the world. To cite just one example, she was the first player to appear on the cover of the FIFA video game, sharing the ad with Lionel Messi, no less.

Another American, with talent and unmatched charisma. Megan Rapinoe is one of the greatest female soccer players of all time.

At 37, she was a key figure in the fight for American women to defend their wage rights. Although women’s soccer in the United States has always been strong and successful, players earned a salary that was very different from that of the men’s team.

Her figure also attracted big brands who took it as a flag in the fight for equality. Like Alex Morgan, Rapinoe was part of the United States’ title run at the 2015 and 2019 World Cups and the gold medal at London 2012.

It is true that women’s football grew rapidly in Europe. The context for the development of girls starting to play soccer is nowhere more auspicious and supportive than in South America. But beyond that, the South American talent is undeniable and it pays off.

Marta, a Brazilian idol and one of the best female soccer players of all time, can teach that. She overcame prejudices to make a place in a field dominated by men and became a popular reference in sports in Brazil.

In 2019, she reached the record of being the highest goalscorer (17) in the World Cup. And is the only player to score in 5 different editions, the same mark that Cristiano Ronaldo achieved in the men’s World Cup in Qatar.

“I am delighted to make history in a sport that many see as a men’s game. We are breaking records, showing that women’s football has great potential for growth. This victory is not only for me, but For all the women out there.” Marta highlights his titles, with the 36-year-old Brazilian having won 3 Copa Américas, 2 Olympic medals and 1 UEFA Champions League.

The development of women’s football was not easy. In an environment dominated by men, women fought and continue to do so to equalize their rights and showcase their talents. It is already common to see thousands of fans packed into stadiums. And the passion extends even further for those who want to play through Betfair.

Flag was the best female football player. And now millions of girls around the world follow her legacy. The future invites you to dream of football without gender distinctions. With equal passion for all.

Hiltzik: Elon Musk proves why the billionaire tax is so important