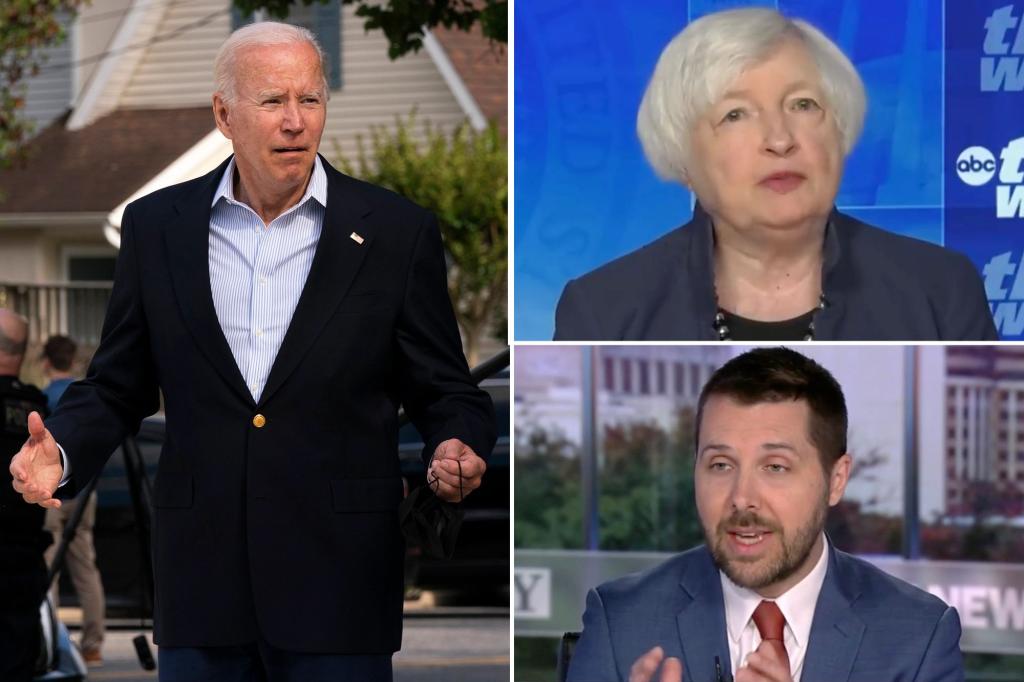 Top officials in the Biden administration made the rounds on Sunday news shows to tout the strength of the economy and downplay the possibility of a recession – an assessment at odds with some CEOs and economists.

Treasury Secretary Janet Yellen claimed on ABC that a recession is not inevitable, although she sees the US economy slowing in the coming months.

“Well, I expect the economy to slow down, it is growing at a much faster rate as the economy – as the labor market has improved and we reach full employment, it is only natural that we are going to be stable and Let’s look forward to the transition to stable growth. But I don’t think a slowdown is inevitable at all.” Yellen said ABC News “This Week”.

He said the priorities of President Biden and Fed Chairman Jerome Powell are to reduce the high rate of inflation while maintaining a strong labor market.

National Economic Council director Brian Deez echoed Yellen’s optimism – even as he acknowledged Americans are pulling up to the pump and seeing a shock to gas prices around $5 a gallon “create some uncertainty”. and real economic hardship arises.”

“But at the same time, it is important as Americans that we recognize the unique strength in this economy,” he said on “Fox News Sunday,” noting an unemployment rate of 3.6% and low mortgages and credit cards. of error.

“As we move through this transition, not only is a recession not inevitable, but we as policymakers can take steps to build on our unique strengths in the American economy and achieve that steady and steady growth.” We can try to get what we all want as quickly as possible,” Deez said.

Last week, Biden acknowledged that Americans are “really, really down” due to record-high gas prices, inflation and a lack of baby formula – and blamed the woes on the lasting effects of the coronavirus pandemic.

He said he was confident that America would recover.

“First of all, it’s not inevitable,” Biden said. “Second, we are in a stronger position than any other country in the world to address this inflation.”

Larry Summers, who served as Treasury Secretary from 1999 to 2001 and was an economic adviser in the Obama administration, said he didn’t want to “make forecasts of course.”

But looking at a range of indicators, including what’s happening in the stock market, consumer expectations and “the simple fact that inflation is supply and demand… the prime possibility would be that by the end of next year, we’ll see a recession in the US economy,” Summers said on NBC News. “Meet the press.”

The Federal Reserve has been scrambling to tighten monetary policy in response to inflation and last week raised its benchmark interest rate by three-quarters of a percent this week for the first time since 1994.

Despite the aggressive action, economists polled by the Wall Street Journal said the country is 44% likely to enter a recession next year – a significant increase from the 28% who said so in April and the 18% agreed in January.

“The Fed is slamming on the brakes. It’s hard to survive a recession… in this situation,” Michael Moran, chief economist at Daiwa Capital Markets America Inc., told the Wall Street Journal.

During a “Fox News Sunday” interview, host Shannon Bream asked Deez in the Wall Street Journal about another survey that found 60% of CEOs expect a recession in their geographic region over the next 12 to 18 months.

Deez said in his conversation with the CEO, he told them that the US economy is going through a transition and consumers are changing to accommodate their spending habits. I

“For some companies, this is a real challenge. For others, it is an opportunity,” he replied.

“So when you hear us talking about these policy measures, it’s because what we can do right now is a signal that we all get it, that inflation should be our top economic priority, But there are things we can do. There are tools we can deploy. There are steps we can take now,” he said.

Review: ‘Band’s Visit’ in sci-fi is not your typical musical (and that’s a good thing)