Biden warns Putin at UN: “We will not allow nuclear war” 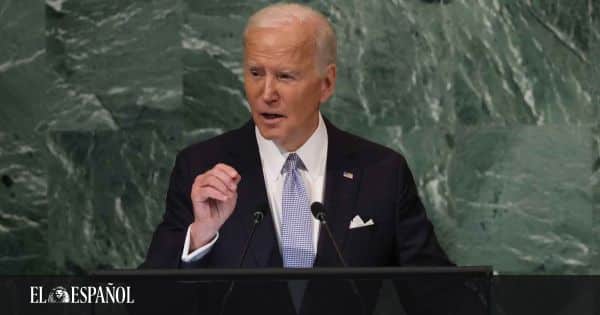 President of the United States of America, Joe Bidenintervened in the UN General Assembly and issued a clear warning to Russian President Vladimir Putin: “We will not allow nuclear war”Referring to the possible escalation of violence by the Russian military in Ukraine.

The president once again reassured that “the United States is with its allies” and warned the rest of the world’s leaders that the war in Ukraine “is at risk” with everything that this institution represents.

“A nuclear war cannot and should never be won,” insisted Biden, who had no hesitation about mentioning Putin as he began his speech and attacked him. The US president accused the head of the Kremlin of wanting to end Ukraine’s “right to exist”. “He attacked his neighbor with the intention of getting him off the map”He added.

Biden explained to the General Assembly that “Putin says he had to act because Russia was being threatened. But no one threatened Russia. No one called for a conflict except Russia.”

And he condemned the atrocities committed by Moscow since the beginning of the war. The rampant crimes, rapes, tortures… and “absolute disregard for human rights” committed in Izium. In this sense, the American leader referred to the 1948 founding charter of the United Nations in which “the protection of human rights appears as one of its primary objectives.” Even then, “In 2022 we are able to verify that human rights are still under threat in some parts of the world”,

In addition, the US president denounced actions taken in recent hours by Putin, who has ordered the mobilization of 300,000 Russian reservists, partly for the war in Ukraine.

And he accused Putin of making “irresponsible threats about the use of nuclear weapons” after the Russian leader promised to defend his country “by all means” and said that those with nuclear weapons were “blackmailed”. wanting to do, they must know that “the compass rose may be against them”.

Having condemned the Russian action, Biden took the opportunity to warn of other “worrisome trends” in the field of nuclear proliferationNot only because of Russia, but also because of the policies of China, North Korea and Iran.

In the case of Iran, Biden said he is ready to return to the 2015 nuclear deal, which was abandoned by Washington during the Donald Trump administration, as long as Tehran fulfills its obligations.

“The United States is clear: we will never allow Iran to acquire a nuclear weapon. I still think diplomacy is the best way to achieve this result,” he said, in statements collected by efe,

more broadly, Biden calls on everyone to re-commit to strengthening nuclear non-proliferation regime And assured that, no matter what happens in the rest of the world, America is ready to seek ways to control this type of weapon.

Biden also talked about the food crisis during his speech, which was exacerbated by the crisis in Ukraine and threatened famine in poor or developing countries. about, President announces $2.9 billion in aidThat amount adds to the $6,900 million his government has already allocated this year for food security projects around the world.