Biden’s resounding victory: his party will retain majority in the US Senate 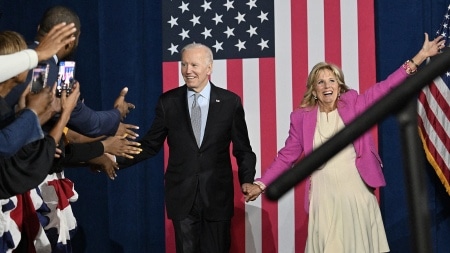 The ruling Democratic Party retained control of the US Senate in the midterm elections, a major victory that will make it harder for the Republican opposition to thwart President Joe Biden’s agenda in the remaining two years of his term.

The dice were still cast in the House of Representatives, where Republicans sought to hold on to a slim majority even after last Tuesday’s polls, in which the Democratic performance was much better than expected.

CNN and other media projected that Democrat Catherine Cortez Masto would retain the Nevada Senate seat, leaving the party controlling the White House with 50 of the 100 seats in that chamber.

This ensures the Democrats a majority, as Vice President Kamala Harris, in her capacity as president of the Senate, will retain the tiebreaking power in the vote since Biden is inaugurated in January 2021.

Senate Democratic leader Chuck Schumer said, “We have done much more and will do much more for the American people.”

The Republican leader campaigned under his Make America Great Again (MAGA) banner for hundreds of candidates running for congressional seats in the November 8 election, with mixed fortunes.

In any caseTrump, who has been saying that Biden stole the 2020 election, plans to release his candidacy this week to compete again for the White House.Something that could lead to a repeat of his duel from two years ago against the current President.

Schumer said, “The American people rejected — and strongly rejected — the undemocratic, authoritarian, hateful and divisive direction in which MAGA Republicans wanted to take the country.”

Biden celebrated the achievement from Asia, where he was attending a summit, and also blamed Trump for the Republicans’ poor showing in the re-election to Congress.

The 79-year-old president has said publicly and privately that he intends to run for re-election and will run with even greater determination if Trump, whom he views as a threat to democracy, jumps into the race.

Biden told Cambodia that Trump’s lies about fraud in 2020, among other things, have created an identity crisis in the Republican Party.

“I heard it from someone in the press: ‘Trump has only revealed what the Republican Party is. I think what they have to decide now, as we’ve done in the past, is who they are,'” he said.

With the results already decided in Nevada, Georgia is the only state where both parties are still competing for a Senate seat.

The party would also retain control of committees that have the power to investigate or oversee the government, and would be able to veto laws passed by the House of Representatives if Republicans win them over from Democrats.

Some 20 seats in the lower house have yet to be defined.

According to the TV network, Republicans will have just a five-seat majority in the House of Representatives, 220 to 215, a far cry from the dozens of seats they had hoped to win in Biden’s midterm elections.

However, he had already anticipated that he would use that advantage in the House of Representatives to launch a parliamentary investigation against the Biden administration and its allies.

The elections were conducted in the context of high inflation and dissatisfaction with the sharp rise in food and fuel prices, something the Republican candidates focused on.

Even then, Biden not only did not face the expected heavy punitive vote, but also delivered the best midterm election for an American president in 20 years.,

analysts attributed this tol The economic growth and job creation that the United States has experienced since its inauguration and also the high mobilization of voters to defend abortion rights,

Biden and Democratic congressional candidates campaigned that they would fight to enact a federal legal abortion law after the Supreme Court struck down that authority in July, leaving it up to the states.

Since then, many red states have banned abortion.

Before the election, Trump, 76, had predicted a major Republican victory and indicated several times that he would use that achievement to launch his presidential run.

Despite the fact that the latter did not happen, the former president maintained his plan to announce his candidacy, and will do so on Tuesday from his residence in Mar-a-Lago in the southern state of Florida, one of his advisers said. , Jason Miller, first two days.

Trump’s candidacy for the presidency will be his third after losing to Biden in 2020 and defeating Hillary Clinton in 2016.

Following his defeat with Biden, the tycoon promoted unsubstantiated fraud claims, some of which led hundreds of his supporters to storm Congress in January 2021 as the Democratic presidential victory was certified.

Although more than 100 Republican candidates challenging the results of the 2020 presidential election won their respective races, some of Trump’s favorites lost key seats to the Democrats.

The midterm elections renewed 435 seats in the House of Representatives and 35 of the 100 seats in the Senate. Governors of 36 out of 50 states were also elected.

Democrats won the governorships of Wisconsin, Michigan and Pennsylvania, potentially pivotal states in the presidential election that would see Biden win over Trump in 2020.

However, Republicans won Florida, Texas and Georgia, another state that Biden narrowly won two years ago.

The United States looks strong enough to avoid recession, according to IMF official

US must strengthen IMF at February G20 meeting – OMFIF

Using ‘science’ to market cookies and other products backfires with consumers