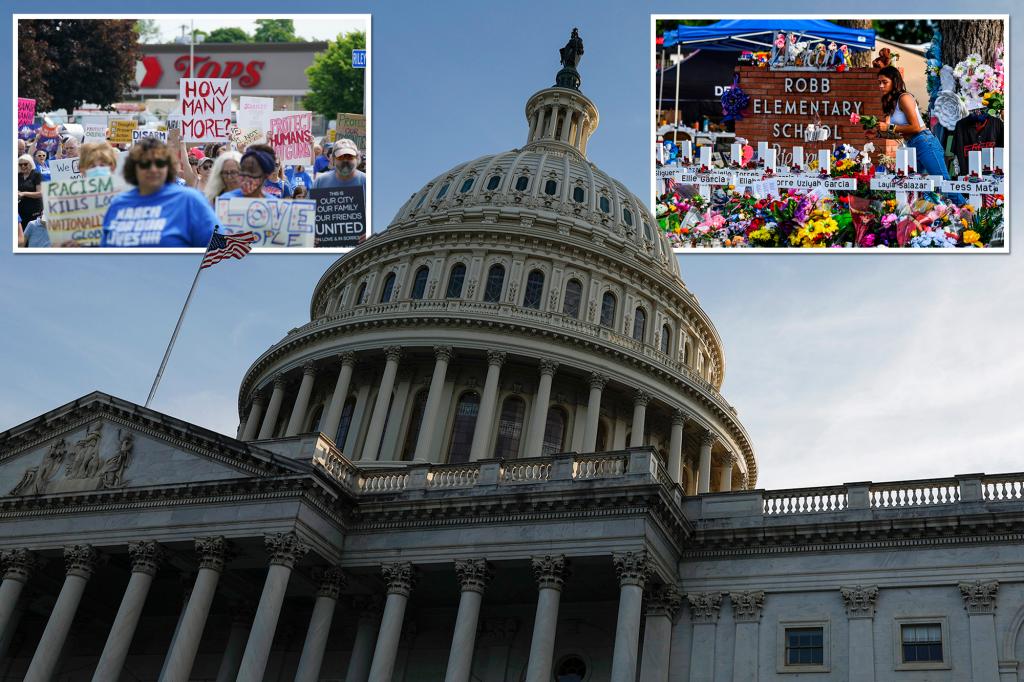 The bipartisan gun bill passed a key procedural hurdle in the Senate late Tuesday night, leaving the House open to the measure later this week as lawmakers struggle to secure final passage before Congress goes into a two-week recess.

The Senate voted 64 to 34 to move the bill, including 14 Republicans, after negotiators unveiled the text of an 80-page bill on Tuesday, all but guaranteeing Congress will pass its first substantive gun control bill in decades.

Having the backing of 14 GOP senators makes it likely that the measure will be able to pass the 60 vote threshold needed to pass legislation in a 50-50 divided Senate.

Senate Majority Leader Chuck Schumer said he would hold a vote this week.

It will take passage to the Democratic-controlled House of Representatives before it gets to President Biden’s desk for his signature.

Last month’s mass shootings at a grocery store in Buffalo that killed 10 people and at an elementary school in Uvalde, Texas that killed 21 people, including 19 students, sparked national outrage over gun violence and spurred a bipartisan group of 10 lawmakers into action.

The Democrats didn’t get the hard limits they wanted — there is no ban on machine guns, and it doesn’t raise the age of those who can legally buy semi-automatic weapons from 18 to 21.

The shooters in Buffalo and Uvalda were both 18 years old and used military grade assault weapons.

But the legislation, the most sweeping since Congress passed a ban on assault weapons in 1994, provides states with financial incentives to create mental health programs and enact red flag laws, requires enhanced background checks for gun buyers aged under 21, tightens fines for straw purchases. firearms and closes the so-called “boyfriend loophole” that prohibits romantic partners convicted of domestic violence and unmarried to their victims from purchasing firearms.

Senator Chris Murphy (D-Connecticut), one of the Senate’s most vocal gun reform advocates, hailed the deal with the Republicans as “the most important anti-gun violence legislation Congress will pass in 30 years.”

“This is a breakthrough,” Murphy said. “And, more importantly, it’s a bipartisan breakthrough.”

Senator John Cornyn of Texas, the top Republican negotiator, acknowledged that this was not to everyone’s satisfaction.​

“Some think it’s going too far, others think it’s not enough. And I understand. That is the nature of compromise,” Kornin said.

“I believe the same people who are telling us to do something are sending us a clear signal to do what we can to keep our children and society safe. I am confident that this law is moving us in a positive direction,” he added.

Further bolstering the likelihood of the legislation’s approval, Senate Minority Leader Mitch McConnell expressed his support, calling it “a sensible package of popular moves to help make these horrific incidents less likely while fully upholding the rights of law-abiding citizens enshrined in the Second Amendment.” ”

But National Rifle Associationwhich supported measures such as strengthening school security, said she would oppose the law.

“He fails at every level. This does little to truly combat violent crime, opening the door to unnecessary burdens on law-abiding gun owners exercising Second Amendment freedom,” the statement posted on Twitter read.