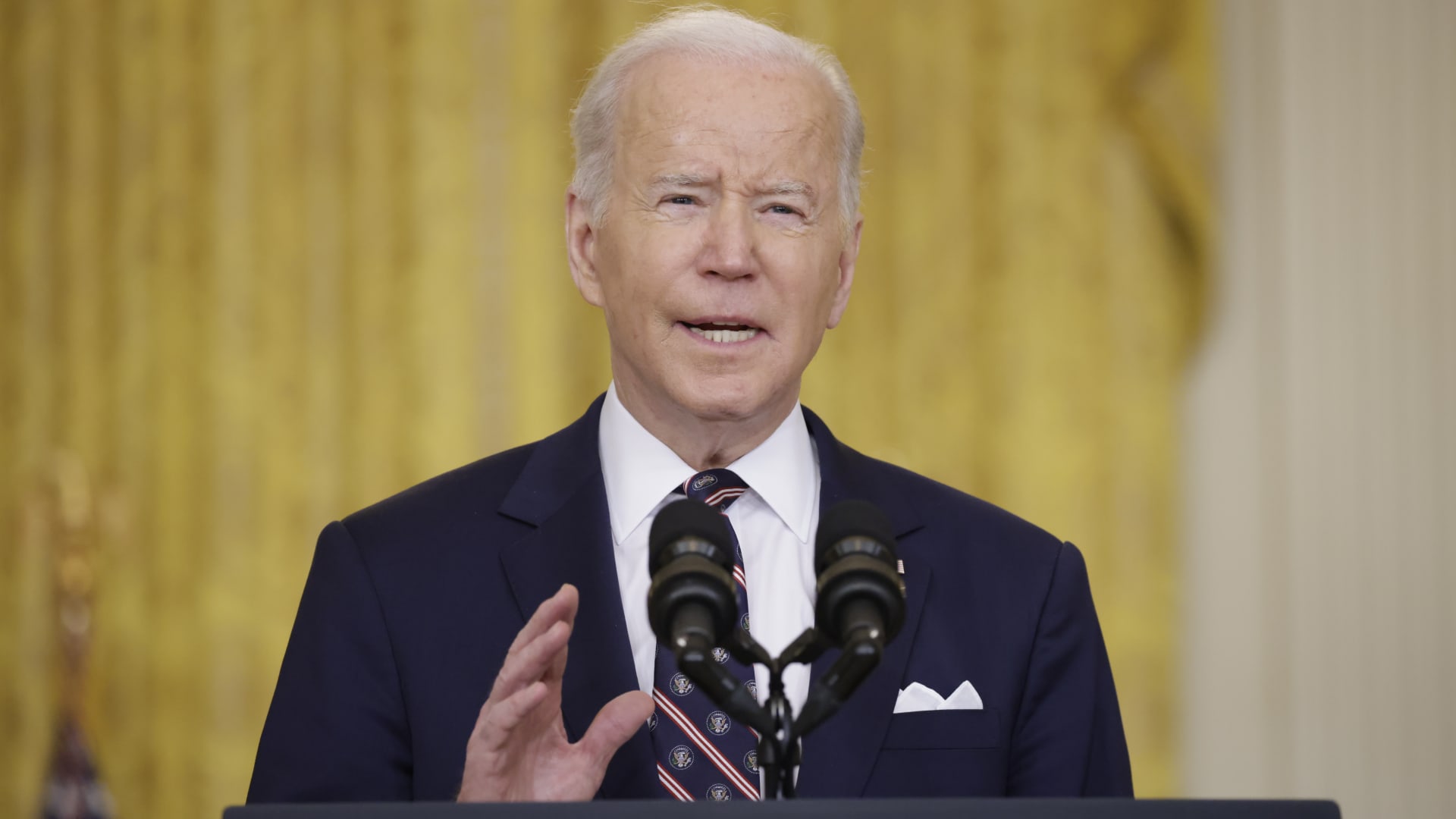 US President Joe Biden speaks on Russia and Ukraine in the East Room of the White House on February 22, 2022 in Washington, DC.

Within hours, the leaders of the United States, Germany and the United Kingdom, among others, criticized the Kremlin for the attack.

Following are his comments and statements.

US President Joe Biden: “The world will hold Russia accountable.”

The prayers of the whole world are with the people of Ukraine tonight as they face an unfair and unjustified attack by Russian military forces.

President Putin has chosen a pre-planned war that would bring a devastating loss of life and human suffering. Russia alone is responsible for the death and destruction caused by this attack, and the United States and its allies and allies will respond in a united and decisive manner.

The world will hold Russia accountable.

I am shocked by the horrific events in Ukraine and have spoken to President Zelensky to discuss next steps. President Putin has chosen a path of bloodshed and destruction by launching this unprovoked attack on Ukraine. Britain and our allies will respond decisively.

Russia’s attack on Ukraine is a gross violation of international law. There is no justification for this. Germany strongly condemns this reckless act of President Putin. Our solidarity is with Ukraine and its people.

Russia must stop this military action immediately. Within the framework of the G7, NATO and the European Union, we will coordinate closely today. It is a terrible day for Ukraine and a dark day for Europe.

I strongly condemn Russia’s reckless and unprovoked attack on Ukraine, which puts the lives of countless civilians at risk. Once again, despite our repeated warnings and relentless efforts to engage in diplomacy, Russia has chosen a course of aggression against a sovereign and independent country.

This is a serious violation of international law and a serious threat to Euro-Atlantic security. I call on Russia to immediately cease its military action and respect Ukraine’s sovereignty and territorial integrity. NATO allies will meet to address the consequences of Russia’s aggressive actions. We stand with the people of Ukraine in this terrible time. NATO will do everything possible to protect and defend all allies.

Canada called on Russia to immediately cease all hostile and provocative actions against Ukraine and to withdraw all military and proxy forces from the country. The sovereignty and territorial integrity of Ukraine must be respected and the Ukrainian people must be free to determine their own future.

Russia’s action will have dire consequences. ,

… To counter these attacks on Ukraine, Canada will take additional action to prevent undue aggression from Russia. We stand here in Canada with Ukraine, its people and the Ukrainian Canadian community. Russia’s brazen acts will not be spared.

There is a heavy fighting going on right now and as I told you earlier, we will fight for our country.

We are calling on the US – in the West – to immediately implement heavy sanctions, including the immediate disconnection of Russia from Swift [ Society for Worldwide Interbank Financial Telecommunications] System.

We need access to more heavy weapons, financial aid. We are calling for a fierce isolation of Russia – it is an attack on the world order.

The attack on Ukraine is an attack on democracy. I commend @POTUS for his strong leadership in imposing the first tranche of swift and severe sanctions to counter Russian aggression. The United States and our allies stand together in our unwavering support of the people of Ukraine.

We strongly condemn Russia’s unprecedented military offensive against Ukraine. By its unprovoked and unreasonable military actions, Russia is in gross violation of international law and undermining European and global security and stability. We regret the loss of life and the human suffering.

We call on Russia to immediately end hostilities, withdraw its forces from Ukraine and fully respect Ukraine’s territorial integrity, sovereignty and independence. Such use of force and coercion has no place in the 21st century. The European Union stands firmly with Ukraine and its people as they face this unique crisis.

EU leaders will meet later today. European Council President Michel has urgently called an extraordinary meeting of the European Council to discuss the crisis and further restrictive measures. These would impose massive and dire consequences on Russia for its actions…

The European Union will continue to provide strong political, financial and humanitarian assistance to Ukraine and its people.