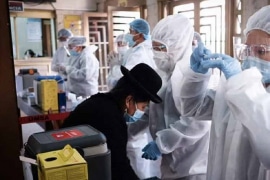 “The weeks that we’ve come across with these variants, which are four, are seeing an extreme increase in the number of cases,” said Freddy Armijo, the national director of epidemiology. Seven Days.

In his statement to the newspaper La Razón, the epidemiologist stressed that the increase continues and that since December 7 there has been a trend of more than a thousand infected every day.

He acknowledged that apparently new subvariants of the SARS-CoV-2 coronavirus appear to be responsible for what he called the sixth outbreak the highland country is facing in nearly three years of the pandemic’s presence.

“We are entering a new wave as two new subvariants, BQ.1 and BQ.1.1, have been detected in the country, which are classified as research variants as per WHO (World Health Organisation)” he expressed did.

He warned that these are 20 to 30 percent more infectious than those identified during the fifth wave.

He explained that, for now, samples taken in the departments of Santa Cruz and La Paz tested positive for these new subvariants, although he stressed that more studies are being done to rule out their presence in other regions of the country. has not been done.

Armijo reiterated that during the de-escalation of the fifth wave it is important to resume relaxed biosecurity measures and to resort to vaccination as the safest way to face a new outbreak.

He described that, for now, the rise of the disease is only starting to accelerate, and that a peak is expected within a month, with behavior similar to that seen during the fifth wave.

Health portfolio figures show the fifth wave at its peak had a total of 204,000 infections and the death rate was the lowest since the outbreak of the disease at just 0.1 per cent.

According to epidemiological forecasts in Bolivia, it is expected that the behavior will be similar during the sixth wave, in contrast to the fourth when positive cases reached 406 thousand.

Pension hike not enough for Venezuelans to afford basic meals

analysis | Trump immediately postponed what is happening in Ukraine

Former hotel housekeeper aims to give voice to French workers