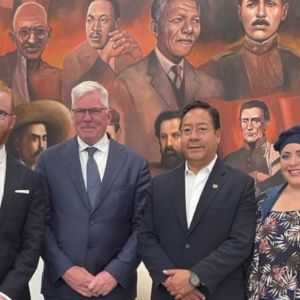 Bolivian President Luis Arce met with a WikiLeaks delegation this Saturday in La Paz, expressing his full support for the release and removal of charges against Julian Assange, the founder of that information platform.

At the meeting, which was also attended by Maria Nella Prada, the Bolivian minister of the presidency, Arce told WikiLeaks editor-in-chief, Kristin Herfansson, and editor Joseph Farrell, “that he fully supports Assange,” the outlet indicated in his on the official Twitter account.

Icelander Herfansson, for his part, published on the same social network that the Bolivian president “adds his voice to those who fight for Assange’s freedom and calls on the United States (USA) to drop the charges against him We do”.

“In a private meeting today, the President discussed the serious implications for freedom of the press if Julian is extradited to the United States,” he added.

Bolivian President Luis Arce @LuchoXBolivia adds his voice to the fighters #assange Freedom and an urge to drop the US charges against him. In a private meeting today, the President spoke of the serious press freedom implications if Julian is extradited to the US pic.twitter.com/J2KRYtj7eT


On his part, the head of state of the South American country said of the appointment: “We agree that the foundation of a democracy is not to condemn the right to speak the truth, as is unfortunately the case with journalist Julian Assange. We hope that their unjust oppression ends soon.”

Today we have representatives from @wikileaks, We agree that one of the foundations of a democracy is not to condemn the right to speak the truth, as is unfortunately the case with journalist Julian Assange. We hope that your undue harassment will end soon. pic.twitter.com/bqjmOvqosm


On 17 June, UK Home Secretary Priti Patel approved Assange’s extradition to the United States, where he could face up to 175 years in prison.

Washington seeks Assange’s extradition from the United Kingdom, where the Australian journalist has been detained since 2019, to try him for 17 alleged offenses in breach of the 1917 Espionage Act and one of computer intrusion.

The charges relate to the disclosure and publication of military reports on Iraq, Afghanistan and the illegal Guantanamo base, as well as diplomatic reports revealing war crimes and other misconduct by US officers and officials.