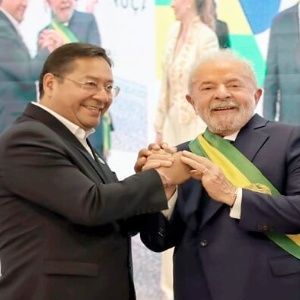 In an exclusive interview for TeleSUR, the Bolivian Head of State expressed that “this stage is very important in the history of our countries. Lula represents the consolidation of all these processes that are taking place in the country and when they exist , so it’s all very conducive to integration”.

“The countries of the region have always faced two obstacles to integrate, and become more related, on the one hand, sometimes we didn’t have the necessary economic stability, and on the other hand, political stability because there were many different governments- Different trends, usually right-wing governments, that implemented neoliberal policies and did not allow dialogue between our countries,” he said.

Furthermore, he remarked that it is possible that when there is greater political engagement, they work together to address the various economic problems, as well as “promote the region so that it becomes a Which shows the whole world that things can be done in a different way than what has been talked about in developed countries.”

The Bolivian President highlighted the changes experienced in the region in recent years with new governments working for the betterment of the populations, including the cases of Colombia, Honduras and Brazil.

“It has been important because today suddenly we have Brazil, a government that we know Comrade Lula has and that we are sure will be at the service of the Brazilian people, where they have suffered a lot in recent years, That’s what many people in many countries and many of our Latin American countries” who have officials who “have not implemented enough policies to address the real problem” are going through.

Today in Brasilia we met the new President #Brazilbrother @LulaOfficialWith whom we decided to deepen a comprehensive work agenda for the benefit of our people, including border issues, gas, power, urea, investment and trade. pic.twitter.com/6cn1Jgr8eI


Arce said he looked forward to improving bilateral relations with the new Brazilian government to discuss various issues of common interest between the neighboring countries.

He also recalled that there were many unresolved doubts about the behavior of former President Jair Bolsonaro in connection with the 2019 coup d’état in Bolivia. “They are doubts, they are hypotheses that we always want to clarify. I said publicly to Mr. Bolsonaro that he has a lot to explain to the Bolivian people.”

On the other hand, he talked about how Bolivia has managed to get back on track after restoring democracy following the 2019 coup. “We experienced this right when we took office in 2020, we didn’t face an administration on the pandemic, they left a lot of people in greater poverty, greater inequality, we had to rebuild the country and it’s easier said than done.” No longer.”

Likewise, he reiterated that through the policies implemented he has achieved good results “including economic results such as low inflation, not only in this region, among the first countries on the planet, Bolivia is demonstrating that the economic management is correct, our We have growth, we are reducing inequality, we are reducing poverty in our country.”

Regarding the Amazon, he expressed that this is one of the issues that should be worked on jointly with Brazil, as he believes that it is important not only to take care and protect that territory, but also to protect the population. The quality of life is also guaranteed to live there..

Medvedev’s fiery day: he argued with the judge, broke his racket and was fired from the Paris master

After US pledge, France refines plan to send troops to Romania