Brazil: Bolsonaro knocks on the door of the barracks. The president would have sought military support to postpone the ballot on Sunday 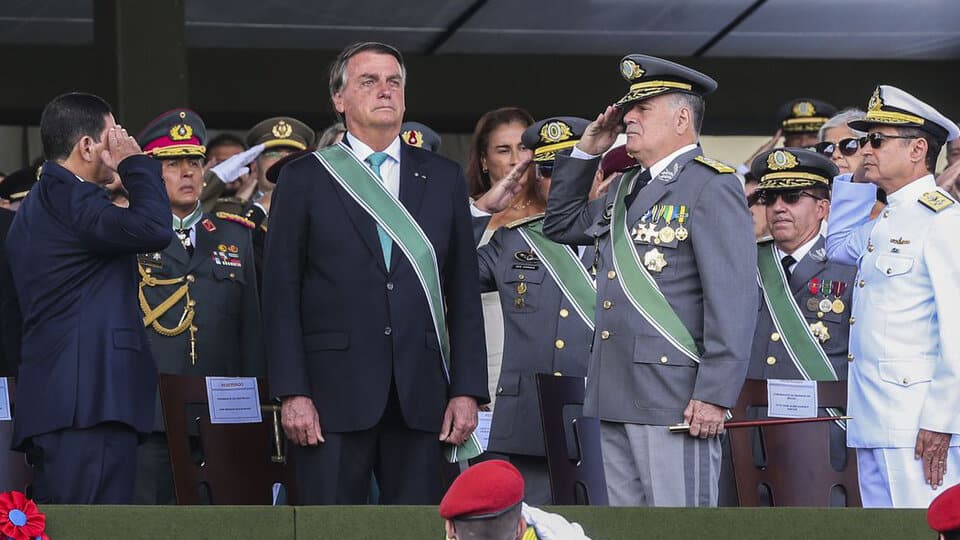 What did they talk about on Wednesday night Jair Bolsonaro and the military leadership during a meeting in Brasilia,

So far there has been no official statement on what was discussed in the emergency meeting held in the last phase of voting next Sunday. It is known that next to the president was the general Paulo Sergio Nogueira de Oliveira You Marco Antonio Freire GomesDefense Minister and Army Commander respectively. In the same meeting the Chief of the Navy was, Almir Garnier Santos and the Chief of the Air Force, Carlos Baptista Jr., i.e. “military contingent”.

candidate for re-election on the same night against whom the election is shown as the loser, by a narrow margin Luiz Inacio Lula da Silva, also spoke with ministers and civic advisers. Government sources confirmed to the agency folhapress and to the channel globenews Organizing these conferences and remarked that the President would have proposed postponing the election from at least July 2021, meeting the threat already outlined in speeches and interviews.

Since his arrival at the Planalto Palace in January 2019, this example of the dictatorship It has adopted a variety of tactics to destroy the institutional system from within. This included everything from questioning electronic ballot boxes to sending a bill to the Legislature that penalizes those responsible for demoscopy companies with prison if their guesses were wrong.

He had previously threatened to shut down Congress and encouraged his shock groups to invade the palace of the Federal Supreme Court, imitating the capture of the Capitol. Donald Trumpof which he is an emulator, in January 2021.

in parentheses: deputy eduardo bolsonaro, recently visiting Argentina, has been one of the agitators of the coup adventure to uphold his father in Planalto. A US commission of inquiry analyzed the deputy’s records for his alleged involvement in an attack on Congress in Washington, the city where he visited the White House in January 2021.

The former president reacted to the face-to-face attacks on who would be his opponent in Sunday’s elections and during the long-awaited televised debate at TV Globo Studios in Rio de Janeiro this Friday. “He (Bolsonaro) wants to create confusion because he’s a little psychologically unstructured (…) He knows he’s going to lose”Declared Petista this Thursday morning.

Polester at night Datafolha reported that Lula has 54 percent of the valid votes, a The percentage is higher than in the previous week, and Bolsonaro has fallen 46 percent, one point.

The proposal by the President to postpone the elections was clearly not a proposal to gain a foothold among civilian members of the government. Representatives of a coalition of right-wing forces known as the “Centro”, which backs the executive in parliament, will not conform to this adventure that could be a hostage to their long-term interests.

Whether Bolsonaro wins or Lula wins on Sunday, “Centrao” will remain powerful. Politicians of the “centrao” are more sensitive to the mood and factual forces of society, read the market, companies and the media, where there is dissatisfaction, not in a homogeneous way, with the ruling regime.

On the other hand, little is known about how the “military party” got the proposal to postpone the vote. The military corporation has been quite organic with the project of the Bolsonist power for which it has been functional. It was displayed at a civil-military parade on 7 September, a commemoration conceived as part of the presidential campaign for re-election, the bicentennial of independence.

As part of this association with Planalto, the Defense Ministry’s pressure on the Electoral Court to audit electronic ballot boxes can be considered. The defense managed to implement biometric controls in the first round of October 2, which delayed the vote and kept a large number of voters away from voting due to long queues. That maneuver may have favored Bolsonaro, as most of the civilians who leave the ranks are usually polite people who are mostly Lula’s voters.

Teacher Sergio Amadeufrom ABC Federal University in So Paulo, told this newspaper that without this “intervention” by the military, Lula, who won 48.4 percent of the vote in the first round, could have been closer to 50 percent, with which she had already cast a ballot. President-elect without necessity.

The researchers clarify that this is a provisional hypothesis, which will only be confirmed with an analysis of how each district voted and closed the polls on October 2. The truth is that out of a total of 156 million, more than 32 million voters left, most of them not going to vote.

The excuse to postpone the election (for how long?) is ridiculous: It is based on an alleged manipulation that has occurred in thousands of radio stations that broadcast election advertisements less from the ruling Liberal Party than from the opposition Workers’ Party.

The complaint was filed in the Superior Electoral Court, which dismissed it for “lack of evidence” regarding this fictitious media conspiracy.And not only that: the Court ordered an inquiry into those responsible for the Liberal Party’s campaign on the suspicion that the allegations were nothing more than an excuse to create riots in the final stretch towards the second election round.