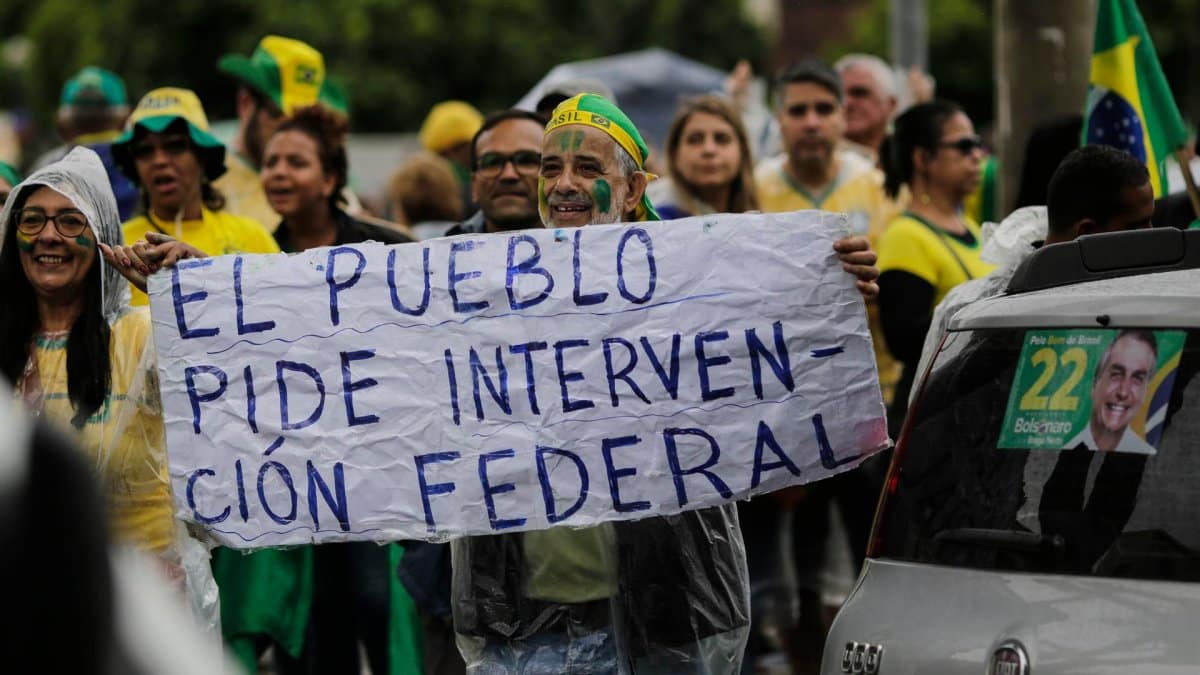 BRASILIA – The Bolsonist movement took to the streets of Brazil this Wednesday, marching to the doors of several barracks and calling for “military intervention” against the election victory of progressive leader Luiz Inácio Lula da Silva.

The demonstrations were widespread and peaceful but clearly anti-democratic, to the extent that they demanded that the armed forces prevent the inauguration of Lula on January 1, who defeated President Jair Bolsonaro by a minimum margin of 1.8 percentage points in the elections last Sunday. was defeated.

The calls were made through social networks, in which far-right groups supporting Bolsonaro are active, and in particular through private messaging services such as WhatsApp and Telegram.

The greatest concentrations were in Rio de Janeiro and So Paulo, and in both cases at the headquarters of the regional command of the army, as in Brasilia, although with fewer people.

The slogan was the same in all respects: “federal intervention”, under Article 34 of the national constitution, which states in one of its points that the central government shall intervene, if necessary and in any way, to guarantee a “republican form”. can. , representative system and democratic governance”.

Posters shown by the demonstrators had the same excuse, and that the Lula government would lead Brazil to “communism” and impose a regime similar to the one in countries such as Venezuela or Nicaragua, which is mentioned on several banners. Loyal to Bolsonaro’s discourse in his election campaign.

He has also condemned an alleged fraud, a hypothesis rejected by the electoral justice system and all parties and institutions that have recognized Lula’s victory, as have hundreds of foreign governments.

This Wednesday, as the Day of the Dead celebrates in Brazil, following mass protests by truck drivers alienated from Bolsonarism, who marched on nearly 600 highways across the country to protest Lula’s victory since last Monday. has been blocked.

According to the Highway Police, this Wednesday, blockades continued at around 150 points in 15 of the country’s 27 states and were only partial in many cases, as they obstructed but did not stop traffic completely.

In some places, such as in the So Paulo city of Barueri, highways were cleared through a resolute intervention by police, who dispersed truck drivers with tear gas, but without any collisions or casualties.

The spirit remained under scrutiny until the very last moment in what was already the closest election in the country’s history.

Ever since Bolsonaro finished admitting his defeat and determined that the government would begin the transition process with Lula’s team, which is scheduled for this Thursday, truck drivers’ protests began to reduce in intensity.

Bolsonaro ruled out the results of this Tuesday’s election, nearly 45 hours after the official count sentenced the progressive leader to victory.

In a brief speech, he said the protest was “a result of the outrage and sense of injustice faced by the election process.”

He affirmed that “peaceful demonstrations” were “welcome”, but stressed that their methods “may not be those of the left, who have always harmed the population”, and stressed that no one would “come and right to go”.

This Wednesday, in front of demonstrations at the gates of the barracks, Bolsonaro remained silent, as did Lula, whose team announced the president-elect would spend “two or three days” on a beach in the country’s northeast. Rest order after a tough election campaign