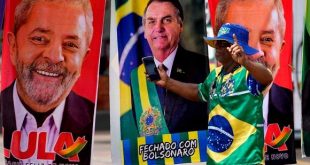 President and Vice President will be elected today; Governors and lieutenant governors of states and federal districts; Senators, Federal Representatives and State Legislators

Voting is to be held in Brazil this Sunday. (Photo: Associated Press)

About 156 million voters in Brazil have been called to vote this Sunday to elect the country’s president for the next term.

The candidates, far-right Jair Bolsonaro and left-wing politician Luiz Inácio Lula da Silva, are considered the favorites based on the latest polls of Brazilian voting intentions.

Voters will have the opportunity to elect their 39th chief executive in history or campaign with their vote four years after the mandate of Bolsonaro, who intends to be re-elected.

Lula, the Workers’ Party’s presidential candidate, and the Liberal Party’s Bolsonaro, led the electorate’s preferences, according to almost all of the voting intentions. The former labor leader’s advantage over the ex-serviceman ranged between 3.7 and 16 points.

According to the latest survey by the Intelligence Research and Strategic Consulting Institute (IPEC) published this Saturday, Lula appears one point (52) down with 51 percent of valid votes compared to the September 27 investigation.

Bolsonaro displays 37 percent bias (he had 34 in the last poll); Former Labor Democratic Party minister Ciro Gomes appears with 5 percent (he had six), and Senator Simone Tebet (Brazilian Democratic Movement) with 5 percent (the same percentage as in the previous poll).

It is not possible to say whether there will be a second round to be held on October 30, indicating IPEC.

Despite the belief of many that Lula could define his victory in this first round, Bolsonaro’s reaction to failure is worrying, as he recently warned that if he did not win, he would risk the outcome. Will not admit and attribute the defeat to “something unusual” that happened in the Superior Electoral Court.

Added to the above is that Bolsonaro, despite assuming power in 2018 via electronic ballot boxes, now doubts the credibility and security of an eclipse that has been in place since 1996, which the president says could be a target of fraud.

Eleven presidential candidates will take part in the election and, according to national law, to be elected, a candidate must obtain an absolute majority, i.e. more than half the valid (excluding blank and void votes).

If none of the applicants meet that criteria, a second round will be scheduled for October 30.

The same criteria apply to elections to governors and municipalities with more than 200,000 residents.

With regard to legislative positions at the federal level, the Chamber of Deputies will have 513 seats and 27 benches, one for each unit of the Federation, out of a total of 81 that make up the Senate.

The federal constitution establishes that every literate citizen, who is born in the country or by naturalization, between the ages of 18 and 70, is obliged to vote.

The referendum is optional for youth between the ages of 16 and 17, those over 70 and illiterate. This means that they can, but are not required by law to exercise their authority.

Only people with electoral residency abroad can vote in presidential elections.

According to the Ministry of Foreign Affairs, only 697 thousand 84 of the 4.4 million Brazilians living abroad are eligible to elect the country’s next president.

It is only possible for those living abroad to enroll for that position. They will be able to nominate chief executives in embassies, consulates and diplomatic missions spread across 159 cities in 97 countries.

Portugal’s capital, Lisbon, is the city with the largest number of Brazilians eligible to exercise their right, with 45.2 thousand voters.

Voting will take place through an electronic ballot box system, which will allow the results to be known a few hours after the voting tables are closed.

(with information from Prensa Latina)