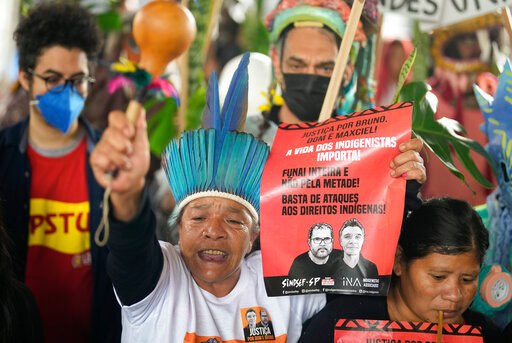 BRASILIA, Brazil ( Associated Press) – Brazil’s federal police said on Saturday that it had arrested a third suspect in the deaths of British journalist Dom Phillips and indigenous expert Bruno Pereira. According to an autopsy, the couple, whose remains were found after going missing nearly two weeks ago, were shot dead.

Police said in a statement that Phillips had been shot in the chest and Perera in the head and abdomen. It added that the autopsy indicated the use of a “shotgun with common hunting ammunition”.

Police said the third suspect, Jefferson da Silva Lima, known as Pelado da Dinha, turned himself in at the police station in Atalia do Norte in the Amazon.

Police said the suspect would be sent for a custodial trial.

Phillips and Pereira were last seen on June 5 on their boat on the Itacai River near the entrance to the Javari Valley indigenous region, which borders Peru and Colombia.

According to a police statement on Saturday, additional remains found at the site near the town of Atalia do Norte were confirmed to belong to 41-year-old indigenous specialist Pereira.

The remains were found on Wednesday after fisherman Pelado confessed to killing the couple, and took police to the spot where they may have buried the bodies. He told the officers that he had used a firearm to carry out the crime.

The remains arrived in the capital Brasilia for forensic examination on Thursday.

The area where Phillips and Pereira went missing has seen violent clashes between fishermen, poachers and government agents.