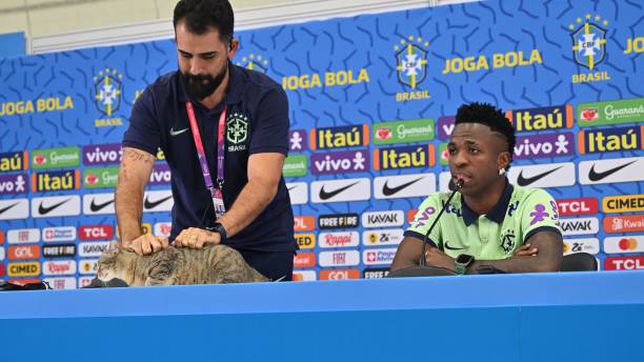 Press conference before the match between Brazil and Croatia in Qatar 2022 World Cup Vinicius Rodrigues, the current press officer of the Brazilian Football Confederation, caused an uproar after he threw ‘Hexa’, a cat who broke into conversation while sitting on a table, to the ground When he met the media.

moment was caught on video and audio-visual It quickly went viral on social media. now five days after the incident The Brazilian Football Confederation received a complaint of animal abuse by Brazil’s National Forum for Animal Protection and Defense, arguing that feline “she was treated indecently”

governing body of the brazil national team Will have to pay a fine of one million reais, which is equivalent to about 200 thousand US dollars, According to various reports, The claim amount will go to the Central Environment Fund. added to it, There is a need for a public retraction for her treatment of the feline, as well as for the environment and animal training for members of the confederation.

by your side, Vinicius denies abusing the animal, “I never tried to attack or mistreat that cat, I may have been wrong to put her on the ground, but I never tried to hurt herI absolutely deny it.” Express.

You may also be interested in: Messi, one step away from Triple Crown in Qatar 2022

The second cat of the World Cup ‘Dave’

‘hexa’ She Wasn’t the Only Cat That Attracted Attention during the World Cup in Qatar 2022, then England defenders Kyle Walker and John Stones adopted a stray cat who they fell in love with during their time at the World Cup. animal already He was baptized with the name of ‘Dave’ and is currently Admitted to a veterinary clinic where he will spend four months in quarantine for tests and vaccinations before going into the care of Walker or Stones.

Serra rallies in the second half, beat Atiwanda Football in double overtime