BREAK: F-18 takes off from Indian carrier with two AGM-84s 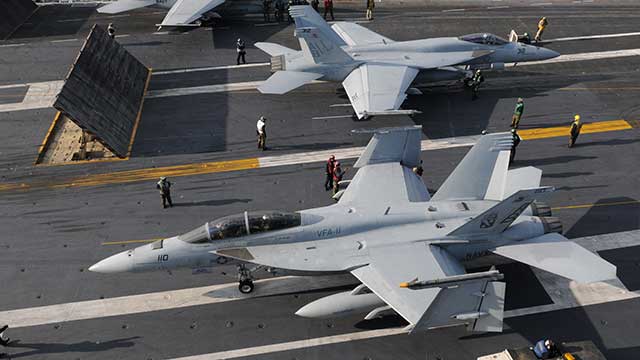 New Delhi ($1=79.75 Indian Rupee) Boeing employees have completed a demonstration of the capability of the F/A-18 Super Hornet aircraft to take off from an Indian aircraft carrier with two AGM-84 Harpoon missiles, which is more than what New Delhi required. [Indian side] For this [its] Multi-Role Carrier Fighter [MRCBF] Program.

This capability was demonstrated at the Indian Navy’s shore-based test facility [SBTF] On the aircraft carrier INS Hansa in Goa, India, from late May to early June 2022, Alan Garcia, vice president of international trade at Boeing India, said in an interview for Janes. The demonstrations were conducted as part of testing to confirm the ability of the F/A-18 product to operate from Indian carriers.

Under the MRCBF programme, the Indian Navy plans to acquire 57 carrier-based fighter aircraft, which will operate on its own. [indigenously developed] Aircraft Carrier [IAC – Indigenous Aircraft Carrier], which after commissioning will be in service as INS Vikrant. The final sea trials of the 37,000-tonne ship were completed in early July 2022. It is to be commissioned in August 2022.

The American fighter has so far operated accurately from the American catobar, but not from the stobar, and India had to demonstrate that it can do so with ease up to the maximum allowable take-off weight. Technically viable work, but operationally everything had to be checked.

Boeing intends to push Russian MiGs out of the Indian market, aiming to deliver the F/A-18 Super Hornet instead of the MiG-29K to New Delhi, and thus equip the Indian Navy’s new aircraft carrier. An attempt by the United States that fits the broader context of Washington’s pressure on New Delhi to ease closer economic, military and energy ties with Russia.

Among the candidates, apart from MiGs, which offer a new batch of MiG-29K/KUB, which have been operating on the Indian aircraft carrier INS Vikramaditya for some time, is Paris with the uploaded version of the Dassault Rafale-M. . [Rafale-Maritime], The fighter is already operating from the French aircraft carrier Charles de Gaulle to the French fleet.

In addition, India is already using Rafale in the Indian Air Force, and French fighter jets have received a remarkable series of orders. [Croatia, the United Arab Emirates, Greece, and Indonesia, as well as Egypt, India, and Qatar] And this, among others, has already been tested in India on take-off from the aforementioned NITKA campus in Hansa.

Follow us everywhere and anytime. BulgarianMilitary.com has a responsive design and you can open the page from any computer, mobile devices or web browser. For more up-to-date news, follow us on Google News, YouTube, Reddit, LinkedIn. Twitter and Facebook page. Subscribe to our newsletter and read our stories in News360App in the Appstore or GooglePlay or in FeedlyApp in the Appstore or GooglePlay. Our Standards: Manifesto and Ethical Principles,

JR Bishop, the football coach who brought near-oriented offense to Naperville Central, Wheaton College, has died at the age of 84

The centuries-long debate on ‘all men are created equal’