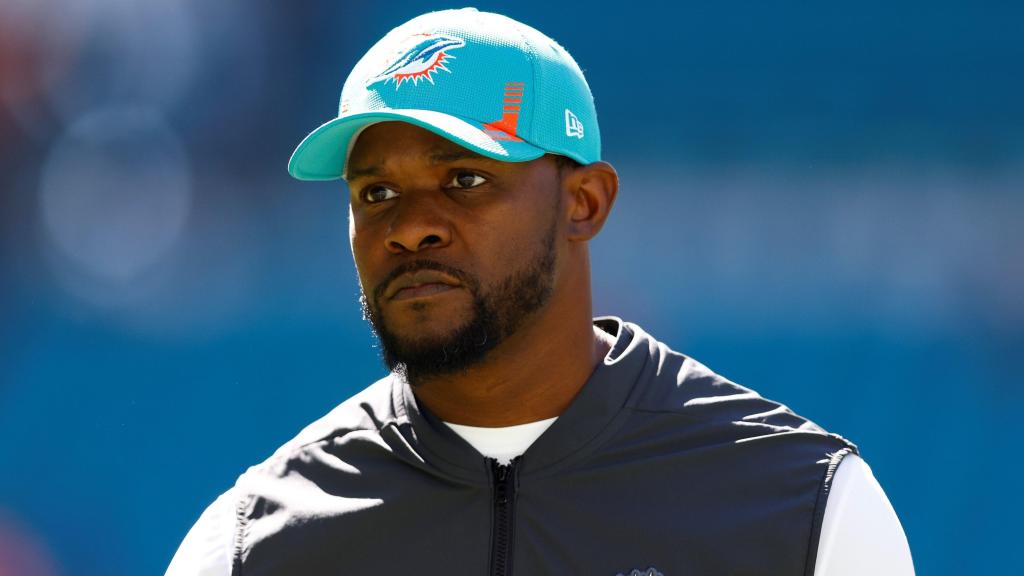 In a series of interviews Wednesday morning, former Dolphins coach Brian Flores called his interview with the Giants “humiliating” and reiterated his account that Miami owner Stephen Ross offered to pay him to lose games.

At the core of Flores’ lawsuit is a fat-thumbed Bill Belichick. Both Flores and new Giants head coach Brian Daboll were Belichick assistants, and Belichick accidentally texted Flores congratulating him on getting the New York job. He meant to text Daboll, and the text went to Flores before he even interviewed with the Giants.

“I was upset that I wasn’t getting a true opportunity,” Flores said on ESPN. “That text confirmed what a lot of us Black, minority coaches already believe—that we’re going into these and they’re shams.”

“It was a range of emotions,” the coach said in a CBS interview. “Humiliation, disbelief, anger. I worked so hard to get to where I am in football, to become a head coach.”

Flores and his lawyers have variously called interviews with the Giants and Broncos a “sham” and a “setup,” but the underlying point is the same: The teams have already selected a white candidate and are just sleepwalking through interviewing a Black candidate to follow the NFL’s Rooney Rule.

The Giants denied on Tuesday that Flores’ interview was a box-checking exercise.

“We are pleased and confident with the process that resulted in the hiring of Brian Daboll,” the team said in a statement. “We interviewed an impressive and diverse group of candidates. The fact of the matter is, Brian Flores was in the conversation to be our head coach until the eleventh hour. Ultimately, we hired the individual we felt was most qualified to be our next head coach.”

As Flores’ lawyers pointed out on ESPN Wednesday morning, that statement does not say that Flores was in the conversation to be head coach by the time he interviewed.

Flores is actually still interviewing for two NFL openings, with the Texans and Saints. He said in his media tour Wednesday that he had informed those teams the lawsuit was coming, but he had not spoken to Belichick since the text messages. He interviewed with the Saints on Tuesday, just before the suit was filed.

TANKING ALLEGATIONS IN MIAMI AND CLEVELAND

Another claim made in the suit is that Dolphins owner Stephen Ross ultimately soured on Flores when he refused his offer of $100,000 per loss when the Miami front office was attempting to tank in 2019.

One of Flores’ lawyers, Douglas Wigdor, said in a CNN interview that there is “corroborating evidence” of the tank bribe.

“That was a conversation about not doing as much as we needed to win football games,” Flores said on ESPN. “Take a flight, go on vacation, I’ll give you $100,000 to lose: Those were his exact words.”

“To attack the integrity of the game, that’s what I felt was happening in that instance, and I wouldn’t stand for it,” Flores told CBS. “I think it hurt my standing within the organization and, ultimately was the reason why I was let go.”

Flores and his lawyers are seeking to turn the lawsuit into a class-action representing other Black coaches. At least one other Black coach strongly implied after the Flores news that he had also been paid to lose games. Former Browns coach Hue Jackson, who had a 1-31 stretch in Cleveland, said he was paid a “good number”per loss by owner Jimmy Haslam.

“I stand with Brian Flores,” Jackson tweeted Wednesday morning. “I can back up every word I’m saying.”

The Dolphins denied Flores’ account of the tanking bribe.

“The implication that we acted in a manner inconsistent with the integrity of the game is incorrect,” the team said in a statement Tuesday.

Flores’ suit says that the most egregious interview came with the Broncos, when GM John Elway and team president Joe Ellis showed up hungover and late. Elway and Ellis “looked completely disheveled, and it was obvious that they had drinking heavily the night before,” according to the suit.

Flores stood by it Wednesday morning, saying the Broncos interview was the only one of nine NFL interviews he’s done where anyone was late. “When you sit at a table with five people who are interviewing you, you can tell who’s asking questions, who’s into the interview and who’s not necessarily in the right state, I would say, in that moment,” he said during his ESPN appearance .