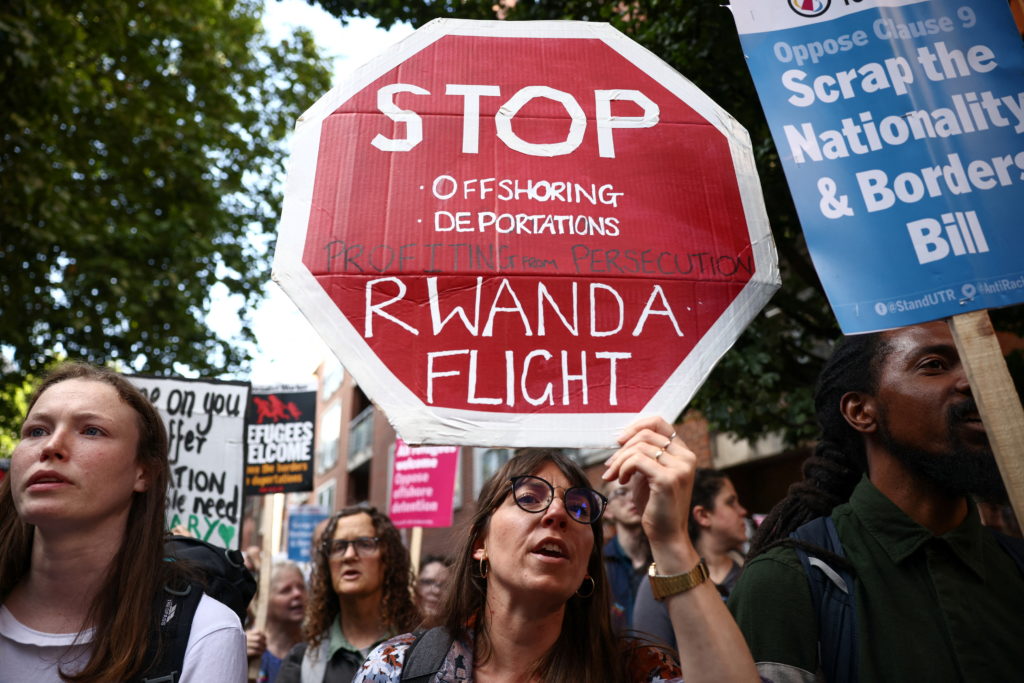 LONDON ( Associated Press) – British Prime Minister Boris Johnson defended his plans to send asylum seekers of various nationalities to Rwanda hours before the first plane took off on Tuesday, saying efforts to block flights were “involved by criminal gangs”. were promoting the work” “Involved in cross-border smuggling of people.

Johnson’s government has reached an agreement with Rwanda to deport people illegally entering Britain from the East African country in exchange for millions of pounds (dollars) in development aid. The government argues that this would prevent people from paying criminals to help them make risky voyages across the English Channel in small boats.

The policy has faced a series of legal challenges and triggered heated protests in the UK, while the government has defended its choice of Rwanda, citing its stability and economic progress since the 1994 genocide, critics say. Has said that stability comes at the cost of political repression. Tensions between Rwanda and Congo also took a worrying turn on Monday, with the Congolese military accusing its neighbor of backing rebels who have captured a city in Congo.

Challenges to deportation continue despite narrow legal issues. Britain’s Supreme Court on Tuesday declined to hear a last-ditch appeal after lower courts refused to halt the deportations. The first flight is expected later in the day, though perhaps with only a handful of people.

The prime minister stressed that the government would not be intimidated by those attacking the strategy and told cabinet ministers that “we are going to go ahead and deliver the plan”.

Johnson said, “I think that what criminal gangs are doing, and those who are effectively promoting criminal gang work, are undermining people’s confidence in the safe and legal system, which can lead to people’s problems.” General acceptance of immigration is declining.”

Every year thousands of people – many reeling from conflict, repressive governments or poverty – try to cross the English Channel in hopes of starting a new life in Britain, with more than 28,000 people – majority from Iran, Iraq and Eritrea – This is how the UK entered last year, up dramatically from 8,500 in 2020. Dozens of people have been killed.

Migrants have long used northern France as a launchpad to reach Britain, a destination favored by many for reasons of language or family ties, or because of the country’s perceived open economy. The British and French governments have worked to curtail the travel, with little bickering and success, and Britain’s exit from the European Union in 2020 strained their relationship and made cooperation even more difficult.

As the first flight draws to a close, opposition to the plan has come from more quarters, including the leadership of the Church of England and, the newspaper report says, Prince Charles. The heir to the throne privately described Rwanda’s policy as “horrendous”, the Times reported over the weekend, citing an unnamed source.

Filippo Grandi, the United Nations High Commissioner for Refugees, also criticized the policy, calling it “all wrong”. Grandi said that if the British government is really interested in saving lives, it should work with other countries to target people traffickers and provide safe passage for asylum seekers.

While a prime precedent is at stake, the number of people immediately affected by the cases has steadily decreased as lawyers challenge the merits of each deportation order. British media reported that the number of migrants scheduled for Tuesday night’s flight is now seven, down from 31 migrants reported last week.

Foreign Secretary Liz Truss said earlier that the first deportation flight to Rwanda would take off on Tuesday, regardless of how many people were on board.

Truss told Sky News, “I can’t say how many people will be on the flight, but the really important thing is that we establish the principles and we begin to break down the business model of these horrific people traffickers.” ,

The remarks came after 25 bishops of the Church of England, including Archbishop Justin Welby of Canterbury, wrote an open letter describing the deportation plans as an “immoral policy that shames Britain”.

The bishops wrote in a letter to the Times of London, “The shame is ours, because our Christian heritage prompts us to treat asylum seekers with compassion, fairness and justice, as we have for centuries.” Is.”