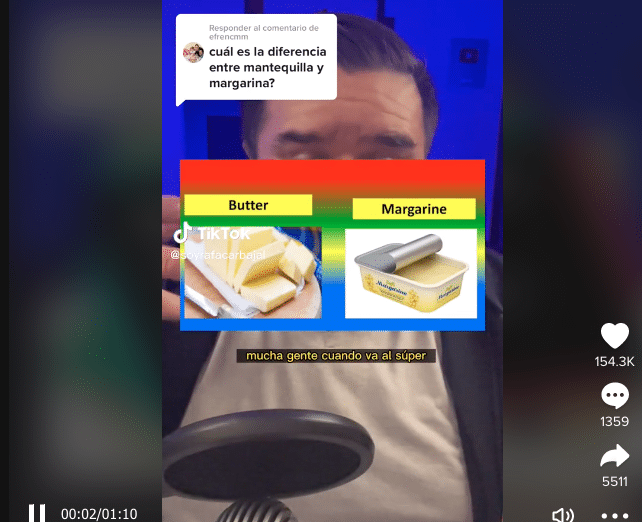 At present, it is thanks to the digital conversation that people can solve all kinds of doubts and questions more easily, that is, in a simpler and more organic way, this is the case of the growing digital conversation in which it is established that what are Difference Between Butter and Margarine Well, for many consumers, these types of products are “generally the same”.

According to data provided by the same sector, a little over 9 million 978 thousand 022 tons of butter are produced worldwide per year. With just over 3 million 797 thousand 550 tons per year, India is the largest producer worldwide topped only by the United States, which produces over 845,665 tons per year.

In third place, with a production of just over 726,193 tonnes per year, Pakistan has become the third largest producer of butter in the world, while Mexico produces just over 20 thousand 900 tons per year which places it as the 43rd powerhouse in terms of butter production.

With regard to the margarine production sector, according to Mordor Intelligence, Explain that the world margarine market will grow at a compound annual rate of 2.86 percent by 2025. This is due to the profitability of the product, as it is generally an economical alternative to butter. Within world trade, Europe is the largest consumer of margarine, ahead of North America, Asia-Pacific, South America and Africa.

Within the current trade, there is growing skepticism about the difference between butter and margarine, the main one being that butter is made from the fat of milk.because basically what is done is to recover the fat and beat it until the desired consistency is achieved whereas Margarine is prepared with vegetable oils through a process called hydrogenation.Where oil is fed into a reactor with hydrogen and nickel at high pressure and temperature, which modify the molecular structure of the oil, making it solid from being liquid at room temperature.

However, in the present context, most consumers do not know how to differentiate between one and the other, even though they have various benefits since margarine,Being made from vegetable oils, it contains “good” unsaturated fats, (polyunsaturated and monounsaturated fats), fats that allow you to lower low-density lipoprotein (LDL) cholesterol, or “bad” cholesterol when replaced by saturated fat, Whereas butter made from natural fats may contain saturated fat.

For consumers, it is essential to know what differentiates each item or service they consume, because it is in this way that the current business panorama can be expanded.

Chicago Bears fined for too much contact in OTAs from young players eager to prove themselves: ‘They’re flying around’

The new MADD movement: Parents rise up against drug deaths