Campus tour and boat tour by Alvarez and McAllister with Batistuta 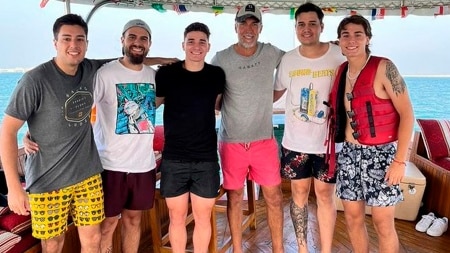 Lionel Messi And a part of the Argentine national team footballers visited Qatar University.While others, such as Alexis McAllister and Julian Alvarez, opted to skip the squad on the first day during the Qatar 2022 World Cup and take a boat trip in the company of Gabriel Batistuta.

After the win against Australia and qualifying for the quarter-finals, Lionel Scaloni’s coaching staff had a day off and the footballers took advantage of it in different ways to recharge their batteries.

The return to activity will take place this Monday, with a training session scheduled for 12:00 (Qatar 18), with the first 15 minutes open to the media.

Meanwhile, the team captain received his family at Qatar University facilities, as did Nicolás Otamendi and Alejandro “Papu” Gómez.

Others, Julian Alvarez and Alexis McAllister he chose to give up concentration and He took a boat trip with Gabriel Batistuta, “Beach with Julian and Alexis”, published “Bati”, Argentina’s current goalscorer in the World Cup, with ten goals, one more than Messi.

Another who decided to leave Qatar University was the midfielder leandro paredesWho? She uploaded pictures with her family at one of Doha’s exclusive beaches,

Archer Emiliano “Dibu” Martínez, for his part, ate a barbecue and then went on a tour of the desert. with family and friends.

Initially, the coaching staff’s idea was to schedule a light practice as was the case after each World Cup game, but the five days leading up to Friday allowed them to have a day off.

The break was celebrated by Scaloni, who reiterated his anger at the short recovery times between Poland and Australia, as well as captain Lionel Messi.

“These days are going to come in handy because we wore ourselves out against two very physical teams,” said the Rosario star, who along with Emiliano Martinez, Nicolas Otamendi has been among those to have played every minute since his debut against Saudi Arabia. Were one. and Rodrigo DePaul.

The Argentine team settled at Qatar University during the early hours of 17 November, when it arrived from Abu Dhabi, where it played the last friendly before the World Cup against the United Arab Emirates (5–0), and since then its members Only they came out for the match and press conference in the media center set up at QNCC (Qatar National Convention Centre).

Next Friday’s match against the Netherlands will be played at 4:00 pm (22:00 in Qatar) and will take place at the Lusail Stadium, the largest of the 2022 Qatar World Cup with a capacity of 88,966 spectators.

US bond yields rise as concerns over Fed policy rise

Thousands of people across Canada protest COVID-19 restrictions and authorizations

Could Los Angeles Become Carbon Neutral by 2030? The city council may raise an issue.