Can the art of Guadalupe Maravilla really help rehabilitate cancer patients and those who have suffered trauma? 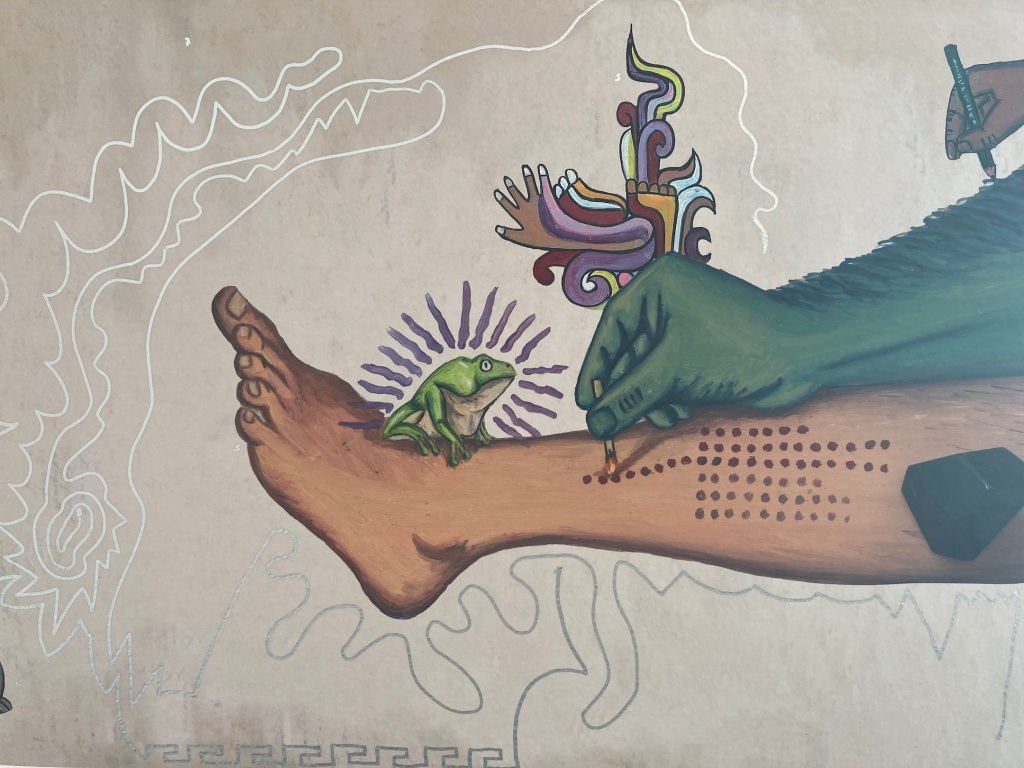 Artist Guadalupe Maravilla describes his sculptures as “healing tools,” but they don’t seem so eclectic when you first encounter them. They look fierce, like monsters or aliens, or perhaps some mythical beast that has swallowed all the objects in their path and now holds them in their exposed interiors.

The only visible indication of his genuine, helpful nature is in the series of clocks that hang on the scaffolding set behind him in Marvilla’s current exhibition at the Denver Museum of Contemporary Art. Musically, metal drums are known for their loud bangs, but also for the dull, peaceful vocals that capture our attention moments after hitting a mallet.

In fact, gongs are a key element to the “sound baths” that Maravilla organizes around his creations, special ceremonies aimed at helping people move beyond trauma and pain and toward a more robust existence. In this way, the sculptures double as both objects of art and as altars – not exactly religious, but certainly sacred and ceremonial in nature.

And likewise, Maravilla herself is presented throughout the show as a performer and a magician, a holder of knowledge and experience that can benefit others. MCA will organize two of his functions on 16 and 17 July.

It’s a long way from sculptor to priest, and it’s easy to doubt the leap, especially if you love sci-fi movies and know they’re all smoke and mirrors. But Maravilla’s biography – here inseparable from his work – gives some credibility.

The artist, now in his mid-40s, immigrated to the United States from El Salvador in the 1980s as an early wave of immigrant children from Latin America. Three decades later, these waves are certainly on, and media reports are filled with disturbing images of desperate, yet shockingly brave, young people risking it all to travel north, only to is greeted by rejection, imprisonment, or exile. The “swallowed” items in Maravilla’s works are actually items he picked up on the side of the road while taking his original trek back to America decades ago.

The artist is also a cancer survivor who was diagnosed with colon cancer during his college years. We don’t need media reports to understand the challenges of dealing with the physical and emotional difficulties of dealing with a life-threatening illness, especially for someone who is only on the verge of adulthood.

Maravilla connects those two difficult journeys through their common element – ​​human trauma and the need to persevere through it – and the purpose of their work, and their celebrations, to help others move forward. He does not claim to cure cancer or eliminate trauma, only to “help”, and he is clear about this, although the talented artist’s aura as artist-survivor permeates the work.

It also creates work for the visitors of MCA. How do we consume these goods? Sacred or secular, playful or sad, in the form of artifacts or totem?

It doesn’t help that the sensational presence of larger-than-life works thwarts their function; They don’t look like healing devices. They look like props. To understand them you have to know the story behind them – the story of Marvilla.

Of course, fans of contemporary art are used to that constraint and are usually more than willing to go along for the ride. We do not expect art to be formally exposed; We do not believe that we will “get” it unless we have some knowledge of the process or the idea behind it. In a way, that’s what makes contemporary art so challenging and ultimately satisfying. We love to explore it, collecting clues that artists leave on our way.

But the disconnect is big for me. It is a distraction. Sensationalism may override intention here.

Curator Larry Osei-Mensah adds some context to the show and Marvilla’s overall efforts by placing two additional works beyond the three big “disease throwers” on display.

The first is a mural painted by the artist directly on the wall of the MCA. As the accompanying text explains, it is based on the children’s game Tripa Chuka, where each player must draw lines on paper that can never cross, and the mural paints a series of marker lines and images consisting of two- There is the appearance of a dimensional labyrinth.

Maravilla notes that he played the game with others on his first trip from El Salvador, and so the fresco adds to the immigration story at the center of the exhibition and also helps the artist revel in the revelations. He is not a watcher here but a child who has played the game, and it has stuck with him as a tool for coping with trauma.

There is also a version of a Retablo painting, one in a series that Maravilla created with fourth-generation Retablo painter Daniel Wilchis. Maravilla has made it his own – replacing the European-focused religious imagery commonly found in traditional retablos that hang in Catholic churches with images associated with Latino or Latin American indigenous cultures. For example, instead of the Fair Virgin Mary, this painting depicts people with brown skin, volcanoes and corn.

In some ways, this piece, too, personifies the artist: there is a long line of humble, working illustrators who offered Retblow. At the same time, it is still a sacred object; A suggestion is made in such a work that the artist creating it has, or aims to possess, a special, divine connection to the universe.

Maybe he does. Perhaps there is some unique power in Maravilla’s pieces, or maybe it is the simple fact that he creates them, believes in them and surrounds them with sound bathing ceremonies that fill them with a force that stuns people. Really able to fix.

If a piece of art can provide real hope, or help, then it is truly a valuable piece of art.