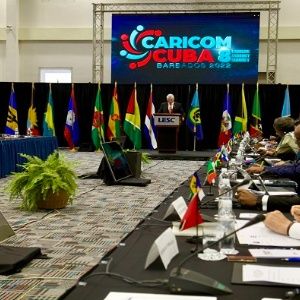 The eighth CARICOM-Cuba summit on Tuesday adopted the Bridgetown Declaration, which calls for an immediate end to the economic, commercial and financial blockade that the United States of America (USA) has imposed against Cuba for more than 60 years.

As confirmed by the Cuban Foreign Minister, Bruno Rodríguez Parrilla, on his Twitter social network account, the signatories of the document refuse to impose draconian measures unilaterally.

The Cuban delegation participating in the meeting was led by President Miguel Díaz-Canel, who assured that the meeting was a testimony to the deep bonds of brotherhood between the Caribbean countries that go beyond formal ties.

Similarly, the Cuban President and Heads of Delegation attending the summit paid tribute to the martyrs who died in Barbados and declared October 6 as the CARICOM-Cuba Day Against Terrorism in their memory.

The VIII summit coincides with the 50th anniversary of the establishment of diplomatic relations between Cuba and Barbados, Guyana, Jamaica and Trinidad and Tobago, the first independent territories in the English-speaking Caribbean.

since. Cuba maintains relations of respect, equality, cooperation and solidarity with representatives of the States of this Community at the highest level.

Mandatory evacuation will be announced in many more areas: which areas residents should prepare