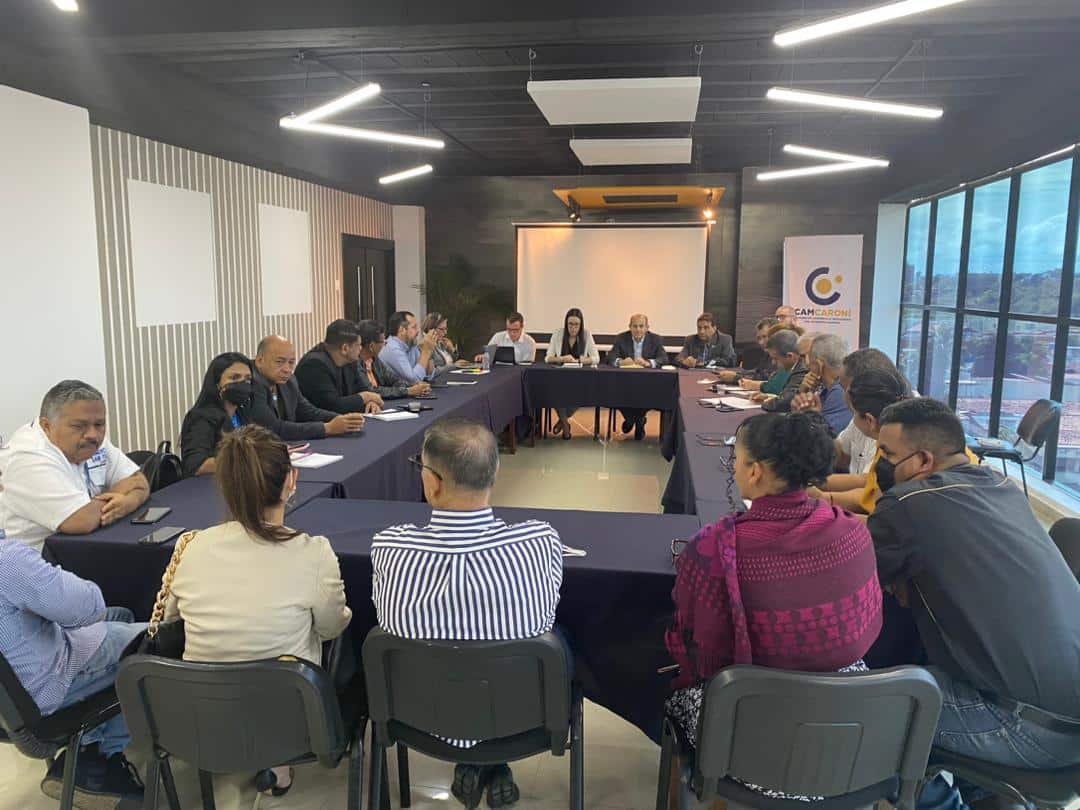 Courtesy of Camcaroni Press , Representatives of the circles expressed their concern

The Chamber of Commerce and Industries of the Municipality of Caroni (Camcaroni), concerned about the concern of its partners and businessmen about the amount in the collection of urban cleaning and the rush to catch municipal taxes, convened an institutional meeting with the Board of Waste Director of the collecting company Fospuka.

The private meeting was held at the Camcaroni commercial building, where the President of Fospuca, José Simón Ellarba, was present; Austerio González, President of Fedemarás Bolivar; Camcaroni’s president, Catherine Wilson, as well as representatives from other base chambers: Camindustrias, Assocomercio San Félix, Construction Chamber, Chamber of Tourism, Real Estate Chamber and some associates.

The cost of urban sanitation service, both in terms of collection and sanitary landfill, has created “anguish and uncertainty among traders”, he indicated in a press release. They claim not to make enough profit to pay the bills raised by the private company.

The majority of claims revolve around the lack of knowledge on billing dynamics, concepts, calculations and that they feel disoriented amid the urgency of paying for urban cleaning service.

Faced with repeated claims from merchants and businessmen in the city, union leaders acted as spokesmen for the complaints and informed the president of Fospuca, José Simón Ellarba.

“It is our duty and our obligation to find a way to make the productivity process of our companies and our state as viable as possible. We have always had that vision, both the officials who own Fospuca and the business sector. Looking for solutions match; we have to eliminate the imperatives of communication. Suddenly there are things that we see one way, but we can understand a lot from the conversation. There are two sides to the coin and it is necessary to hear both the versions” , explained Austerio González, president of Fedecameras Bolivar.

Camcaroni’s president, Catherine Wilson, recognized the work being done by Fospuca in the city, noting the undeniable change that occurred in less than 40 days, however, she stressed that Guyana “is in crisis” and it has an impact on commercial Activity and local business.

“Ciudad Guayana is in crisis and we can see that with the long lines to fill up with petrol; This clearly has an impact on business and professional activities. We want private economic activity to continue to grow and that is why we insist on agreements, as we have done for clinics, hotels and education since the beginning.

Wilson lamented that the mayor of Caroni, Tito Oviedo, and the director of the Municipal Chamber were not present at the meeting, although they had councilor Aliana Estrada in attendance.

Representatives of the Chambers expressed concern about the area they represent. Such is the case of Miguel Gómez, president of Ascomercio San Félix, who stressed the need for an awareness campaign to encourage tax culture among traders, and to disseminate more information about the collection scheme practiced by Fospuca.

The representative of the Chamber of Tourism, Linoris Fermin, proposed an average of the collection of the lodging sector, as she assures that they are the most affected in relation to the billing of urban cleaning and the consequences of the COVID-19 pandemic, so much so that many areas has expressed its intention to close its doors.

Chamber of Liquor President Franklin Fernandez stressed the need to review the collection formula used by Fospuca, and if necessary, create a consensus that allows for a win-win. He stressed that there is disagreement in this area, but complaints are made anonymously for fear of retribution.

Juan Pablo Paris, president of Camindustrias Bolívar, insisted his region’s economic movement is practically nil. He insisted that the amount billed by Fospuka so far is exorbitant, which is impossible to pay. “We are paying more than we consume,” Paris said in a request to review matters raised at that meeting and reach agreements that allow the regions to develop.

Catherine Wilson, before an intense debate with each of the representatives of the base chambers, raised a series of options that, in her opinion, would bring benefits to the commercial sector of Ciudad Guayana, which were well received by the President of Fospuca.

The solid waste collection company agreed to give a 40% discount to those who have bills of two hundred ($200) dollars or more for a year; Billing by Jan 2023.

Another option, promoted by Camcaroni and endorsed by Fospuca, concerns the billing of sanitary landfills. Those who wish may request that the collection of this concept be issued by Fospuca Caroni, and not by Corpoilec, with the obligation to pay 60% of the total amount for urban cleaning, for sanitary landfills, in foreign currency For more modalities you would like.

Customers who accept this modus operandi will have to make a formal request through contact channels with Fospuca before 25 December.

From the trade union they request an extension of the period to pay for the urban cleaning service, without generating fines, as well as define the date of completion a special day that allows traders to clarify doubts , accompanied by representatives of the Fospuka company.

Both Fedecmaras Bolivar and Camcaroni seek the general benefit of their partners and the commercial and business sector in general of the State of Bolivar. Both instructions expressed their gratitude to Fospuka for their attention and receptivity in their approach, thus sealing the brotherhood ties and pointing to a common objective, unity and economic growth of the country.

Mobile Banking Vs Traditional Banks: How the Banking Sector is Bridging the Gap

Good Friends, Spieth and Thomas Have the Same Masters Goal